The 1891 silver dollar was minted over 100 years ago and is now a valuable collector’s item. In this blog post, we will take a closer look at the history, features, and value of the 1891 silver dollar. We will also explore some of the rarest errors of this coin and discuss how much they sold for at auction.

So, if you’re curious about the 1891 silver dollar value, keep reading! It just may surprise you.

History of the 1891 Silver Dollar

Before we look at anything else, let’s take a look at the history of the 1891 silver dollar.

The 1891 silver dollar was minted in the United States of America during the year 1891. It was part of a series of coins called “Morgan” dollars, which were minted from 1878 to 1904.

Before the Morgan dollar, there was the Seated Liberty dollar, a silver dollar coin featuring Lady Liberty’s full body, seated with a flag in one hand and a shield in the other. However, it was time for a new design, so they hired George T. Morgan to create the Morgan dollar, which featured his iconic Lady Liberty bust profile design on the obverse side. The reverse side showcased an eagle with wings outstretched clutching arrows and olive branches in its talons.

George T. Morgan was a renowned coin designer in London who had promising potential but not a lot of room to advance his career. He took a position as an Assistant Engraver at the Philadelphia location of the US Mint in order to move up in the engraving world. The woman who sat for the Lady Liberty profile was Anna Willess Williams, a quiet school teacher who preferred to keep her life private and who struggled with the fame she received after the coin was released.

George T. Morgan was just 30 years old when he designed this coin. After this, he became famous for his intricate and detailed designs. He designed seven different coins, but the Morgan dollar is the most recognizable and is highly sought after by current coin collectors (who are also called numismatists).

Features of the 1891 Silver Dollar

The Obverse of the 1891 Silver Dollar 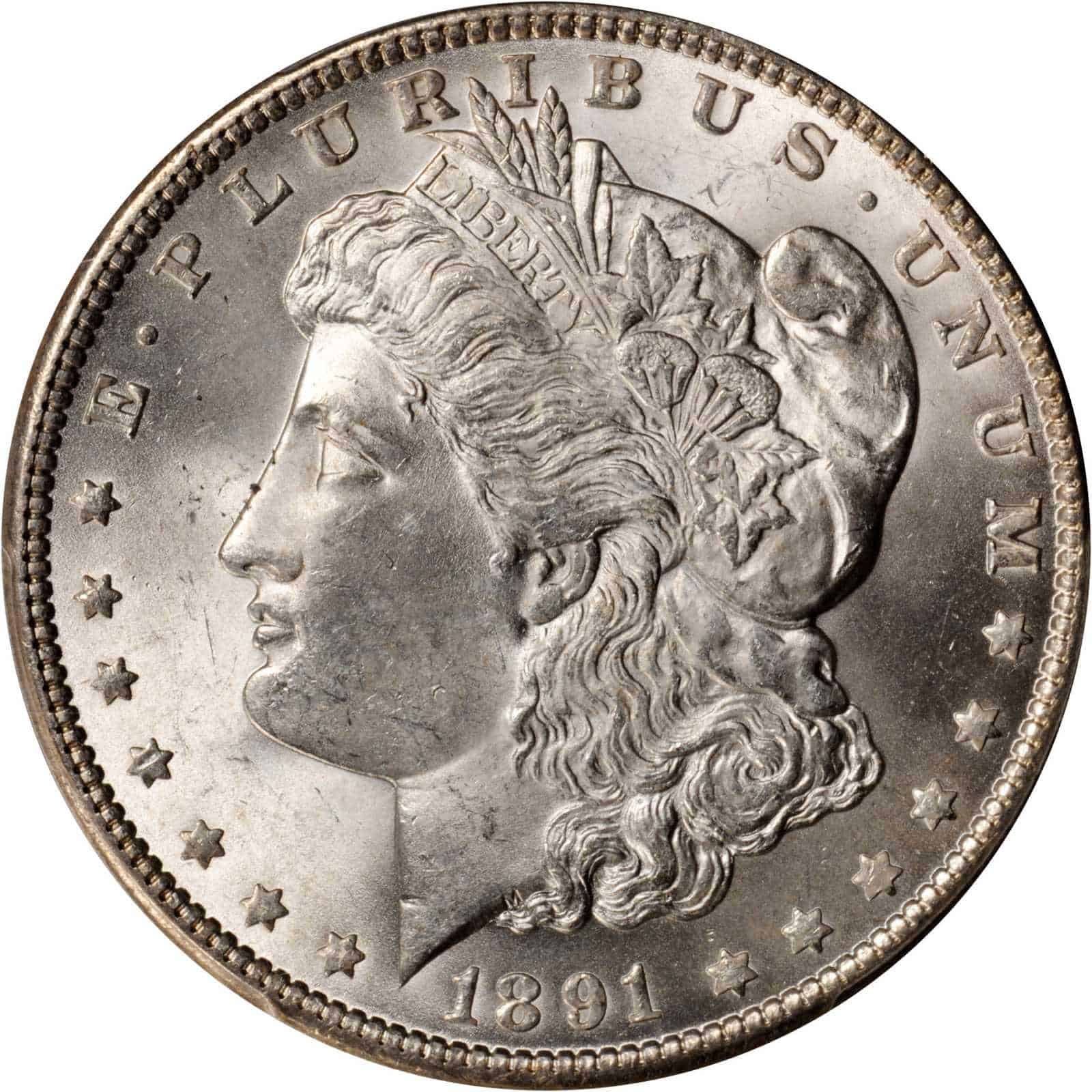 The obverse side depicts Lady Liberty wearing a crown-like headdress. On the crown portion, there is the word “LIBERTY” inscribed. The headdress also contains flowers, leaves, and stalks of wheat, which symbolize prosperity. With her headdress, she is wearing a Phrygian cap, which was widely associated with freedom throughout Ancient Greece.

Staring to the left, Lady Liberty has soft wavy hair and a strong but gentle gaze.

Around the rim of the coin are thirteen stars, symbolizing the original thirteen colonies, as well as the phrase, “E PLURIBUS UNUM” (meaning “Out of Many, One”), arcing over the top. Also included on the bottom is the date of 1891.

The Reverse of the 1891 Silver Dollar 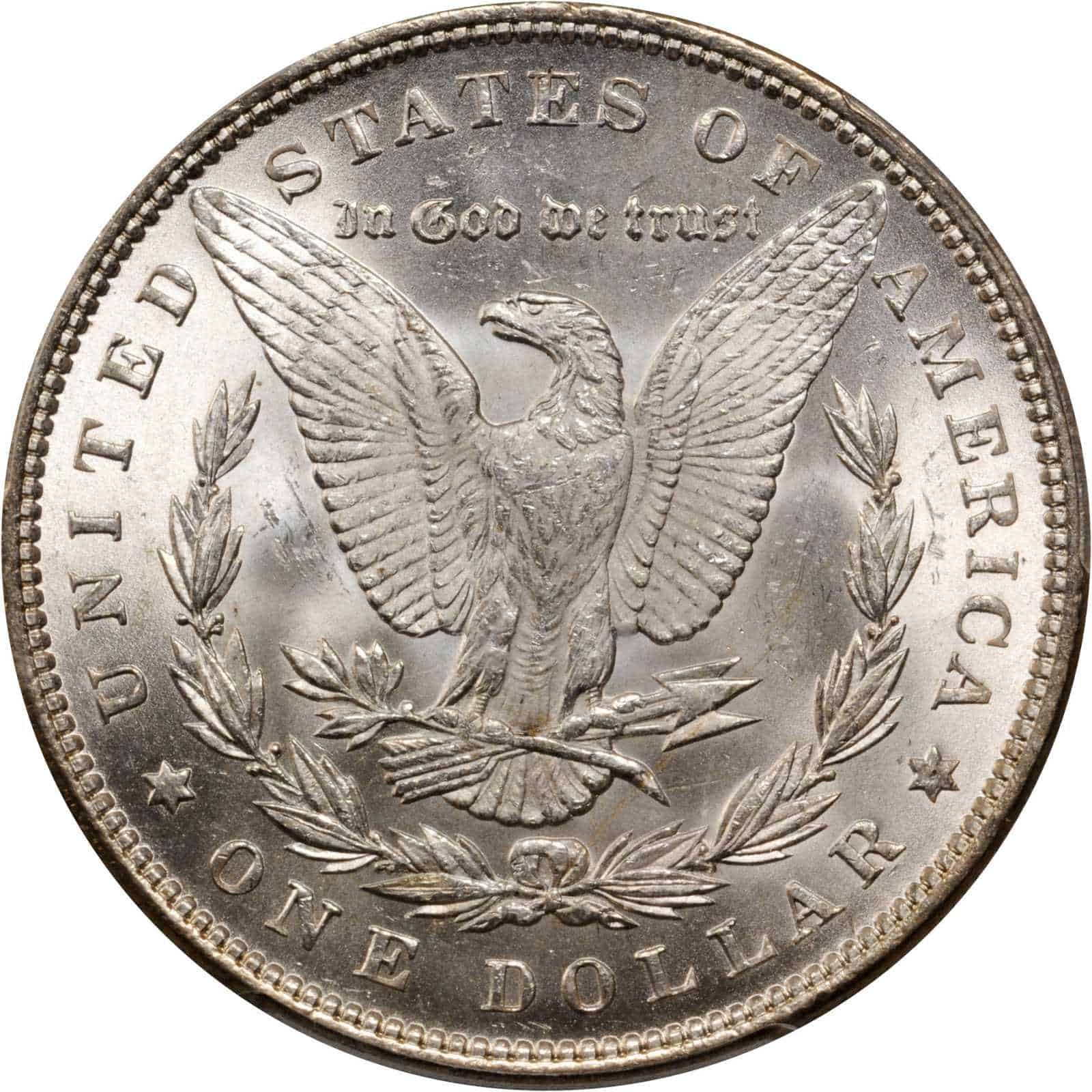 The reverse side showcases an eagle with its wings outstretched and clutching a cluster of arrows and olive branches in its talons.

Above and around the eagle are the words “UNITED STATES OF AMERICA”, directly above his head is the phrase, “IN GOD WE TRUST”, and beneath it is a half wreath of olive branches. The value “ONE DOLLAR” is inscribed at the very bottom.

On both sides, the rim has a reeded edge all the way around to distinguish from other coins its size. And if there is a mint mark, you will find it near the bottom center, beneath the half wreath and between the D and the O on the word DOLLAR.

Other Features of the 1891 Silver Dollar

Let’s also look at some other features of the 1891 silver dollar, including its metal composition, its mint marks, and its size and weight.

There were four different US Mint locations that produced the 1891 silver dollar, including the locations of Philadelphia (no mint mark), San Francisco (S), Carson City (CC), and New Orleans (O). As we mentioned before, on the coin, the mint mark is located beneath the eagle on the reverse side.

Value of the 1891 Silver Dollar

Now that we know more about the history and features of this incredible coin, let’s discuss the 1891 silver dollar value, categorized by each US Mint location. 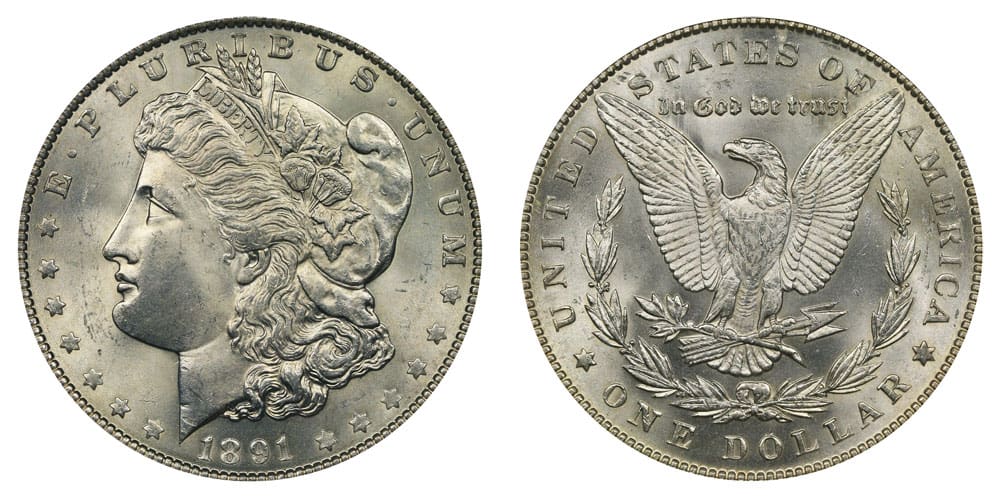 The 1891 silver dollar with no mint mark was minted in the US Mint location of Philadelphia, Pennsylvania. With 8,694,206 silver dollars printed here in 1891, it is the most common out of all four variations.

With that being said, its value depends on the condition it is in, from Good, Fine, Extremely Fine, to Uncirculated.

An 1891 (no mint mark) silver dollar will bring in about $29 if it is in Good condition. It will be worth about $40 if it is in Fine condition, and will be worth about $48 if it’s in Extremely Fine condition. The biggest value is in the Uncirculated value, which can range from around $55 to $9,140, depending on how pristine it is. Or at auction, recently a pristine no mint mark silver dollar from 1891 sold for an amazing $13,000! 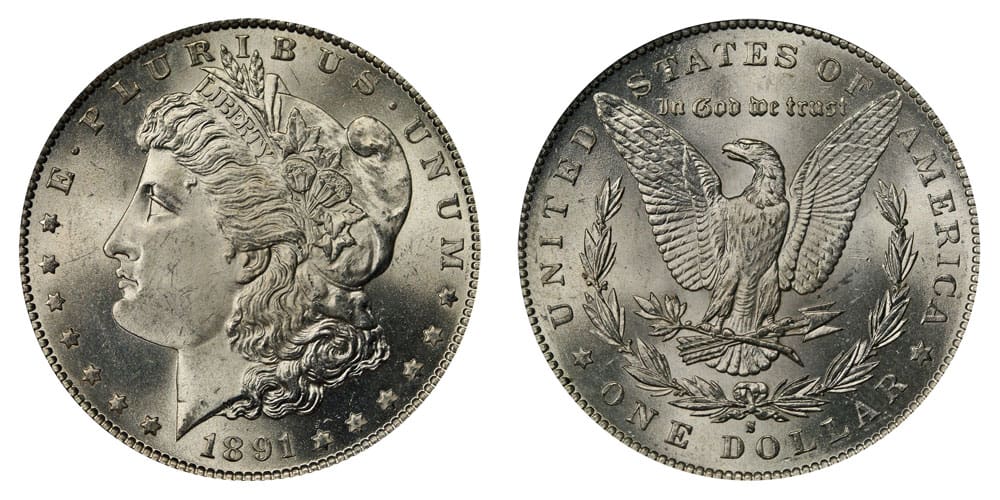 The 1891 “S” silver dollar was minted in the US Mint location of San Francisco, California. A total of 5,296,000 silver dollars were printed here in 1891, making it the third most common out of all four variations. 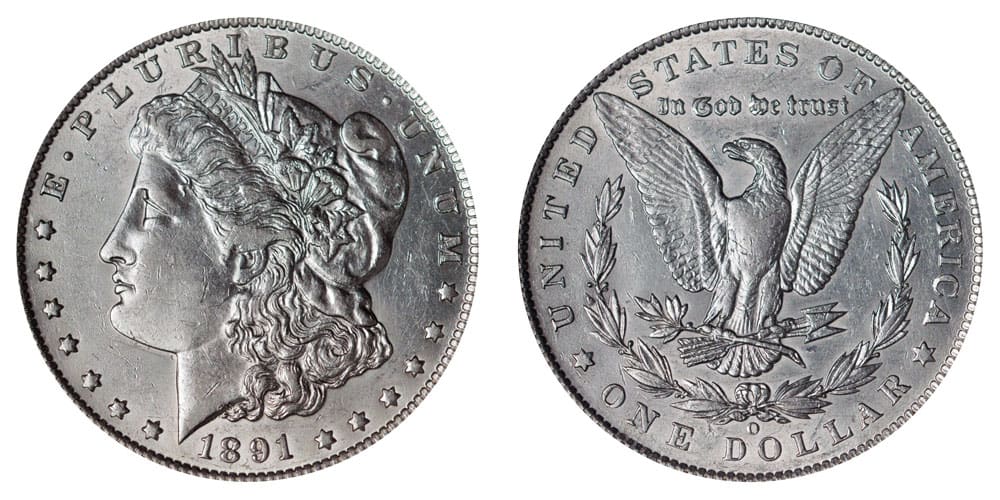 The 1891 “O” silver dollar was minted at the New Orleans US Mint location and features an “O” mint mark beneath the eagle on the reverse side of the coin. This is an interesting coin to watch out for since this location was only used to mint US coins from 1838 to 1861 and again from 1879 to 1909. There were 7,954,529 silver dollars minted here in 1891, making it the second most used location. 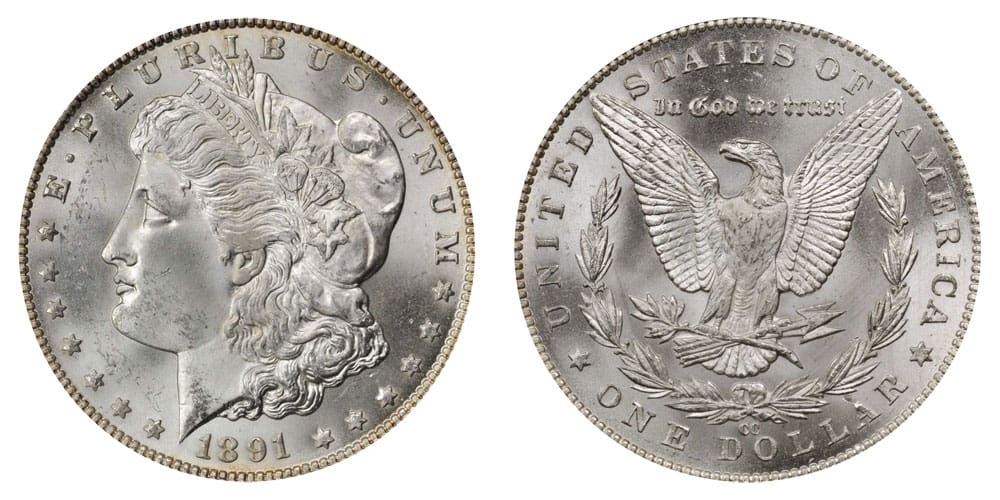 The 1891 “CC” silver dollar was minted in Carson City, Nevada and features a “CC” mint mark beneath the eagle on the reverse side of the coin. This is one of the rarest coins in its series at 1,618,000 coins, and thus, it has a lot of value. It’s also interesting to note that Carson City only had a US Mint for a very short amount of time, making anything minted there a unique treasure.

However, one “CC” coin in Fine condition recently sold for $190, which is more than it’s worth – so you just never know what a Morgan dollar will sell for if you take it to auction! 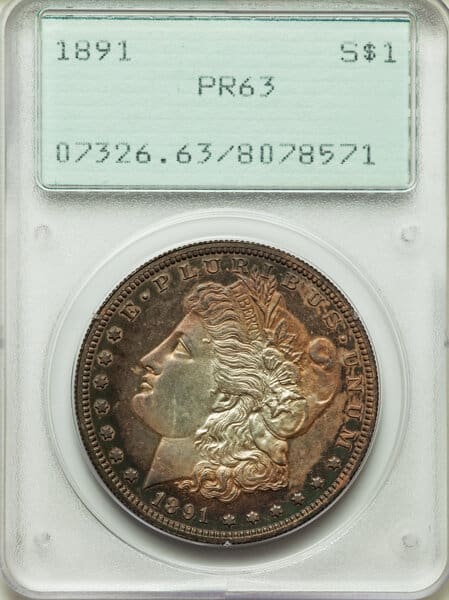 The 1891 proof silver dollar is truly a rare and valuable coin. Proof coins are specially made coins with a higher standard of quality, and are made for collectors.

The Morgan dollars only had around 500 to 1000 proofs made of each year. For 1891, only 650 proofs were made. They were minted at the Philadelphia US Mint location.

Thus, it has a lot of value when found in any condition.

It is important to note that there have been some errors 1891 silver dollars found. These can range from minor errors like missing or weak letters on the coin, to major errors such as having an extra leaf in the wreath. While these coins are still legal tender, they bring in a higher value due to their rarity and will add a nice addition to any collection.

Let’s look at a few 1891 silver dollar error coins that have been found and sold over the past several years.

One error coin that you might find for the 1891 silver dollar is a double die error, which means that the two sides of the coin were made twice each. This will especially be noticeable in the lettering, where you will see double letters or words, or in the fine details of the image, such as on Lady Liberty’s ear.

One example of an 1891 silver dollar double die error coin was sold recently for $200 – however, it wasn’t in great condition, so if it had been pristine, it would have sold for a lot more! 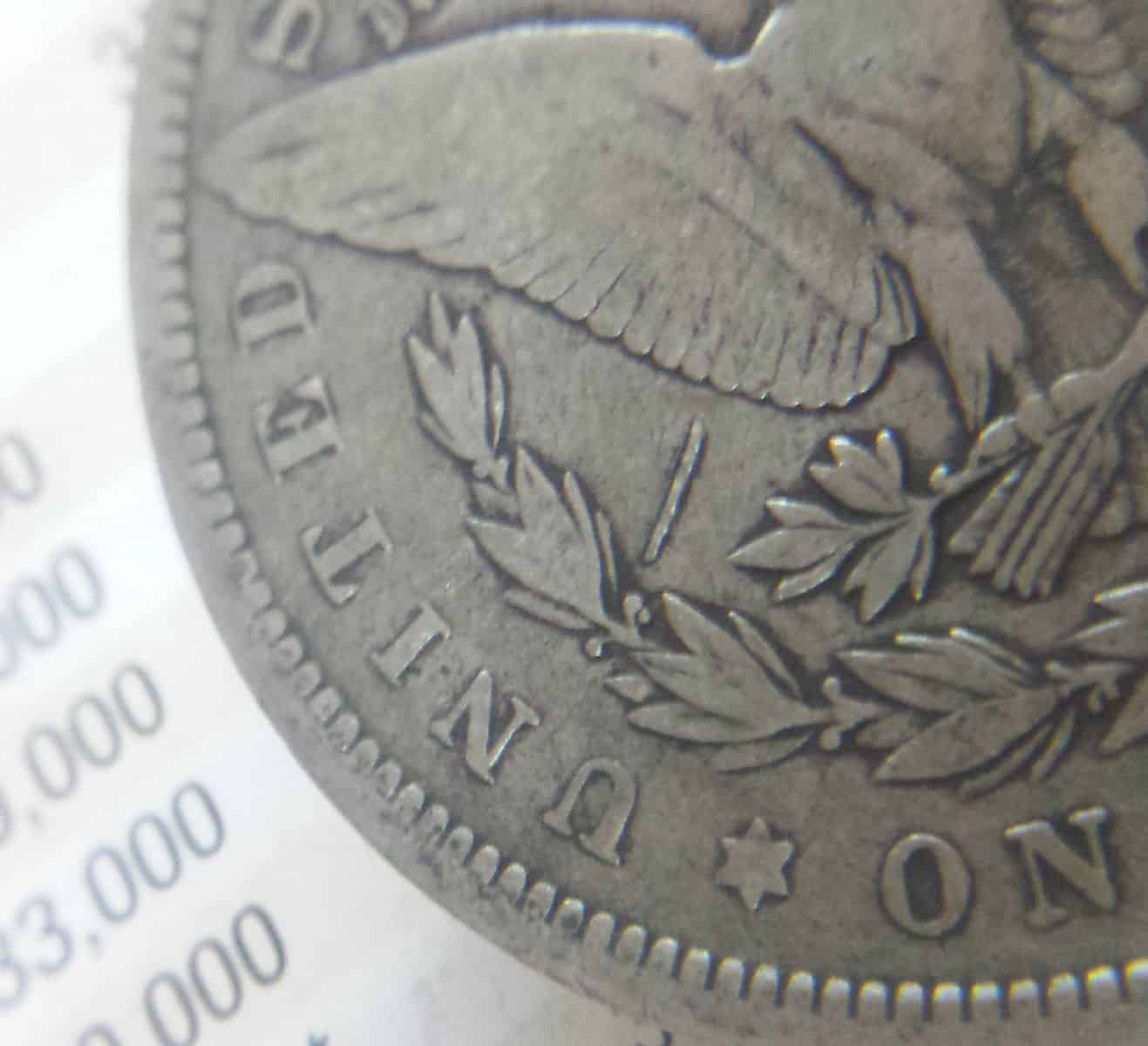 Another error coin that you might find is the 1891 silver dollar with “spitting eagle” error. This type of error occurs when a portion of the die on the reverse has a tiny chip in it. Ironically, it looks like a “drip” that is coming directly out of the eagle’s mouth on the reverse side of the coin.

Another detail that makes this rare error even more rare is that it was minted at Carson City, where the least amount of silver dollars were minted in 1891. A third reason it is so rare is because this particular coin was in near-perfect condition.

Now that you know more about the 1891 silver dollar and its value, let’s take a look at some of the most frequently asked questions about this coin.

Yes, a 1891 silver dollar is considered to be very valuable and can be worth hundreds or thousands of dollars depending on its condition, mint mark, and any errors.

What Are Some Common Errors Found on Coins?

Some of the most common errors found on coins are double die errors, off center errors, and broad strike errors, for example. These types of errors can add to the value of a coin, so it is important to keep an eye out for them when collecting coins.

If you are lucky enough to possess one of these coins, you should consider having it appraised by a professional. That way, you can get an accurate value for your 1891 silver dollar. Good luck!

Do you have one of these coins? Let us know about it in the comments below!

I have a 1891 P error Morgan Dollar with an S on lady liberty's face and letters on the reverse as well.is there anyone that can help me get the true value of my coin?