The Morgan dollar, issued from 1978 to 1904, is one of the most collected coins in the world. We’re going to look at the thirteenth coin in the series.

We’ll explore the 1890 silver dollar value. And we’ll look at its history, design and some of the interesting errors and varieties out there.

So if you’re ready, step this way to learn more …

History of the 1890 Silver Dollar

1890 was the thirteenth year in which the so-called Morgan dollar was issued. The coin is named after George T. Morgan, the Mint’s Assistant Engraver, who designed both sides.

It was also thirteen years since the Bland-Allison Act had passed into law. The law was designed to regulate the supply of silver coins, and required the Treasury to purchase a set amount of silver every month. The volume was large: the monthly spend was set at between 2 and 4 million dollars.

1890 saw the Act repealed and replaced with a new law – the Sherman Silver Purchase Act. This changed the purchase requirements from value to weight. Each month, the Treasury had to purchase 4.5 million troy ounces of silver.

The Bland-Allison Act had required all the silver to be used for coins. But the Sherman Act required that it be used to make coins in only the first year of the new legislation, 1890.

The idea was that all these coins would stoke inflation, bringing relief to farmers who were getting low prices for their produce. The new legislation was also, unsurprisingly, supported by the mining sector, who would get bumper profits from the silver sales.

The result was a huge mintage of silver dollars in 1890. Over 38 million coins were struck, with 16.8 million produced by the facility in Philadelphia. New Orleans struck 10.7 million coins, and San Francisco 8.2 million. Even Carson City struck 2.3 million, making 1890 the highest Carson City mintage of any Morgan dollar.

Years later, the Pittman Act required millions of silver coins to be melted down. But many of the 1890 Morgan dollars that had been minted weren’t circulated at the time. And that meant that they escaped the mass smelting too.

Large quantities of the dollars struck at Carson City remained at the facility until it closed in 1899. They were then transferred to San Francisco and the Treasury building. Over the years, those coins were released into circulation, or sold to dealers.

Features of the 1890 Silver Dollar

The Obverse of the 1890 Silver Dollar

The obverse of the 1890 silver dollar has the image of Lady Liberty in profile. Only her head and neck are shown, unlike the previous “Standing Liberty” dollar.

In the curls at the base of her neck is a tiny “M”. It stands for “Morgan”, the George T. Morgan who designed the coin.

Stars, representing the states, circle the image. At the top is the Latin motto, “E pluribus unum”. It means “From the many one”, and refers to the formation of the United States of America. At the bottom of the coin is the date.

The large number of coins struck in 1890 meant that many dies had to be prepared. In Carson City alone, more than 15 dies are believed to have been created to strike the obverse of the 1890 dollar.

That has given rise to a number of different varieties, tiny differences that can in some cases be seen only with a loupe or microscope. Some collectors aim to find all these varieties, which are numbered with “VAM numbers” to distinguish them from each other.

The Reverse of the 1890 Silver Dollar 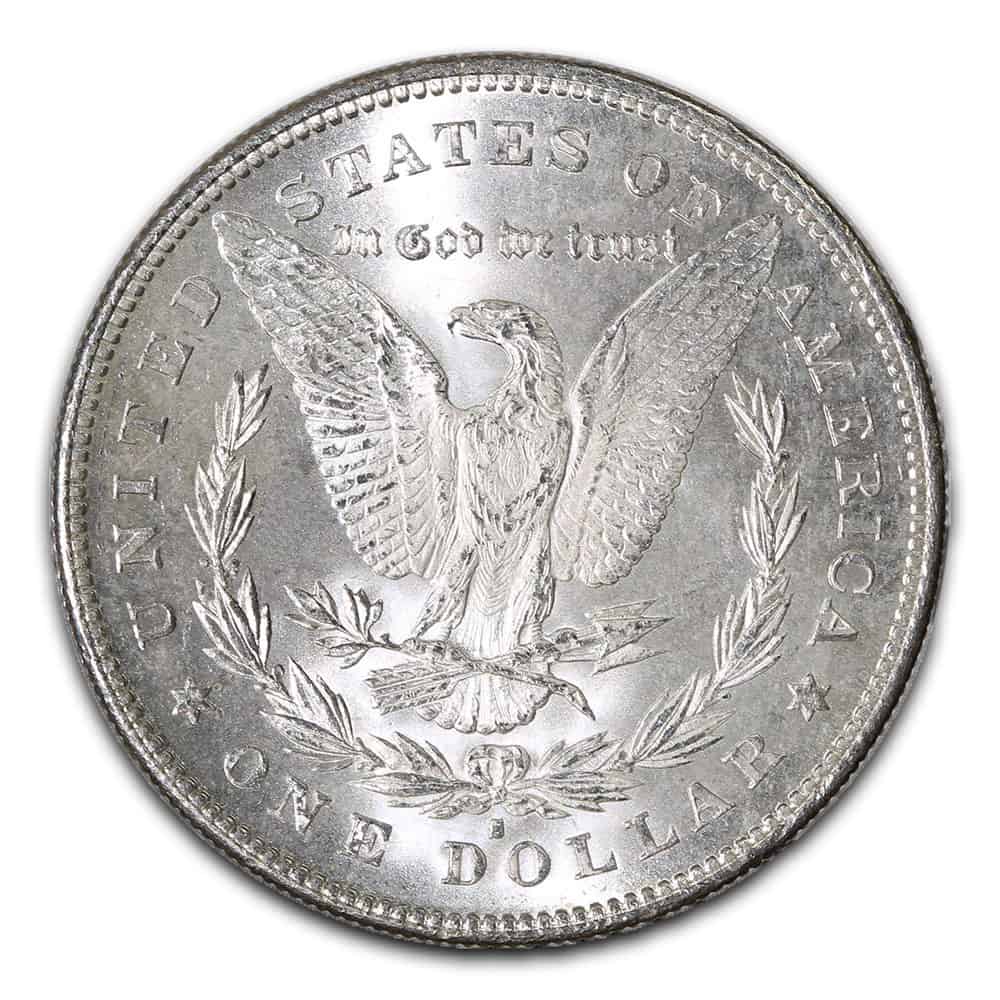 The reverse, or “tails” side, of the 1890 silver dollar shows a bald eagle, the symbol of the United States. The bird is depicted with head raised and wings outstretched, perched on a fletch of arrows. A laurel wreath curves around and below the image.

Both Morgan and the Mint’s Chief Engraver, William Barber, were instructed to produce designs for the reverse featuring an eagle. Barber’s image appeared more like a heraldic device, and it was Morgan’s naturalistic design that was selected for the coins.

The coins struck in New Orleans, San Francisco and Carson City also have a mint mark on the reverse. As the original mint facility, there was no need for any identifying marks for the Philadelphia mint.

And there are many varieties for the reverse of the 1890 dollar too. No fewer than 16 different reverse dies were produced for the coins in Carson City alone.

Other Features of the 1890 Silver Dollar

The 1890 silver dollar has what’s known as a “reeded edge”. Turn it on its side, and you’ll see a series of lines running around the metal, at right angles to the coin faces.

These were an early anti-fraud device, designed to prevent a practice known as “coin clipping – removing slivers of metal from gold or silver coins.

Many of the mint state coins minted in New Orleans were weakly struck. You may see ridges or signs of metal flow in the fields, particularly near the edges of the coin.

For more information on the features of the Morgan dollar, take a look at this YouTube video from ModernMiner. 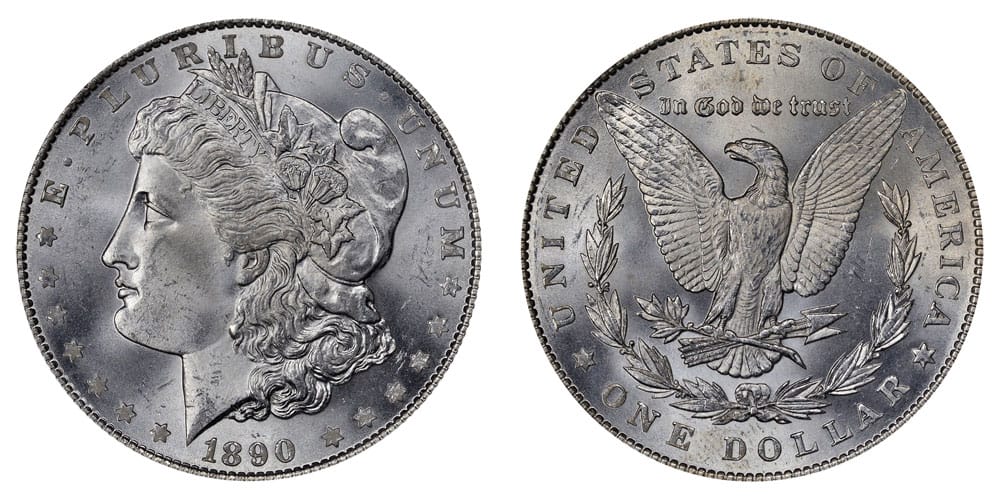 The large numbers of coins minted in 1890 in Philadelphia – almost 17 million of them – mean they’re still easy to find today. That’s particularly the case for circulated coins. You can get an attractive coin, one graded extremely fine (XF45), for about $50.

In mint state, they’re scarcer. But you can still find plenty of examples up to MS64, one point below “gem quality”. In fact, the PCGS has graded well over 5,000 coins at MS64. If you want one of them, expect to pay around $165.

At MS65, the population dips below 1,000, and prices rise to $1,100. The finest examples without the prooflike or deep mirror prooflike designation are graded MS66. The PCGS census has seven such coins, each one valued at around $15,000.

There are two prooflike coins at MS66 too. The premium here is significant – the coins are valued at $26,500 each. And for a deep mirror prooflike, the finest example is graded MS65+DMPL, and is valued at $22,500.

1890 saw a massive increase in the number of silver dollars struck at San Francisco. The previous two years had seen mintages of 657,000 and 700,000 respectively. That number jumped more than tenfold in 1890, with more than 8 million coins coming out of the facility.

The value of an uncirculated coin is the same as for a New Orleans or Philadelphia mint mark – about $50 at XF45.

It’s easy to get your hands on a circulated 1890 dollar minted at New Orleans. Over a million still exist, and it’s one of the most common of all the surviving Morgan dollars.

Numbers drop at MS64, and finding a sharply struck MS65 coin is challenging. Deep mirror prooflike coins at this level are particularly rare, accounting for about 3 per cent of the deep mirror prooflike population. Find an MS65DMPL, and it will be valued at around $12,000.

By the standards of Carson City, the 1890 dollar is relatively common in circulated grades. There are tens of thousands of survivors from among the coins that went straight into circulation.

Even so, Carson City coins have a special place in the hearts of collectors. And circulated coins still command a significant premium over examples from other mint facilities. A coin graded XF45 is worth around $325.

The 1890 Carson City dollars were generally well struck, and about 20 per cent of mint state examples are prooflike. The vast majority of those, though, are at lower grades. And only between 2 and 3 per cent of deep mirror prooflike coins are graded at MS65 or above. 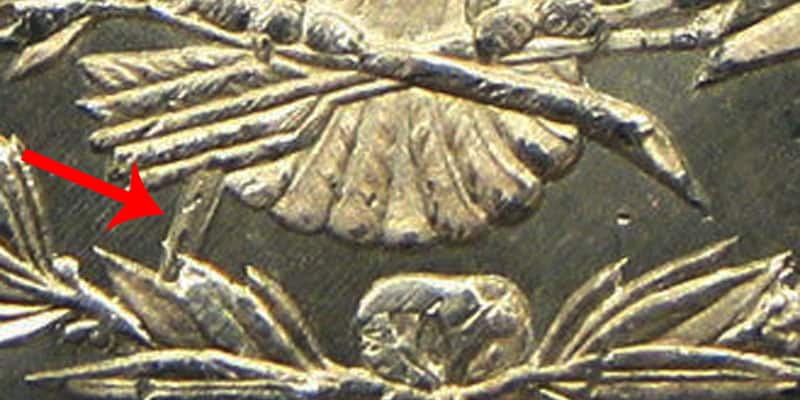 Some of the dollars minted in Carson City in 1890 are referred to as the “tail bar” variety. That’s because of a gouge on the reverse side, running down from the eagle’s tailfeathers to the tip of the laurel wreath.

Even at low grades, these are highly collectable coins. A coin graded 10 by the PCGS is valued at $225. The finest known examples are graded MS65+. The PCGS has graded two coins at this level, and they’re worth $45,000 apiece.

The large number of Morgan dollars struck in 1890 took its toll on some of the dies. Some coins show evidence of die breaks – cracks in the die.

One example from New Orleans had extra metal on its rim, caused by a die break. It was graded XF40 by the NGC and sold at auction for $90.

Off-center strikes are a relatively rare mint error, and examples can be very valuable.

This YouTube video from Couch Collectibles looks at both errors and fine quality 1890 Morgan dollars.

What makes an 1890 silver dollar rare?

Despite being over 100 years old, an 1890 silver dollar isn’t necessarily rare. In fact, there are more surviving coins from this year than almost any other Morgan dollar.

But fine quality uncirculated coins, especially at MS65 and above, are considerably rarer. And they’re rarer still if they’re also designated as prooflike or deep mirror proofline. Error coins, like coins that have been struck off-center, are uncommon too.

Where is the mint mark on an 1890 silver dollar?

The mint mark always appears on the reverse of the coin, the side with the eagle. Coins struck in Philadelphia don’t have a mint mark. But a coin struck in Carson City will have “CC”, in New Orleans “O” and in San Francisco “S”.

Look for the letters towards the bottom of the coin, above the “D” and the “O” of “DOLLAR”.