The silver dollar minted in 1889 is known as a “Morgan dollar”, part of a series first struck in 1878. So is the 1889 issue special? And if you get hold one of these coins, how much might it be worth?

That’s what we’re here to find out! We’re going to explore the 1889 silver dollar value, and we’ll look into its history and interesting varieties.

So if you’re ready to find out more, step this way.

History of the 1889 Silver Dollar

The 1889 silver dollar is one of a series popularly known as Morgan dollars. They get their name from the man who engraved their design, George T. Morgan.

The coins were made of 90 per cent silver and 10 per cent copper. Each one measured 1.5 inches in diameter and weighed a little under 27 grams.

Morgan dollars were first minted in 1878 and ran solidly until 1904. They were brought back in 1921, and a modern version was launched in 2021 and continues to be issued today.

They were the first silver dollars to be minted after legislation had been passed to control the issue of silver coins. Instead of being produced as and when needed, supply was limited to agreed totals.

The new laws required the Treasury to buy agreed quantities of silver each month and convert it to coins. The 1889 silver dollar was produced under the auspices of the Bland-Allison Act, passed in 1878. It committed the Treasury to spending between $2 million and $4 million on silver per month.

This meant producing a very large number of coins. To achieve this, the director of the Mint, Henry Linderman, wanted to use the mint facilities at San Francisco and Carson City, as well as the Philadelphia mint.

But as all the dies were produced in Philadelphia, and other mint facilities didn’t have the right equipment to prepare them for use. That meant that for the first month or so, all Morgan dollars were minted in Philadelphia only.

It was to be the final year of the steady mintage figures under the Bland-Allison Act. In 1890, the legislation was repealed and replaced by the Sherman Silver Purchase Act. It massively increased the amount of silver the Treasury was required to buy.

Morgan dollars continued to be produced in an unbroken run until 1904.

Features of the 1889 Silver Dollar

The Obverse of the 1889 Silver Dollar 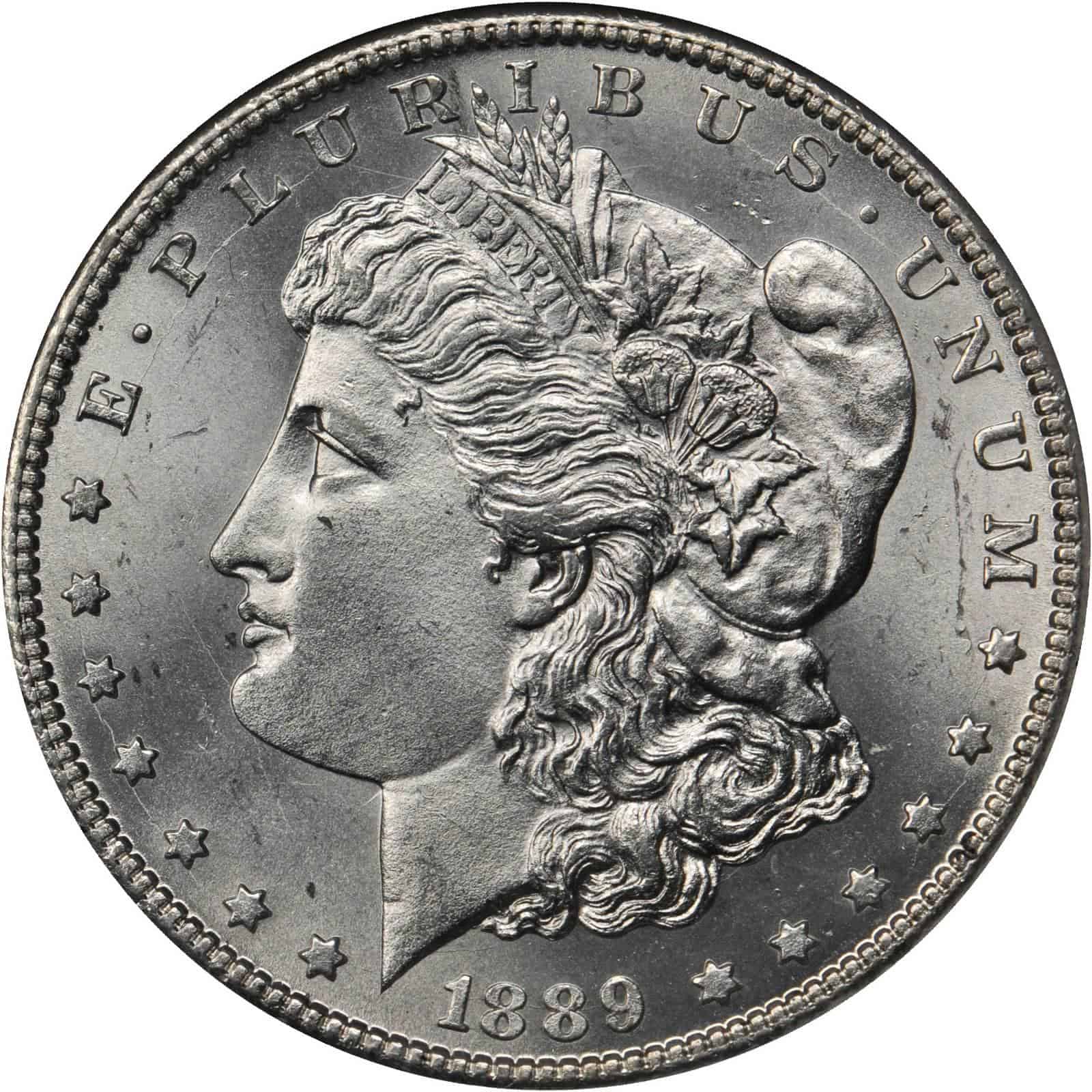 The designer of the 1889 dollar, George Morgan, had been brought to the US Mint from London in 1878. He took up the role of Assistant Engraver.

His design for the obverse of the coin depicts a bust of Lady Liberty. It provided some continuity with the Standing Liberty design of the previous dollar coin.

Morgan based his Liberty on the profile of a woman called Anna Willess Williams. The approach was a departure from previous images of Liberty, which had been depicted in classical Greek style.

Williams, in contrast, was American through and through. She was a teacher and a philosopher, and came from Philadelphia.

She had been suggested to Morgan as a possible subject by his friend, Thomas Eakins. The suggestion was well received: Morgan said hers was the most perfect profile he had ever seen. Five sittings later, the portrait was complete.

The image of Liberty that appears on the silver dollar is surrounded by stars. At the bottom of the coin, following the curve of the edge, is the date. At the top is the Latin motto, “E pluribus unum”. It means “From the many, one” and refers to the union of the states.

The Reverse of the 1889 Silver Dollar 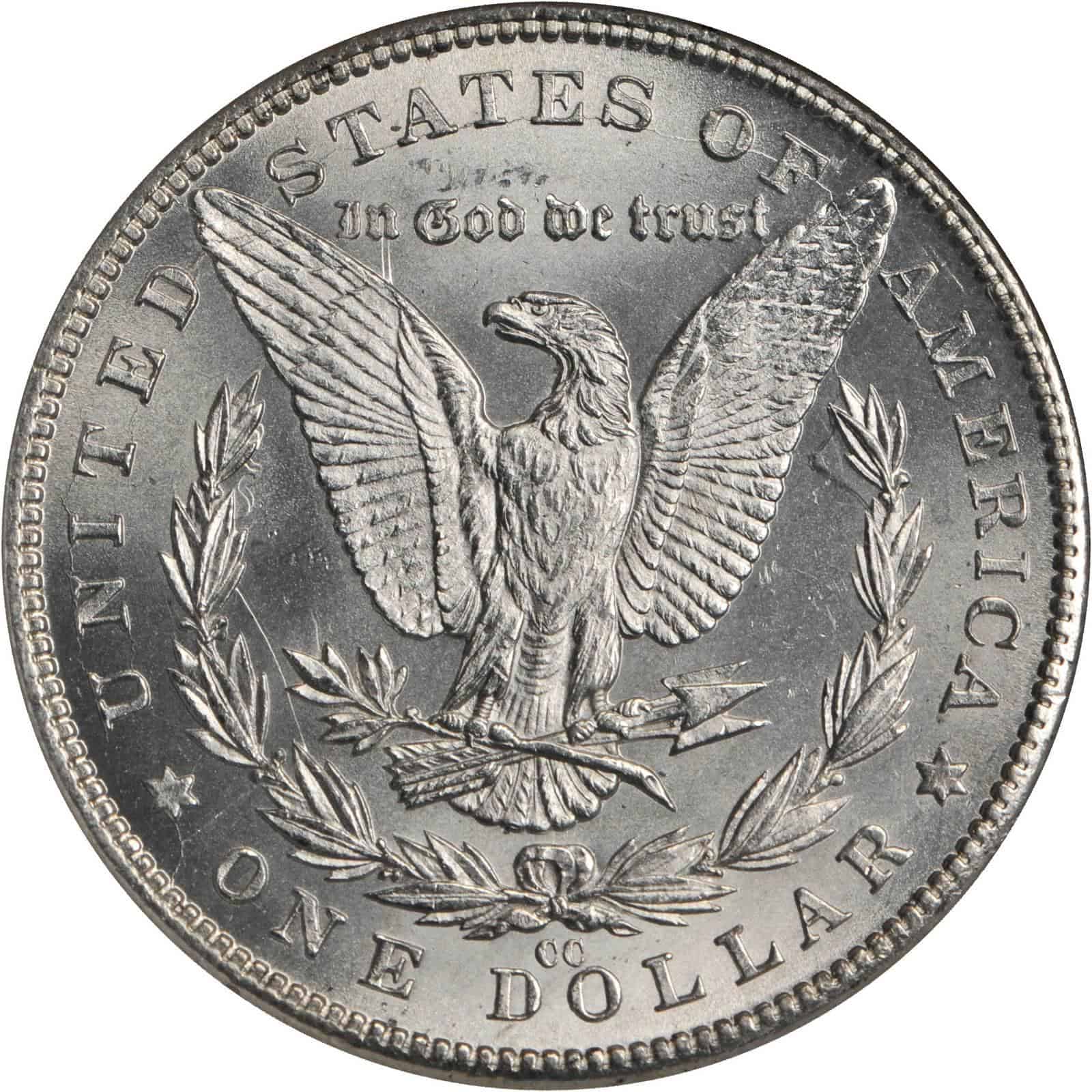 The reverse of the coin carries an image of the American symbol, the bald eagle. Morgan had enrolled at the Pennsylvania Academy of the Fine Arts to prepare his design. And whilst there, he had obtained a number of studies of the bird in the wild.

The eagle appears perched on a bunch of arrows, with both wings outstretched. The very first Morgan dollars had an eagle with eight tail feathers. But that was changed after just a couple of weeks.

The revised design had seven tail feathers. It had by then been noted that the eagles on all previous US coins had an odd number of tail feathers.

Other small changes were made too. These reduced the relief of the design – the amount it was raised above the coin surface – to prolong the life of the dies.

Around the outside edge are the words “United States of America” at the top, and “One dollar” at the bottom. The motto “In God we trust” is written in Gothic script above the eagle’s head.

Other Features of the 1889 Silver Dollar

There are a large number of different varieties of the 1889 silver dollar. They include the “bar wing” dollar, which has a blob of metal above one of the eagle’s wings. It’s the result of a piece of the die breaking off.

There are also three varieties of “doubled ears”, two of “pitted reverse” and the “clashed IN”.

You can take a closer look at some 1889 silver dollars in this YouTube video from Sam Shafer Numismatics. 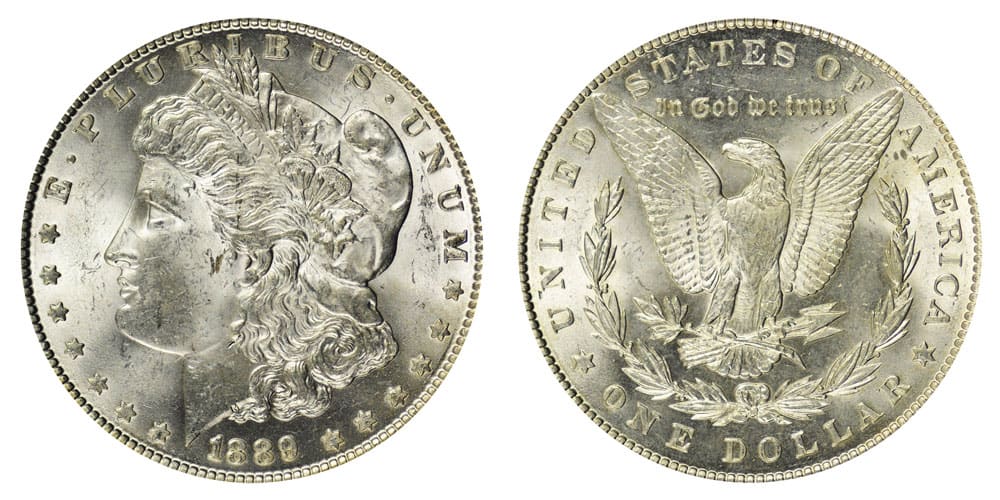 The silver dollars minted in Philadelphia can be identified by their lack of mint mark on the reverse. Over 22 million of them were made. And while many have since been melted down or otherwise lost, they are still relatively easy to find.

Generally speaking, the higher the quality and condition of the coin, the fewer specimens there are remaining. But even at higher grades, there are plenty of 1889 Philadelphia Morgan dollars to be found.

The silver content means that the coins will always have an intrinsic value. Even a circulated coin, graded “extremely fine” (point 45 in the PCGS scoring system) is worth around $50. But the plentiful supply means that even at MS63, the value rises to only about $130.

The 1889 San Francisco silver dollar was minted in considerably smaller numbers – just 700,000 coins. And that makes it much rarer and hence, more valuable.

Even a circulated coin graded “extremely fine” will be worth around $130. And in mint state, and with prooflike or deep mirror prooflike designations, prices are much higher. 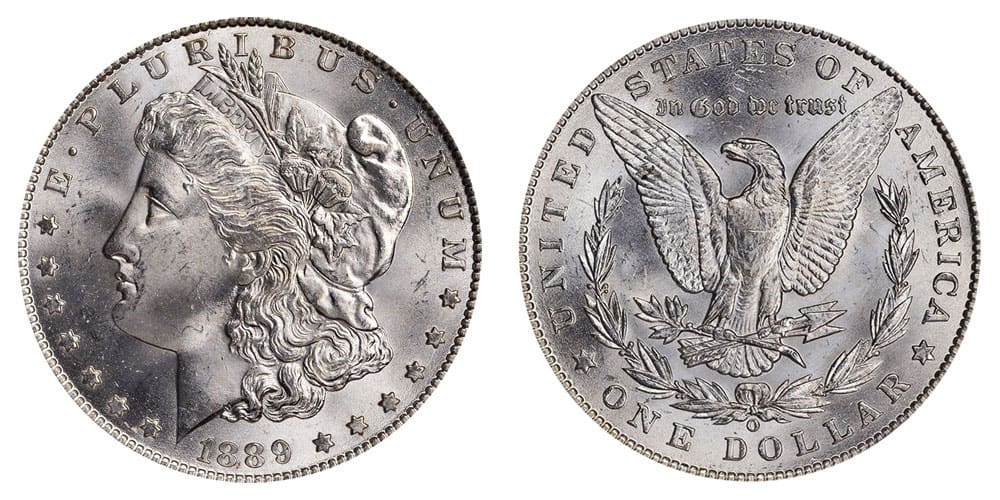 Silver dollars with an “O” on the reverse were minted in New Orleans. The mint facility there struck almost 12 million coins, making it second only to the mint in Philadelphia. That plentiful supply keeps prices relatively modest in circulated grades. But the highest quality coins are still valuable.

An extremely fine circulated 1889 O Morgan dollar is worth around $60. Mint state versions are worth more, and a prooflike or deep mirror prooflike designation will add to the value.

Numbers drop sharply at MS65+ (PCGS population of 33 without PL or DMPL designation). And only two MS66 examples are known to exist, with an estimated worth of around $52,500 today. 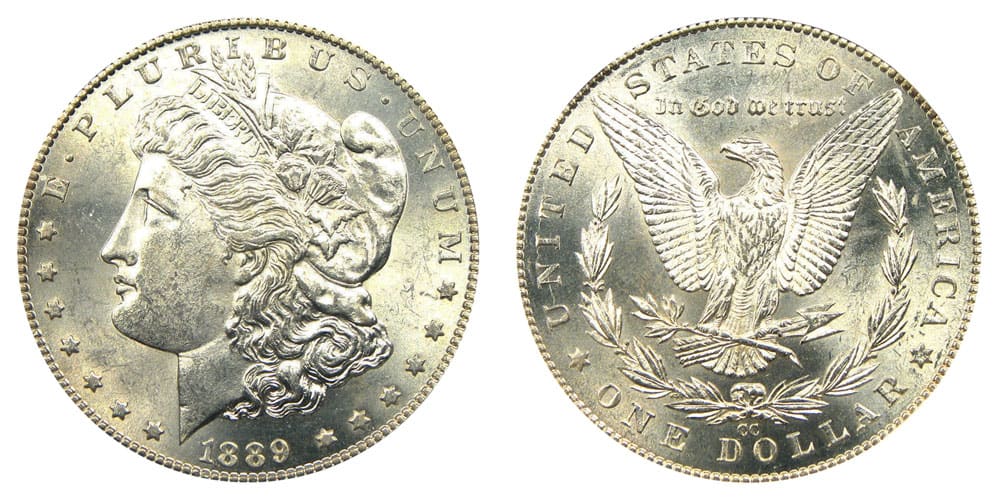 The Carson City silver dollar is the rarest mint mark of them all. Look for the “CC” above the denomination on the reverse.

Only 350,000 silver dollars were minted in Carson City in 1889. So finding survivors over 100 years later is a tall order. That goes double for coins that are in good condition.

Even circulated coins can fetch four figures. An extremely fine coin will be worth north of $5,000. As ever, coins designated “prooflike” or “deep mirror prooflike” are more valuable.

And the premium for a DMPL designation here is huge. At MS63, it adds well over $30,000 to the value over a prooflike example at the same grade.

The huge number of Morgan dollars were produced using a variety of different dies. And a number of those die pairings produced unique images. These are recognized by collectors using the VAM cataloging system. (VAM stands for Van Allen and Mallis, the numismatists who created the system.)

This means there’s a huge variety of coins on offer for keen collectors of Morgan dollars. A VAM coin doesn’t necessarily command a premium – but some do. The PCGS’s list of “Top 100 Morgan VAMs” separates out the VAMs that add to a coin’s price.

Four VAMs from 1889 are included in the list: the “Bar Wing” from Philadelphia, and the “Oval O”, “Clashed E” and “Doubled Date” from New Orleans.

A range of different errors are represented among the 1889 silver dollars.

Some error coins are much more valuable. An 1889 Morgan dollar graded MS62 and struck 10 per cent off-center sold at auction for more than $6,000.

This YouTube video from Couch Collectibles looks at a range of different 1889 silver dollar error coins and their values.

What makes an 1889 silver dollar rare?

The rarest 1889 silver dollars are those minted in Carson City. Even examples at lower grades can carry a big price tag. Look for the letters “CC” on the reverse of the coin, above the words “One dollar”. Also relatively rare are dollars from San Francisco, with an “S” on the reverse.

Which 1889 silver dollar is worth a lot of money?

Coins in excellent condition – graded MS66 and above – are valuable, no matter where they’re minted. And if they’ve been designated as “prooflike” or “deep mirror prooflike”, they’ll be worth even more.

Some varieties command a premium, like the “bar wing” dollar struck in Philadelphia. And some error coins are valuable too, because it’s unusual for the Mint to make mistakes.