Before we started making silver dollars, Americans mostly used Spanish 8-Reale pieces that were the equivalent of $1. And our earliest dollars were silver certificates, essentially paper money. But the 1886 $1 coin was a Morgan Dollar. In this article, we’re going to study this sparkling currency to look into its history and reliably verify the 1886 Silver Dollar Value.

History of the 1886 Silver Dollar

Historically speaking, the two most popular coins to collect are Lincoln Cents and Morgan Dollars. And Morgan Dollars resulted from the Bland-Allison Act and the Sherman Silver Purchase Act. They dictated the amount of silver that the mint had to buy from the public every month. The Mint would get the metal at market value and make silver dollars with it.

When this stash of silver ran out in 1904, they stopped making Morgan Dollars. The Morgan Dollar is named after George Thomas Morgan, the Assistant Mint Engraver who designed it. He was a skilled British engraver but at age 30, he couldn’t find work in the UK that matched his caliber. Luckily, US Mint Director Henry Linderman sought referrals from the UK Mint.

The Deputy Director of the Royal Mint in London – C.W. Fremantle – recommended Morgan and sent him over for a 6-month trial on 9th October 1876. He was to train under William Barber, the current Chief Engraver at the Philadelphia Mint. He enrolled at the Pennsylvania Academy of the Fine Arts and researched bald eagles. Now he needed a model for the coin.

Morgan wanted to use an American woman instead of creating an abstract silhouette sculpted in the traditional Greek style. His friend Thomas Eakin suggested Anna Willess Williams, the daughter of his friend Henry. Anna had sat for Eakins previously and seemed like a suitable candidate. She reluctantly posed for Morgan five times, and he was impressed.

When Anna was chosen to model Lady Liberty, she wanted to stay anonymous because she didn’t enjoy the spotlight. She asked Morgan to hide her identity, but someone snitched. He chose a Phrygian cap as Anna’s headgear. It’s a soft conical hat with a bent tip. Emancipated slaves wore it in Ancient Rome, so it represented Libertas, the Roman Goddess of Liberty.

But during the American and French Revolutions, it was co-opted as a symbol of freedom. And every depiction of Lady Liberty on American currency was understood to be a portrayal of this liberty goddess. Morgan’s Silver $1 was minted from 1878 to 1904, with fresh runs in 1921 and 2021 aimed at collectors. But most of the samples you’ll find today are 1921 pieces.

The 2021 edition of this coin is unique because it’s 99.9% silver while the earlier mint dates had only 90% silver with the rest made of copper. Morgan Dollars were made in five mints – Philadelphia (no mint mark), San Francisco (S Mint Mark), New Orleans (O Mint Mark), Denver (D Mint Mark), and Carson City (CC Mint Mark). Denver $1 first appeared in 1921.

And since the Carson City Mint remained closed from 1885 to 1888, the highest-ever price on a Morgan Dollar was the 1889 CC, which went for $881,000 in MS 68! It attracted a lot of attention and value because it was the first batch of $1 made after the mint re-opened. But the Carson City closure also means no 1886 Silver Dollars carry that coveted CC Mint Mark.

Features of the 1886 Silver Dollar

Morgan Silver Dollars were minted in high volumes, but most of them languished in the vaults of mints and post offices, where special storage rooms were prepped to prevent the coins from tarnishing. Let’s review the distinguishing features of this popular silver coin.

The Obverse of the 1886 Silver Dollar 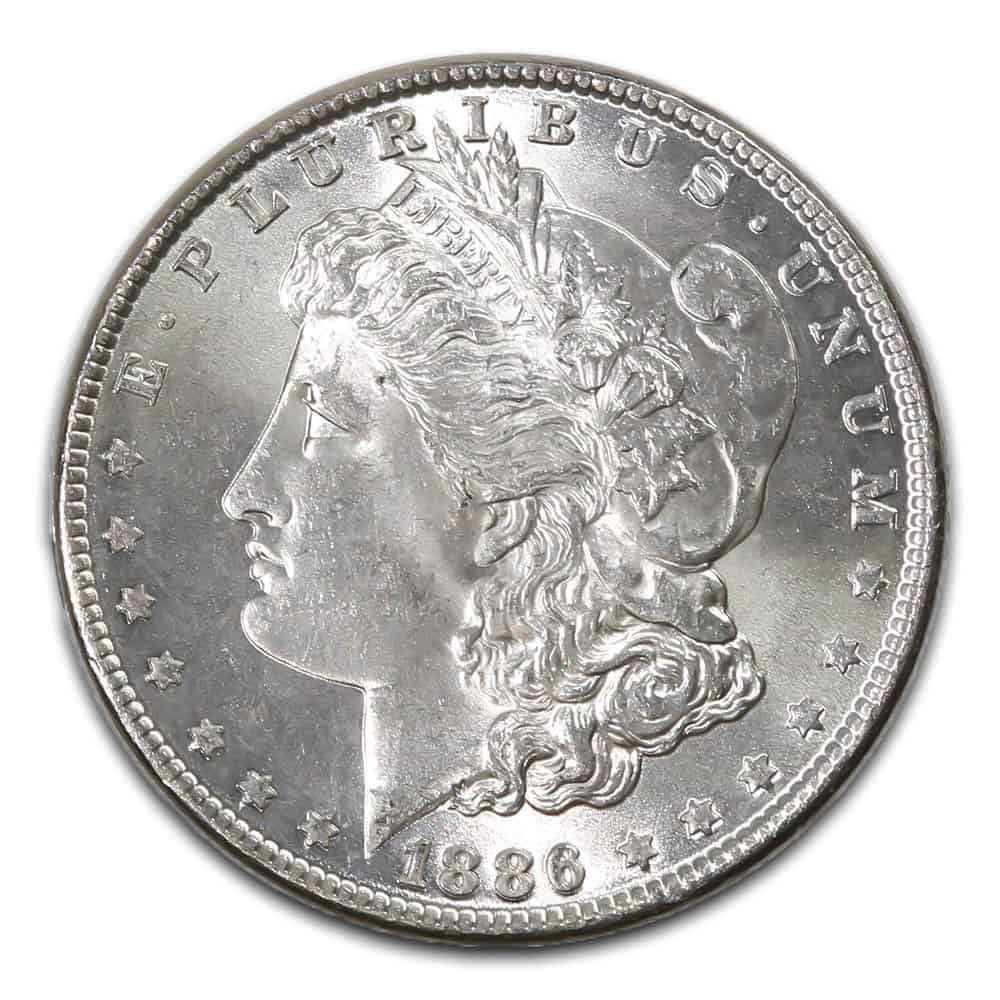 The obverse (heads side) of the 1886 Silver Dollar features a profile that represents Lady Liberty. The model for the portrait was Anna Weiss Williams, and she wears a Phrygian cap over her deeply detailed hair. The hat was known as a Liberty Cap, representing freedom during the Revolutionary War. It has a banner that reads Liberty, with leaves and flowers.

The top collar reads E Pluribus Unum with a dot on either side of Pluribus. The lower collar has the mint date. The coin features 13 stars to represent the first 13 States of the Union. 7 of these stars are on the left side of her neck and 6 stars are on the right, after the mint date. The designer’s initial (M) is at the cut-off point on her neckline, above her lowest lock of hair.

The Reverse of the 1886 Silver Dollar 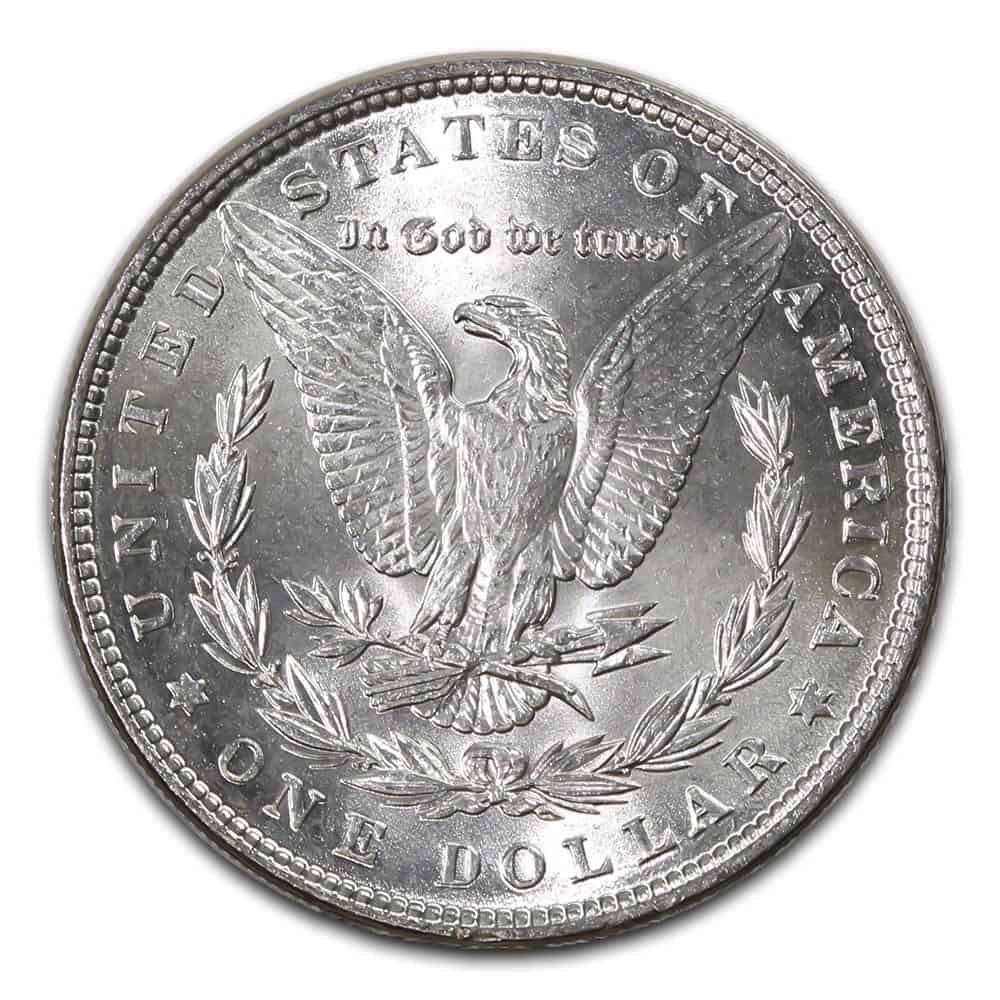 The reverse (tails side) of the 1886 Silver Dollar is pretty tightly packed. The device is an eagle with its wings spread above its head. Its talons hold an olive branch and three arrows, and its tail has seven feathers. A wreath with ten branches and a central bow surrounds the body of the bird, and the mint mark sits directly below the center of the wreath, above DO.

The denomination One Dollar runs along the lower collar while United States of America runs along the top collar. These legends are in all caps with two stars separating them. The words ‘states of’ are squashed between the eagle’s wings, and In God We Trust lies between them in sentence case, meaning it has an upper case ‘G’ in God with a lower case ‘w’ and ‘t’.

Other Features of the 1886 Silver Dollar

That’s (0.09”). It weighs 26.73g and has a reeded edge, plus denticles on both sides of the collar. Denticles are the ridges, teeth, dots, or ribs on the front and back of the collar. Since Morgan Dollars were so heavy, they rarely circulated. People preferred silver certificates.

As we’ve just mentioned, the Silver Dollar is a massive coin that proved too bulky for use in regular everyday transactions. Also, since so many of these coins were idling in vaults, and since the First World War created a desperate need for precious metals (plus military base metals like nickel), tons of these coins were melted by the mint to provide silver for the UK. 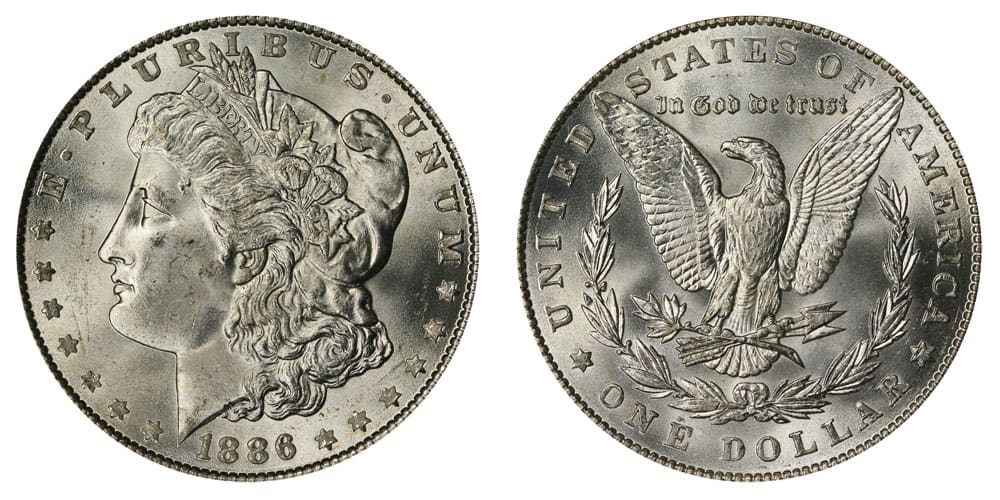 The Philadelphia Mint produced 19,963,886 Silver Dollars in 1886. These coins had no mint marks, and in the near-perfect grade of MS 68, a nicely toned sample can sell for $22,000. In lower grades, the coins are worth melt value. Curiously, $1 silver proof coins from 1886 were made at the Philadelphia Mint rather than the San Francisco Mint, so that’s a point of note. 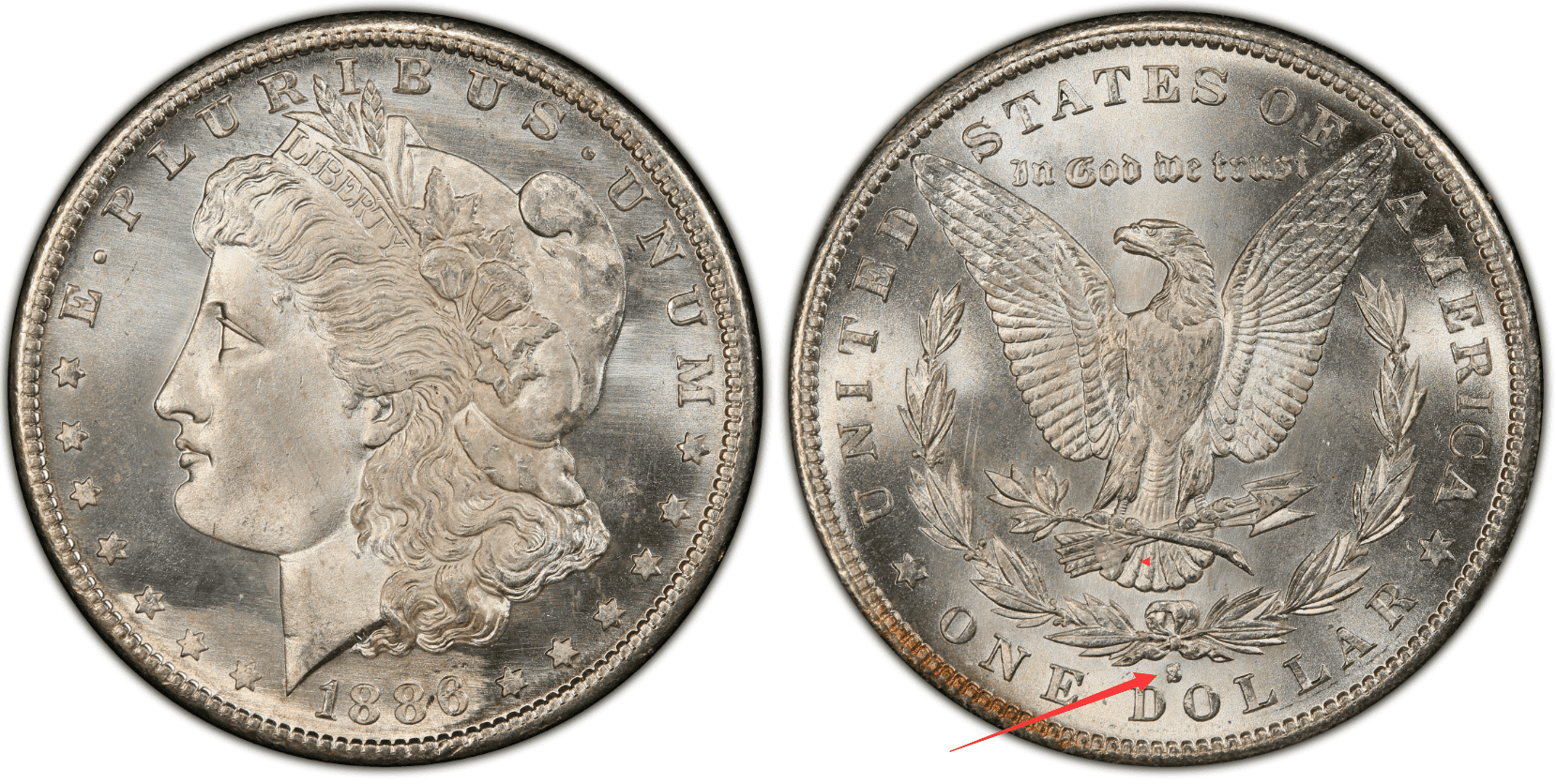 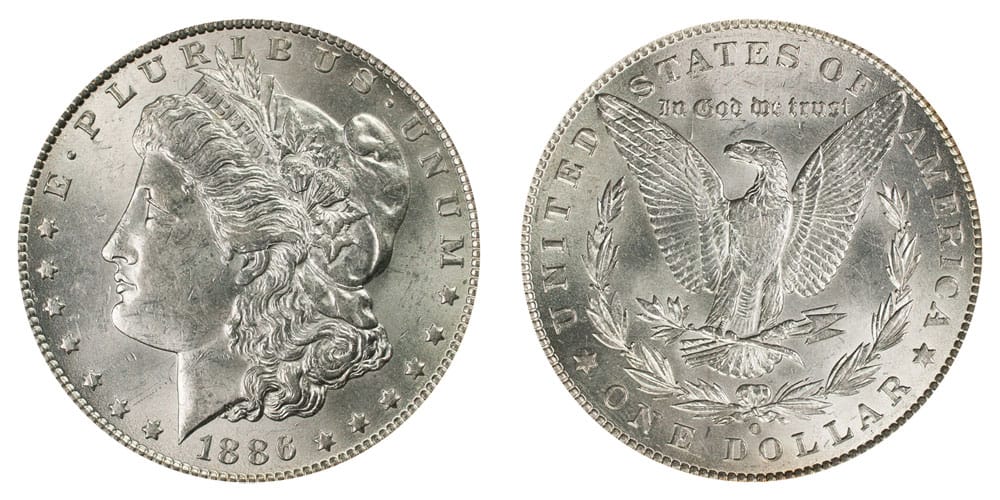 Proof coins are struck on pre-burnished planchets using specialty dies, so they’re an entirely different category from circulation coins. Usually, the device (image) is frosted while the field (background) has a mirrored finish. The shiniest coins – typically the first 50 to 100 pieces – are graded as Deep Cameo (D-CAM) or Ultra Cameo while less shiny ones are Cameo (CAM). 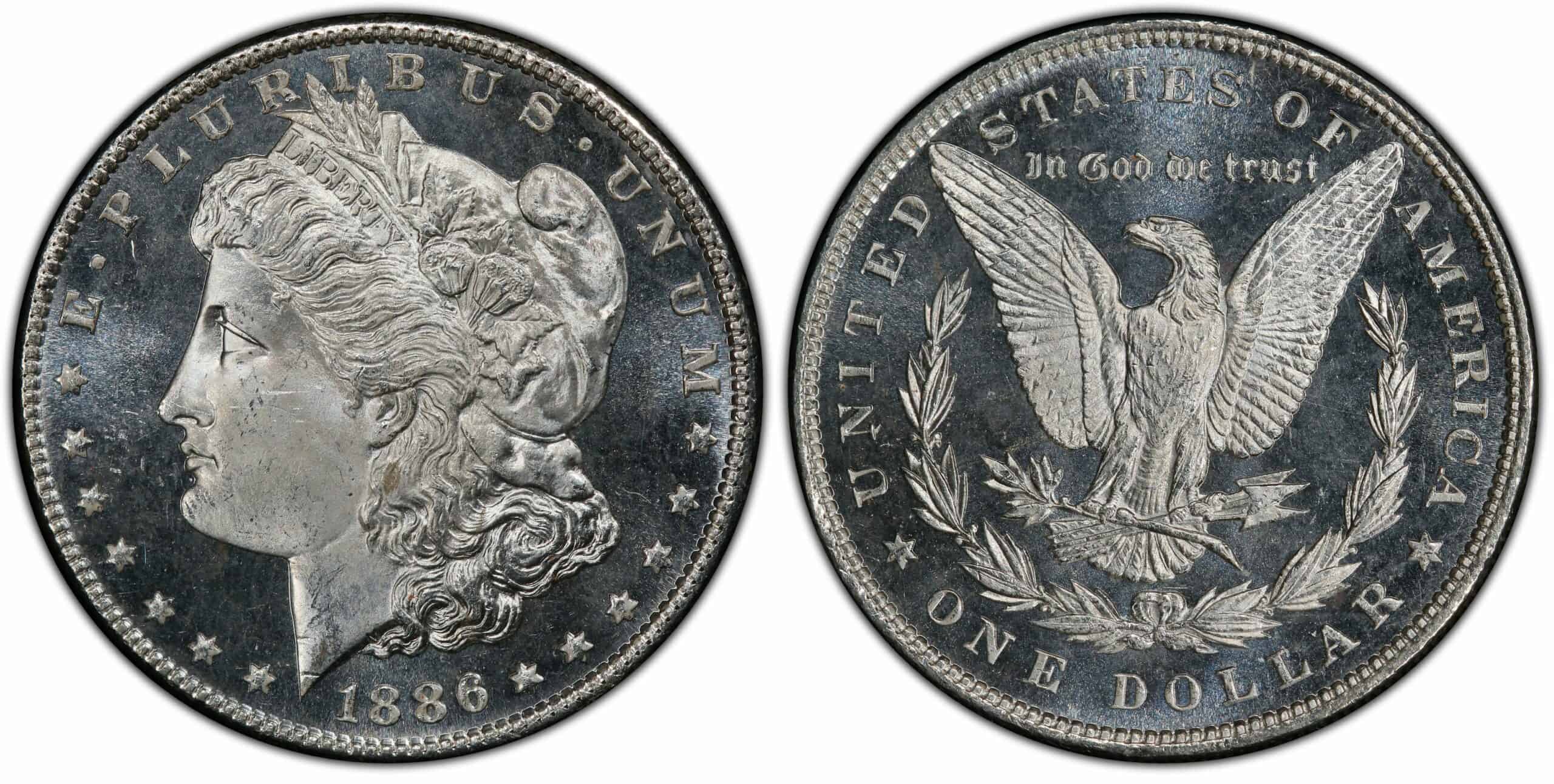 Sometimes, you’ll find a circulated coin with a mirrored finish because it was so well-preserved. But these coins aren’t bona fide proof coins since they didn’t use pre-burnished planchets or specialty dies. They’re graded PL (proof-like), DPL (deep-proof-like), or DMPL (deep-mirror-proof-like, pronounced ‘dimple’). They’re $140 in MS 63 and $850 in MS 65.

The face value of 1886 Silver Dollars is $1 while their melt value is $16. But if the coin has a valuable error, its resale price can jump into the thousands! Most of the errors on Silver $1 are listed as VAMs. VAM stands for Van Allen Mallis, representing the surnames of Leroy C. Van Allen and A. George Mallis. These coin researchers carefully studied silver dollar coins.

The goal was to spot every type, error, and variety of Silver $1 in existence. They listed each error with a distinct VAM number in their 1976 book, The Comprehensive Catalog and Encyclopedia of Morgan and Peace Dollars. Varieties are coin batches made from the same flawed die, so they all have the same mistake. Below are 1886 Silver Dollar errors worth cash.

DDR means double die reverse, and it happens if the planchet (that’s the blank disc) shifts between strikes, or if the die itself wasn’t well secured, so it moved around while minting. This can cause doubling when the strikes don’t land on the exact same part of the coin. You’ll probably need a coin microscope to spot doubling on the tail. In MS 65, the coin was $160. 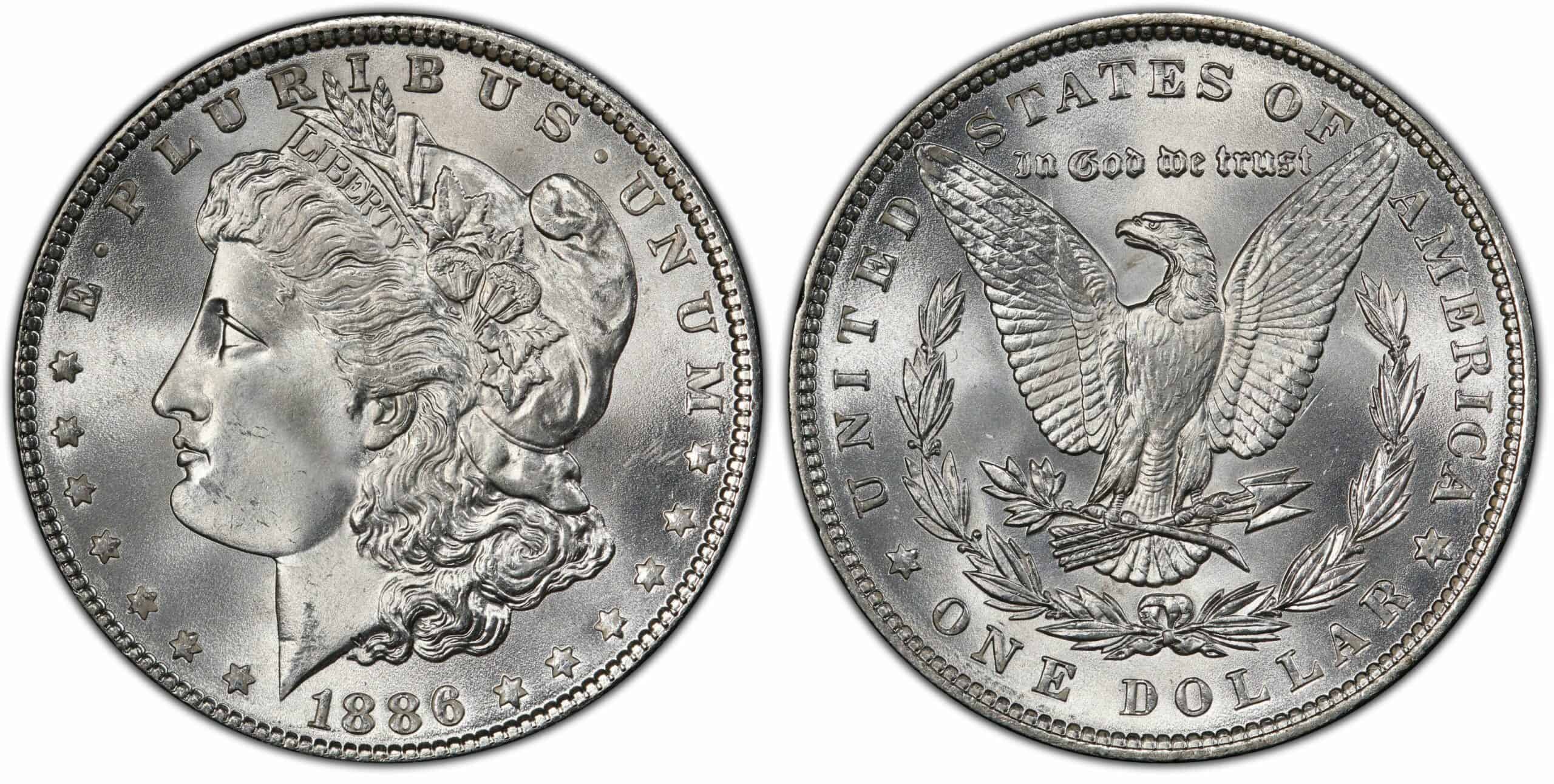 For the 1886 Silver Dollar, you’re more likely to spot a variety than an error, so we’ll have a lot of VAMs on this list. The Line-in-6 is known as VAM 1 A and displays a small horizontal crack inside the 6 on the mint date. It almost looks like doubling, but you only see it in the 6. In AU 55 (About Uncirculated), this coin is worth $70 but in MS 65, the coin sells for $250.

For this variety – designated VAM 1C – focus on the field of the coin by pointing your coin microscope between the right wing and the wreath. The flaw was caused by dies clashing during the minting process, and this collision created visibly marred spots on the reverse of the coin. This Silver Dollar could sell for $80 in AU 55, $135 in MS 63, and $260 in MS 65.

If the die shifts between hub strikes, it can cause a doubling effect that’s most easily spotted on the coin’s wording and numbering. But in this case, designated VAM 17, it’s the arrows that are doubled. The Morgan Dollar usually has three arrows at the back, clutched in the eagle’s talons. Here, you can see doubling on the middle arrow. It’s worth $240 in MS 65.

As we just said, coin doubling is easiest to identify on the numbers and letters of any coin, so it’s important to peruse the mintage date. On this VAM 20 Silver Dollar, the mint date shows distinct doubling inside the 6 on the mint date. It’s a pricy coin that starts at $400 in AU 55 and jumps ten times to $4,000 in MS 65. You can still net about $1,000 in mid-range MS 63. 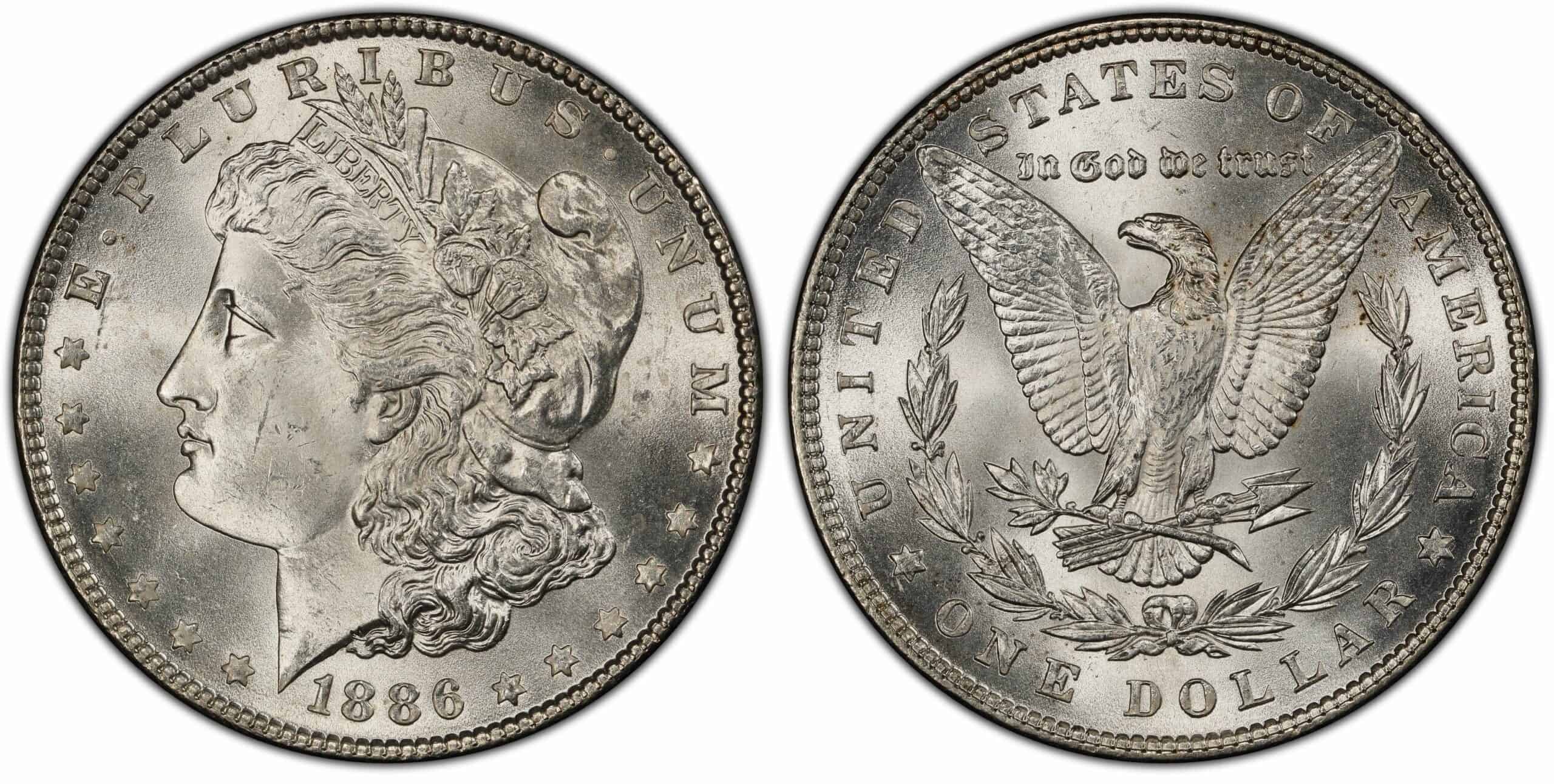 The M on the neckline is for Morgan, and you can’t always see it clearly because it’s tucked in Lady Liberty’s hai, with her last lock coiling around it. But on this VAM 21 coin, a closer look will show you that a line is slashing through the M at the coin’s neckline. In AU 55, this coin can go for $65. That price doubles to $140 in MS 63 then nearly triples to $350 in MS 65.

When coins are being made, the hub, die, and planchet all have to be struck multiple times to ensure clarity of coin detail. But if any of these parts shifts between strikes or is insecurely attached (#NoPsycho) then subsequent marking will land on a slightly different spot. This can lead to doubling, tripling, quadrupling, etc. This six-strike coin sold for $3,995 in MS 64.

Coins with collars can be made in two ways. One, a three-piece collar frames the coin so that the metal spreads into position when struck, then the collar sub-sections are removed. Or two, an incusion machine presses the reeds and any wording onto the edge. In Option One, a collar piece that detaches prematurely can cause a partial collar. These coins are worth $290.

FAQs About the 1886 Silver Dollar

What Makes a 1886 Silver Dollar Rare?

1886 isn’t an especially rare year for the Morgan Dollar. But about 270,232,722 silver dollars were melted in 1918 and sold to the UK at $1 per troy ounce to help in the war effort. These were mostly Morgan Dollars. Also, because people rarely used the dollars for daily trade, those silver dollars largely lived in bank and post office vaults, creating the illusion of rarity.

Where Do You Find the Mint Mark on the 1886 Silver Dollar?

The Mint Mark on the 1886 Silver Dollar is on the reverse (tails side). It’s punched towards the bottom of the coin, just above the denomination, directly above the D and O in Dollar.