1878 saw the launch of a series of coins that remain among the most keenly collected in the world. They are Morgan dollars, and their original run continued until 1904.

We’re going to take a look at one particular coin in the series: the 1884 silver dollar. Value, history and key features are all going to be put under the microscope. So whether you’re thinking of buying or selling, you’ll have all the information you need.

History of the 1884 Silver Dollar

1878 saw the launch of a new silver dollar. It became known as the Morgan dollar after George T. Morgan, the man who designed it.

That makes the 1884 dollar the seventh in the series. It came several years after the passage of the Bland-Allison Act. That was a law that committed the US Treasury to buying large quantities of silver – between 2 and 4 million dollars’ worth – every month to be made into coins.

The plentiful silver stocks meant that there were high mintages of the coins. 1884 saw over 28 million coins struck at all the mint facilities that were then active.

The largest proportion were struck in Philadelphia, which accounted for over 14 million coins. New Orleans struck just under 10 million, and San Francisco over 3 million.  The smallest contribution came from Carson City, where just over a million coins came off the presses.

Each one weighed just under 27 grams and measured 1.5 inches in diameter. They were made from 90 per cent silver, with a small amount of copper to make them more durable.

Morgan dollars continued to be minted every year until 1904. They were brought back for a single year in 1921. By then, a new mint facility had been established in Denver. The 1921 silver dollars are the only original Morgan dollars to include coins with a Denver mint mark.

A modern version of the coin was struck in 2021, 100 years after the last Morgan dollar. The legislation authorizing the new coins stated that they should be the same composition and weight as the originals.

The new coins were priced at $85 each, and sold out within just 45 minutes. Their popularity was such that it was decided to continue to mint them the following year. But in the event, supply chain issues and the rising price of silver combined to put the plans on hold.

Features of the 1884 Silver Dollar

The Obverse of the 1884 Silver Dollar 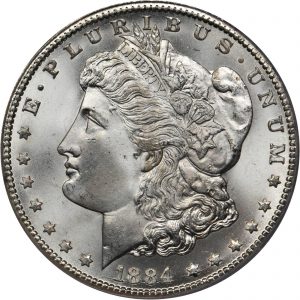 The 1884 silver dollar was crafted in an era when it was not considered acceptable to have images of real people on American coins. In keeping with this, the obverse carries the image of Lady Liberty. But the designer, George Morgan, based her image on the face of a real person.

The woman in question was Anna Willess Williams, a teacher from Philadelphia. She had already modeled for one of Morgan’s friends, an artist called Thomas Eakins, who was a friend of her father. When Morgan told Eakins he wanted an American face for his Liberty, Eakins suggested Anna.

She was initially reluctant to have her image on millions of coins. But she eventually agreed on the condition that she remained anonymous. Morgan, meanwhile, was delighted, declaring her profile “perfect” for the project.

But Anna’s hoped-for anonymity didn’t last long. Her name was revealed by a Philadelphia newspaper, and she quickly became known as the “silver dollar girl”.

Invitations for public appearances flooded in, but she preferred to keep a low profile. Some accounts even have it that the publicity cost her her job and a broken engagement. Whatever the truth of the matter, Anna didn’t address it, referring to it only as “an incident of my youth”.

The image of Liberty on the coin shows her in profile, facing left. Only her head and neck are shown. The portrait is surrounded by stars, with the date at the bottom and the Latin motto, “E pluribus unum” at the top.

The Reverse of the 1884 Silver Dollar 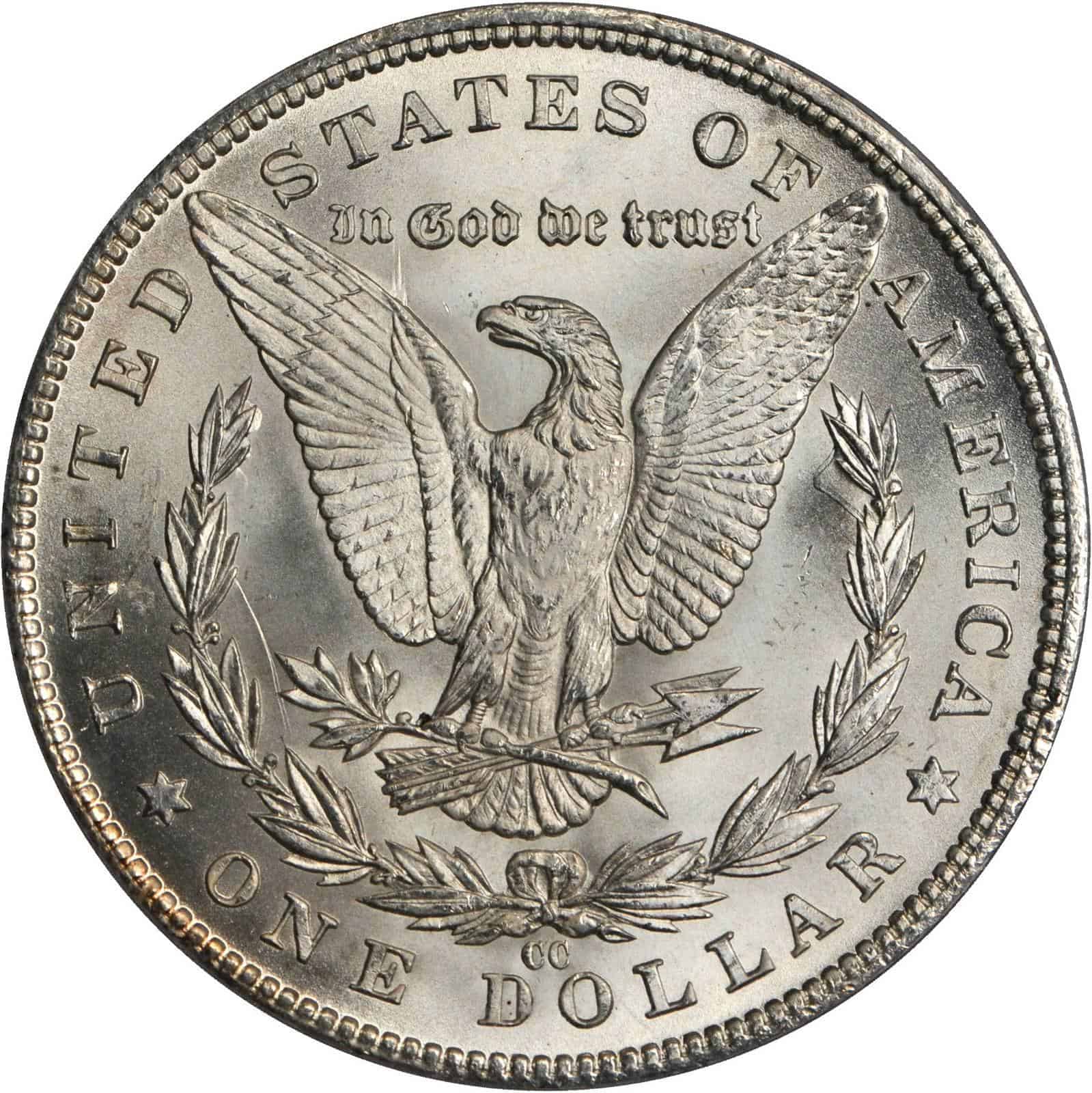 On the reverse appears a bald eagle, a traditional symbol of the USA. It too was designed by George Morgan.

Morgan had arrived in the USA from England, having been recommended for the role of Assistant Engraver by the director of the London Mint. He enrolled in the Philadelphia Academy of the Fine Arts to learn more about the American approach to design.

It was there that he studied various images of the bald eagle in nature. And it was these that he used to produce his design, showing an eagle with head raised, beak slightly parted, and wings outstretched. The eagle perches on a bundle of arrows.

It was one of two designs for the reverse to be submitted to the Mint Director, Henry Linderman. The Chief Engraver, William Barber, had also been asked to produce a design with an eagle. Barber’s design was more static, and it was the naturalistic eagle of Morgan that was chosen for the coins.

The name of the country appears at the top of the coin, following the curve of its edge. Below it, above the eagle’s head, are the words “In God we trust”. And the denomination of one dollar is at the bottom.

Other Features of the 1884 Silver Dollar

As with Morgan dollars from other years, the 1884 silver dollar offers a number of different coin types.

Some coins have what’s called a “prooflike” appearance, while others have a “deep mirror prooflike” designation. The many varieties include the Cleveland Wreath, Cleveland Blue Eagle and Doubled Ear.

This YouTube video from Silver Dragons takes you through the features and value of the Morgan dollar. 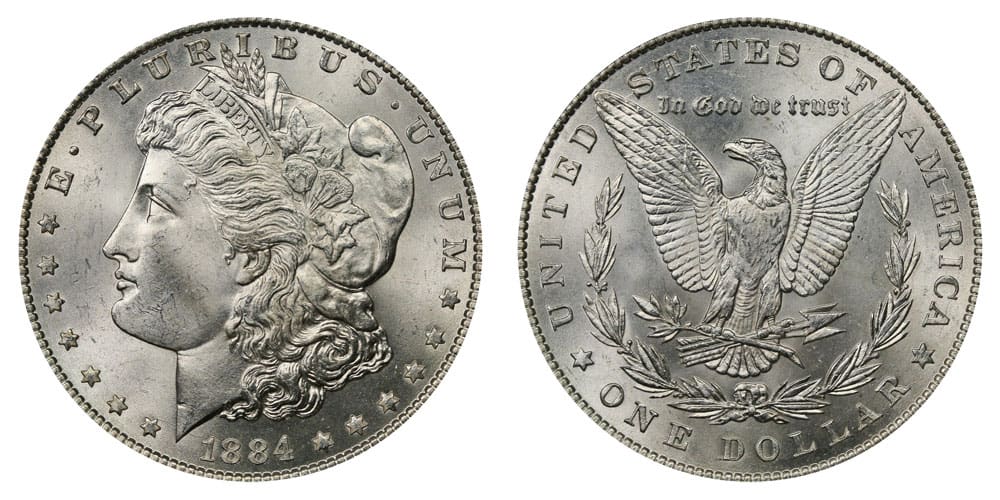 Many silver coins minted in the 19th century have since been melted down. But the high numbers of Morgan dollars struck at Philadelphia mean they’re still pretty easy to find today. And that includes the 1884 coins. Circulated coins in extremely fine (XF45) condition will sell for around $50.

The better the quality and condition of a specific coin, the more valuable it will be. But even at “gem quality” grades – mint state 65 and above – 1884 Morgan dollars aren’t rare. Independent coin graders the PCGS has assessed over 2,700 coins at MS65. They’re valued at about $375 apiece. 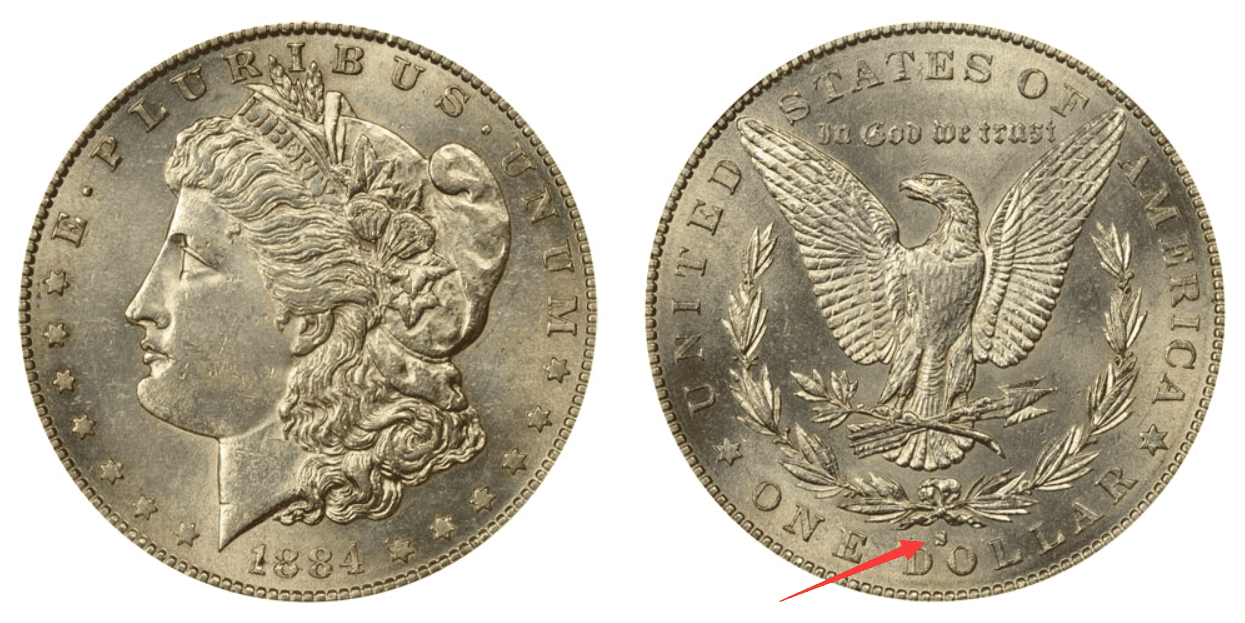 The number of silver dollars minted in San Francisco in 1884 was much lower than either Philadelphia or New Orleans. And finding examples at higher grades is a far greater challenge.

A circulated 1884 S silver dollar graded extremely fine (XF45) is worth more than three times as much as equivalents from Philly or New Orleans. And prices rise steeply.

You’ll have to pay at least five figures for any coin graded MS60 and above. The PCGS has graded only 51 coins at MS63, and they’re worth around $52,500 each. 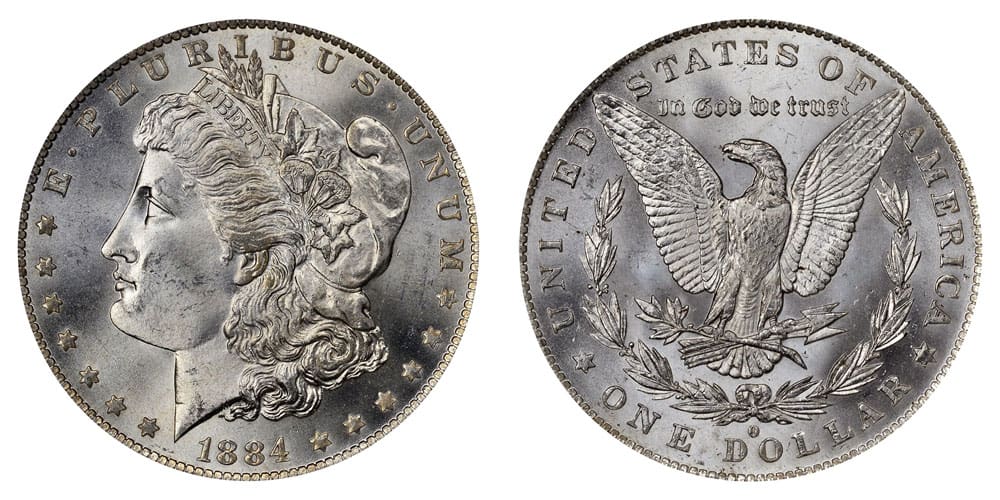 Find an “O” on the reverse of your silver dollar, and it will have been minted in New Orleans. Prices for these coins in circulated grades are about the same as for Philadelphia examples. An extremely fine, XF45, 1884 O silver dollar is worth around $50.

But while fewer coins were struck here than in Philadelphia, there are more survivors at higher grades. That suppresses prices, with even an MS65 coin worth only about $265.

There are plenty of prooflike and deep mirror prooflike coins too. An MS63DMPL is worth around $280, while an MS65PL is $450.

It’s not until MS67+ that the number of graded coins reduces to double figures. A coin at this grade is today valued at just north of $6,000, while a prooflike example will be more than twice as much. 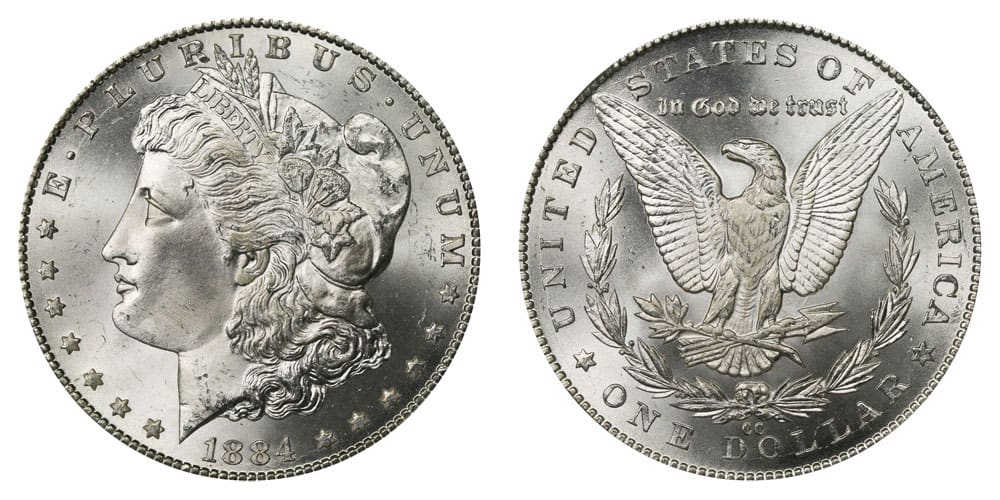 There is a dedicated fan base for the Carson City Morgan dollar. Minted in smaller numbers than those from the other facilities, these can be identified by the mint mark of “CC” on the reverse.

An extremely fine circulated coin is valued at about $225. But there are more survivors than you might expect at higher grades. And there’s plenty of choice amongst mirror and deep mirror prooflike coins too.

That’s largely because of the hoard of uncirculated silver dollars sold by the Treasury in the 1960s. These are known as the “GSA Hoard” after General Services Administration, the agency that organised the sale.

Collectors of particular coin varieties will find plenty of choice among 1884 Morgan dollars.

The varieties are given VAM numbers, named after Van Allen and Mallis, the numismatists who created the system to catalog them. There are no fewer than 13 VAM varieties minted in Philadelphia alone. These are numbered 1 to 12, with VAM 2A bringing the total to 13.

Others VAM varieties were struck in New Orleans and San Francisco. And there are interesting varieties specific to individual mints – like the Cleveland Wreath and Cleveland Blue Eagle from Carson City.

Most VAM varieties don’t add anything to coin value. But the Morgan Top 100 lists the varieties that command a price premium.

These include the VAM-3 large dot and VAM-4 dot, both struck in Philadelphia. They have a dot near the “M” of Morgan’s initial, at the bottom of Liberty’s neck. You’ll need a coin loupe, or even a microscope, to spot it.

This YouTube video from Coins for Amateurs takes you through the VAM-3 and VAM-4 dot varieties. A VAM-3 graded AU55 sold recently on eBay for $36, while one graded MS64 sold for $92.

1884 silver dollars were also produced with a range of errors.

These include a clashed die variety. Look closely, and you’ll see the “E” of “LIBERTY” clashed through to the reverse. It appears just below the eagle’s tail feathers.

You can also find 1884 silver dollars that have been struck off-center. One example, struck off by about 15 per cent and graded MS64, sold at auction for over $19,000.

This YouTube video from Couch Collectibles looks at a number of different 1884 Morgan dollars with mint errors.

It’s not difficult to find circulated 1884 silver dollars. Amongst lower graded coins, those minted in San Francisco and Carson City are rarer than those from Philadelphia or New Orleans.

But coins graded at the highest levels are much scarcer. And some error coins, like 1884 silver dollars struck off-center, are rare and can be valuable.

Where is the mint mark on an 1884 silver dollar?

Not all 1884 silver dollars have a mint mark. If your coin has one, it will be on the reverse, just above the “D” and “O” of “DOLLAR”. Coins without a mint mark will have been struck in Philadelphia. A “CC” indicates Carson City, “O” is for New Orleans, and “S” is for San Francisco.