The 1882 silver dollar value depends on each particular coin’s condition, but you can expect that even the worst preserved piece is valuable. The reason is 90% of the silver that it contains and a low number of surviving coins.

As expected, collectors particularly look for high-grade pieces, but their number is limited after years of use and almost 150 years of existence. One of the most challenging things is to estimate their price because of numerous factors affecting it. Let’s take a look.

History of the 1882 Morgan Silver Dollar

The first American silver dollars appeared in 1794, but most collectors believe the Morgans were the best of all silver dollar designs ever minted in the US Mint. Their mintage lasted from 1878 to 1921, making them in circulation longer than other similar coins.

Interestingly, there was no need for the American economy to get a new silver dollar at the end of the 19th century. Most Americans hated the Liberty Seated dollar, but silver-mining interests needed silver coins in circulation. So, the decision to create a piece with the new design resulted from political pressure.

After forceful lobbying, Congress passed the Bland-Allison Act in 1878, requiring the Treasury to purchase 2 to 4 million troy ounces of silver bullion monthly. The goal was to collect enough silver to mint new silver dollars.

George T. Morgan was a talented US Mint assistant engraver engaged in creating the new silver coin design. School teacher Anna W. Williams was his inspiration, and he made the coin after her face.

Critics named the new coin a Buzzard Dollar because of a scrawny eagle on the reverse. Plus, some experts insisted on seven instead of eight tail feathers depicted in the original design, resulting in three variations minted in the first minting year.

Most Americans consider the Morgan silver dollar unique, elegant, and likable. Plus, it is an excellent investment because of constant demand and stable value.

Features of the 1882 Morgan Silver Dollar

These silver coins are almost 150 years old. They are valuable regardless of their condition, but some highly-preserved pieces can be worth a fortune.

The obverse of the 1882 Morgan silver dollar 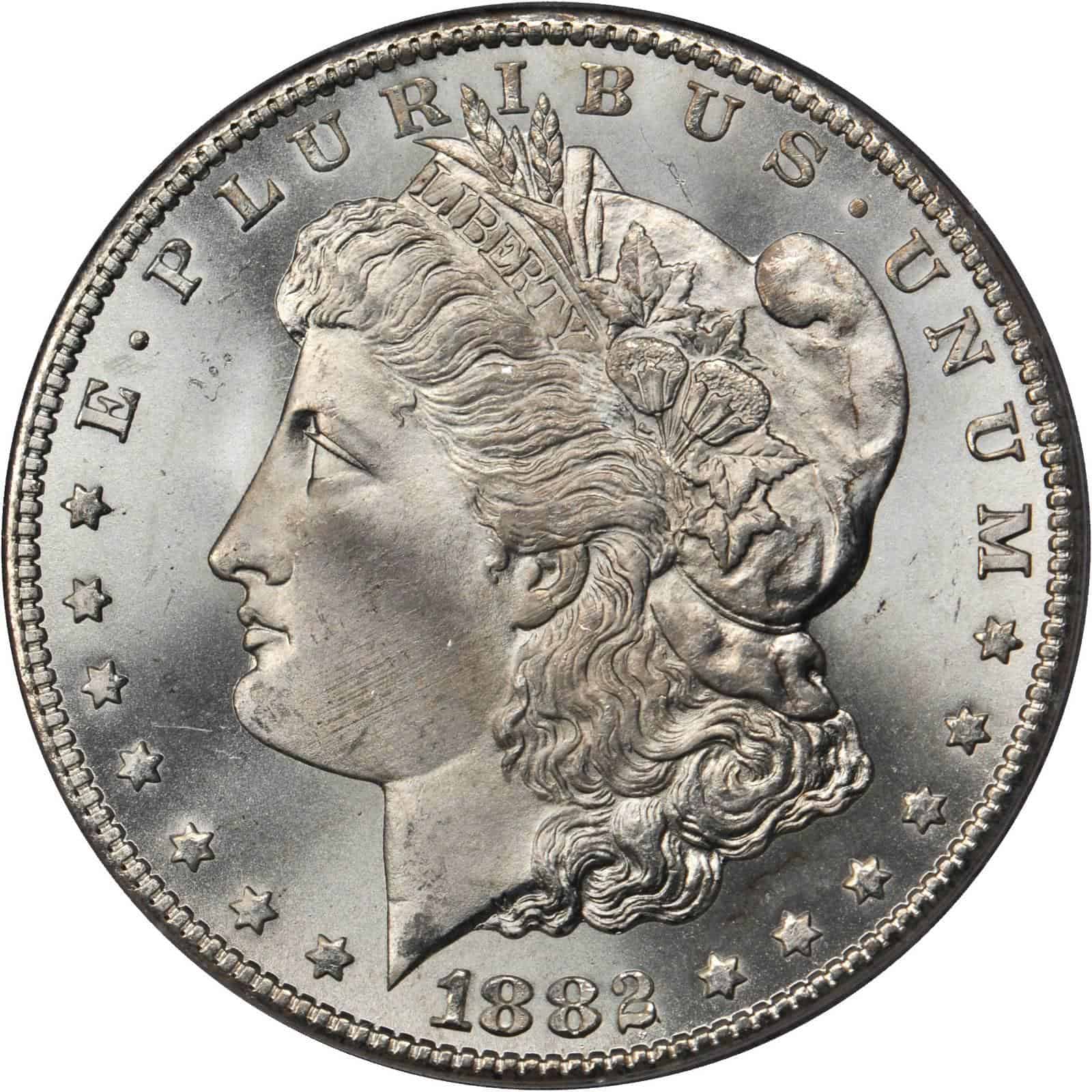 The beautiful Lady Liberty with the word LIBERTY on the ribbon is centrally positioned on the 1882 Morgan silver dollar obverse. The Latin motto, E PLURIBUS UNUM, is above her head, while you can notice the DATE along the bottom rim.

The reverse of the 1882 Morgan silver dollar 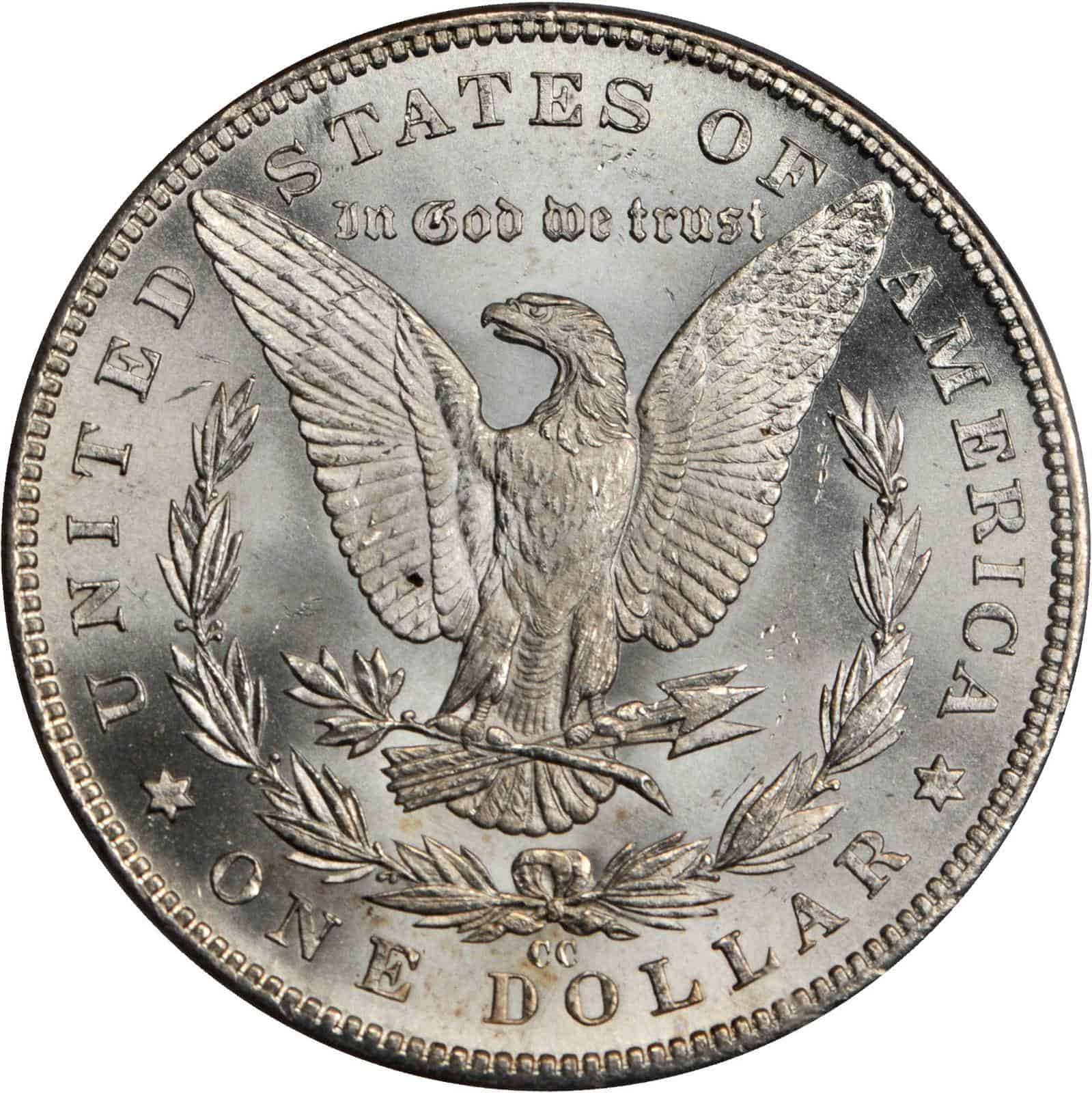 The rich reverse design includes a centrally positioned bald eagle with the motto IN GOD WE TRUST between its head and the UNITED STATES OF AMERICA. A laurel wreath and the denomination ONE DOLLAR are below the eagle’s talons, tightly clutching an olive branch and arrows.

Other features of the 1882 Morgan silver dollar 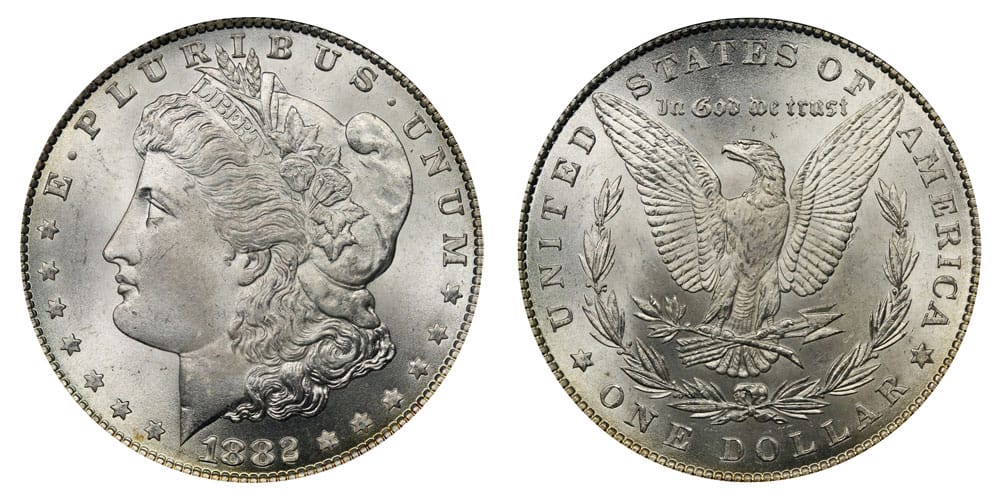 Typically, the Philadelphia mint had the highest Morgan silver dollars mintage, which was also the case this year. It produced 11,100,000 coins in 1882, but most pieces disappeared over time. 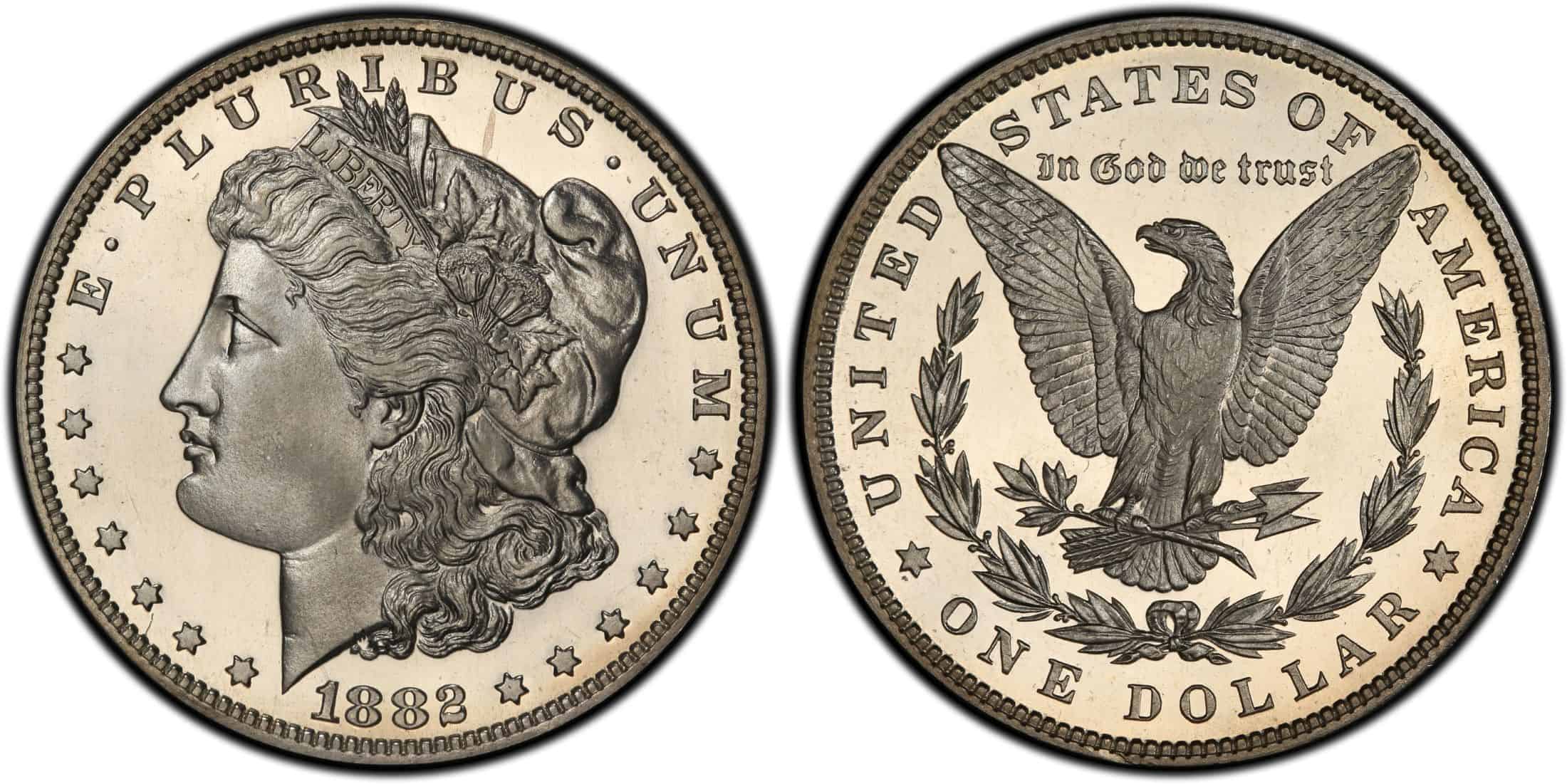 Besides regularly struck Morgans, the Philadelphia mint produced 1,100 proof coins in 1882, and their price currently depends on the preservation level. 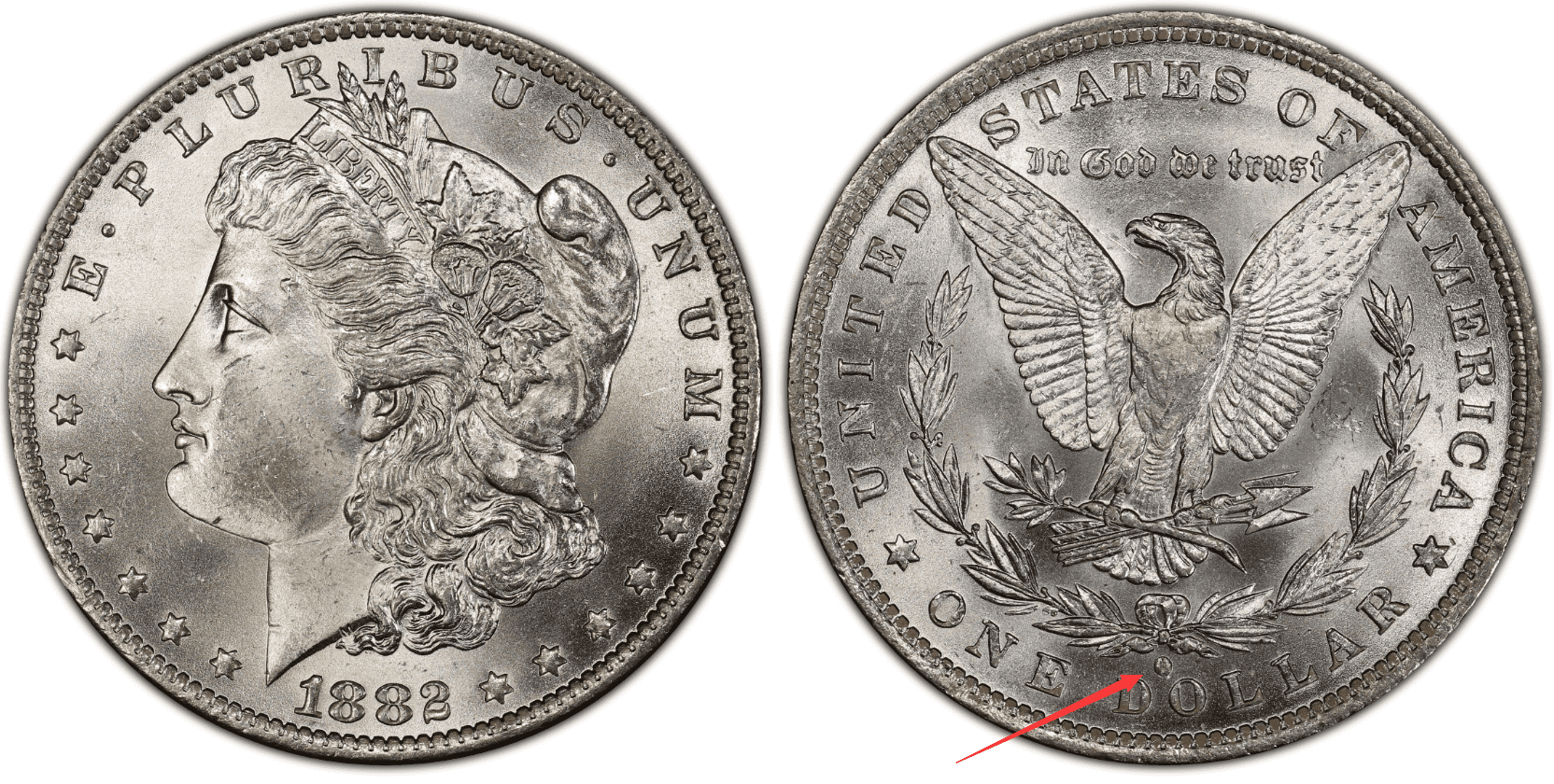 In 1882, the New Orleans mint produced 6,090,000 Morgan silver dollars, which are now worth approximately $30 to $60 in circulated condition. On the other hand, the difference between pieces in MS 60 and MS 68 grades is huge.

Slight quality deviations significantly affect coins’ value since their price range is $55 to $65,000 on the current coin market. The situation is even more complicated with PL and DMPL coins. While standard pieces in an MS 65 grade are worth about $200, beautiful proof-like rarities of the same rating can reach a few thousand dollars. 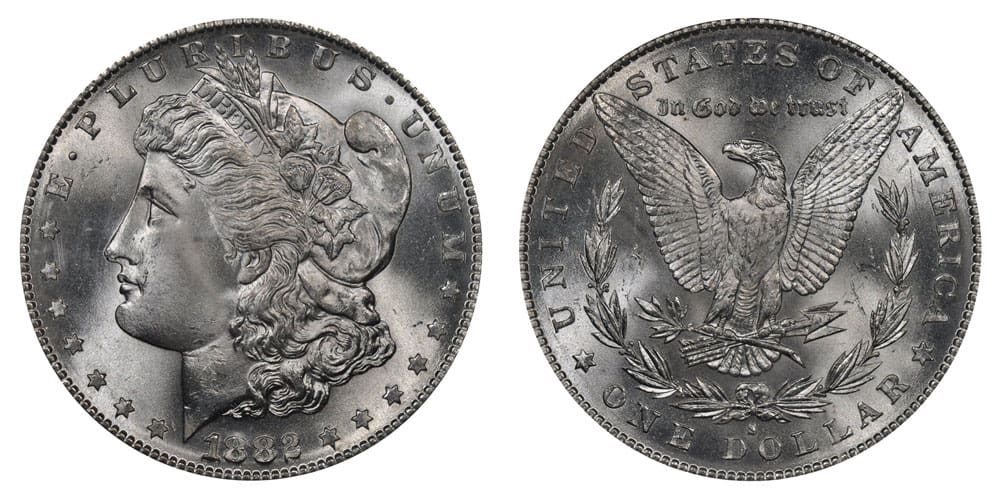 The San Francisco mint produced 9,250,000 Morgan silver dollars with the S mint mark in 1882. Thanks to the silver content, even pieces in the lowest grade are collectible and are worth $30. Those in the mint state are pricey, and the most preserved ones can reach $6,500.

The most appreciated are deep mirror proof-like coins. The highest-graded pieces are with an MS 66 rating, and their price is estimated at $9,000. The 1882 S MS 68+ Morgan silver dollar sold at an auction is the most expensive since one collector paid $27,025 for it in 2019. 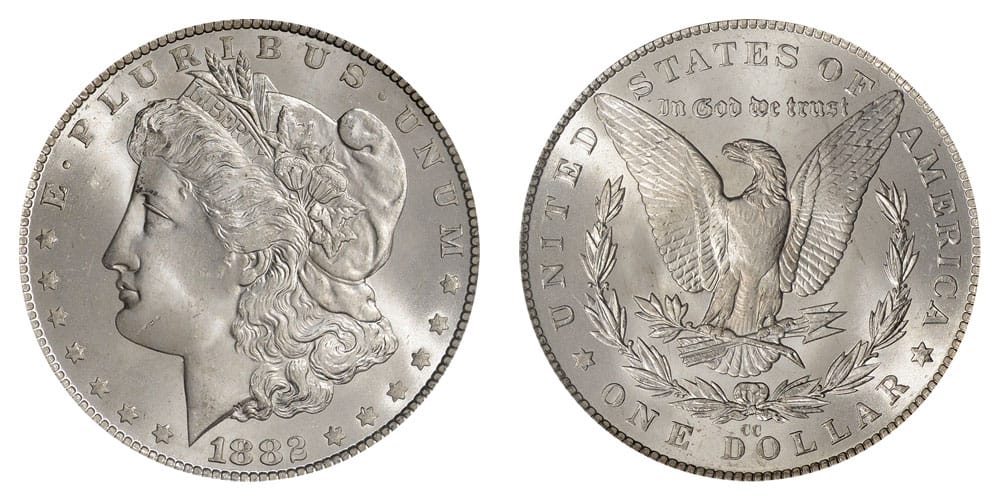 Most collectors consider Morgan silver dollars minted in Carlson City the rarest and most costly coins produced in 1882. The mintage of 1,133,000 pieces was low, and most haven’t survived by now.

The most significant error from 1882 is the Morgan silver dollar with the O struck over the S mint mark. It is a result of dies initially designed for the mint in San Francisco and then altered for the New Orleans mint’s needs.

You can recognize two variations. The strong one is tougher than other Morgans and scarce, while PL and DMPL pieces virtually don’t exist.

The weak re-punched variety includes weakly struck mint marks. It is a less desirable option, but this error rarity makes coins in this group collectible and expensive. However, you can expect a piece in an MS 64 grade to be twice as cheap as a strong strike coin.

FAQ about the 1882 Morgan Silver Dollar

Like other Morgan silver dollars, those produced in 1882 are rare because of their age. Plus, those minted in Carlson City and proofs are particularly scarce, thanks to low mintage.

Which 1882 Morgan silver dollar is worth a lot of money?

How much is the 1882 No Mint mark Morgan silver dollar worth?

What is the most pricey Morgan silver dollar?

Thanks to their age, you can expect Morgan silver dollars to be worth more than their face value. However, several beautiful, well-preserved pieces were paid over half a million dollars at auctions. The most expensive coins reached prices from $528,000 to $881,250.