The quarter issued in 2020 has what some consider to be the most adorable image on any American coin. It features a mother and pup fruit bat. And it’s more commonly known as the “Bat quarter”.

But if you’ve got one of these coins, you might be wondering if it’s valuable. That’s what we’re here to investigate!

We’re going to look at the 2020 Bat quarter value. We’ll find out more about the design and its interesting features. And we’ll learn more about the coin’s short history along the way.

Ready to find out more? Let’s dive in!

History of the 2020 Bat Quarter

The quarter issued in 2020 was one of a series known as America the Beautiful. The first quarters in the series were issued in 2010, and the last in 2021. They were designed to showcase historic and natural sites of national significance.

The obverse of all the America the Beautiful quarters carry the portrait of the first US president, George Washington. But it was the reverse that commemorated the different sites.

The first coin to be released honored the Hot Springs National Park in Arkansas. It depicted the headquarters of the park, with its ornamental fountain in front.

Other subjects included a bison and Old Faithful for Yellowstone National Park, the Marble Park for the Grand Canyon, and the Lincoln Bridge for the Chickasaw National Recreation Area.

The Bat quarter was the 51st coin in the series. It was the design chosen to commemorate the National Park of American Samoa. And it was released in February 2020.

The American Samoa National Park is the most remote National Park in the USA, located some 2,600 miles south-west of Hawaii. It has an area of 13,500 acres, with almost all the land covered by rainforest. 4,000 acres of the park are underwater.

The coins were struck in Philadelphia, West Point and San Francisco. The series was designed to attract a new generation to coin collecting. It followed in the footsteps of the 50 States Quarters, which had been immensely successful in this.

A range of different classifications are available to entice collectors. They include coins from Philadelphia and San Francisco classified as “first strike” and “first day of issue”. And the West Point quarters include “early find”, “first week of discovery” and “first discovery” varieties.

Features of the 2020 Bat Quarter

The Obverse of the 2020 Bat Quarter 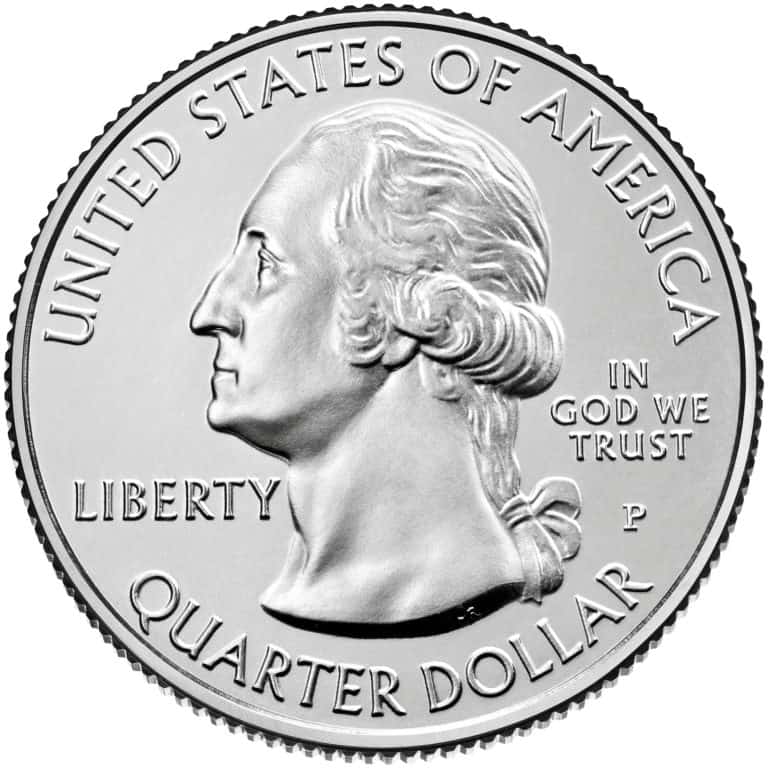 The obverse of the 2020 Bat Quarter is the same image that appears on all the America the Beautiful quarters. And it will be familiar to every American. It’s the portrait of the first president, George Washington. And it’s been used on every quarter since 1932.

It was the work of an artist called John Flanagan. He in turn based it on a bust of the president by the French sculptor Jean-Antoine Houdon. Houdon had taken a plaster of Paris mask of Washington’s face while the president was alive, and his was considered the definitive portrait.

Before being used for the America the Beautiful Quarters, Flanagan’s portrait was carefully restored to bring out its subtle details. It shows Washington in profile facing left. Above his image the words “United States of America” curve along the top edge of the coin. The denomination is at the bottom.

To the left of Washington’s portrait is the word “Liberty”. To the right is the motto “In God We Trust”. And beneath the motto is the mint mark showing which facility the coin was struck at. Look for a “P” for Philadelphia, “D” for Denver, “S” for San Francisco, or “W” for West Point.

If the quarter was struck in West Point, it will also have a “privy” mark on the left-hand side. This only appears on 2020 quarters. It commemorates the 75th anniversary of the end of World War II.

It has a number 75 inside an irregular shape. That shape is the outline of the Rainbow Pool at Washington DC’s World War II Memorial.

The Reverse of the 2020 Bat Quarter 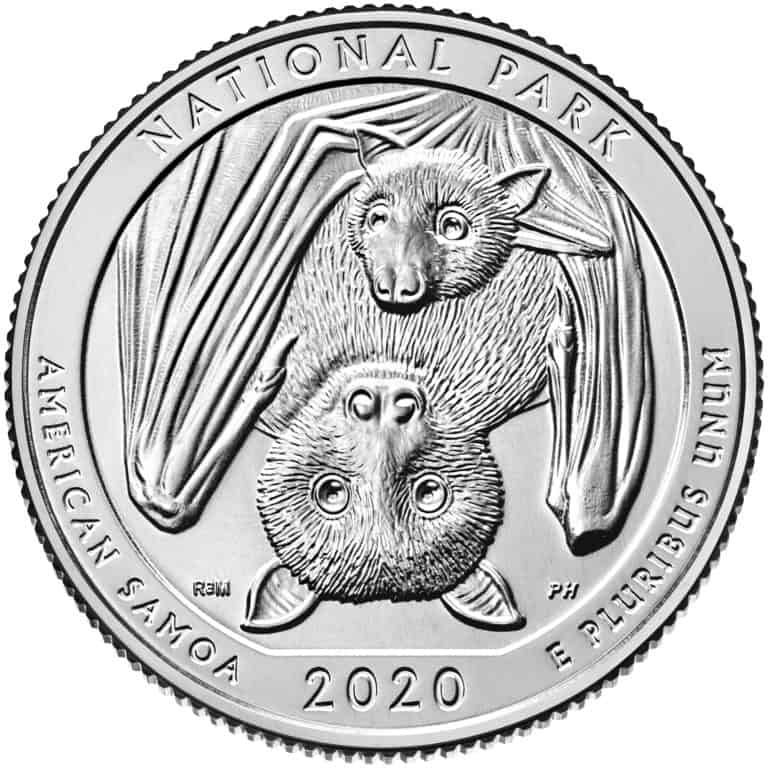 The reverse of the 2020 Bat Quarter shows two Samoan flying foxes, a mother and her pup. The image was chosen because of the care with which this species rears its young. And it was designed to raise awareness of the twin threats facing them: commercial hunting and habitat loss.

It was also a fitting choice to mark the National Park of American Samoa. It’s the only National Park in the USA where the fruit bat lives.

The image is surrounded by a border. At the top, the words “National Park” follow the curve of the coin edge. “American Samoa” is inscribed on the left side, while the Latin motto “E pluribus unum” is on the right. It means “From the many, one”, and refers to the union of the states.

The initials RBM appear towards the bottom on the left, and the initials PH are on the right. They stand for the designer, Richard Masters, and the sculptor, Phoebe Hemphill.

Other Features of the 2020 Bat Quarter

The 2020 Bat quarter measures 24.3 millimeters in diameter, and it has what’s known as a “reeded edge”. Turn the coin on its side, and you’ll see a series of grooves running around it at right angles to the coin faces. These are the reeds.

They first appeared on coins in the 18th century, and they were designed to prevent fraud. The patterned edge meant it was easy to see if any precious metal had been shaved from the coin, reducing its value.

Most of the 2020 coins are copper clad in an alloy of 75 per cent copper and 25 per cent nickel. The San Francisco mint facility also produced a proof coin in 99.99 per cent silver. The clad coins are known as Type 1, while the silver ones are Type 2.

This YouTube video from the US Mint features Phoebe Hemphill talking about sculpting the design for the 2020 Bat quarter. 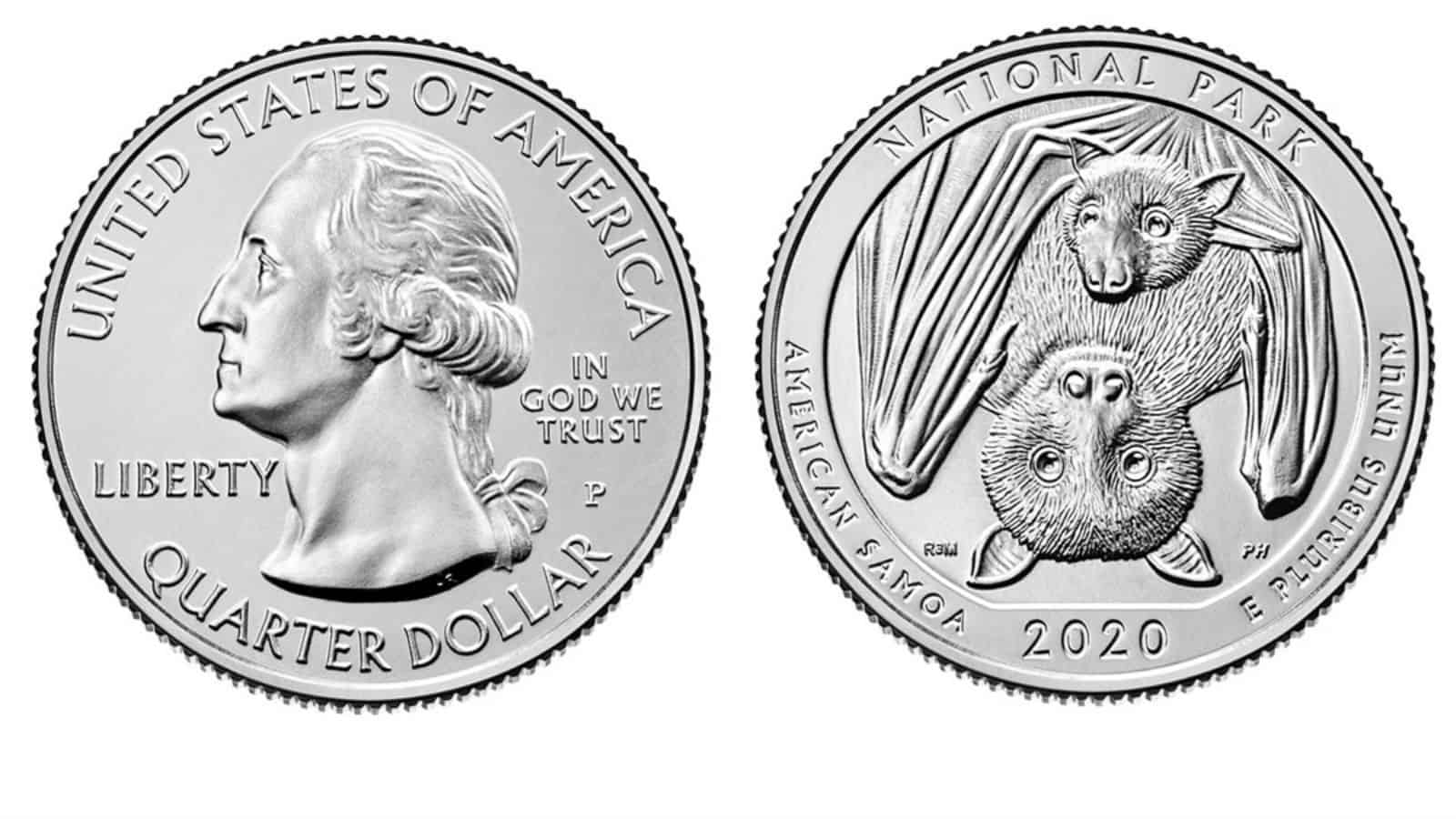 The Philadelphia Mint facility produced over 200 million bat quarters. These can all be identified by the “P” mint mark on the obverse.

Philadelphia was the first of the US Mint facilities, and originally it had no need to distinguish its coins from those struck anywhere else. The position remained the same until 1942, when a “P” was briefly introduced to the nickel.

It quickly disappeared again, not returning until the Susan B. Anthony dollar of 1979. And from 1980 onwards, the mint mark was used on all denominations.

So you know you have a Philadelphia Bat quarter. How much might it be worth?

In circulated grades, it’s not worth much more than its face value. And even in mint state, values are quite modest.

Values cross the threshold into three figures at MS68, the finest examples to have been valued by the PCGS. But they are still an affordable $140 apiece. 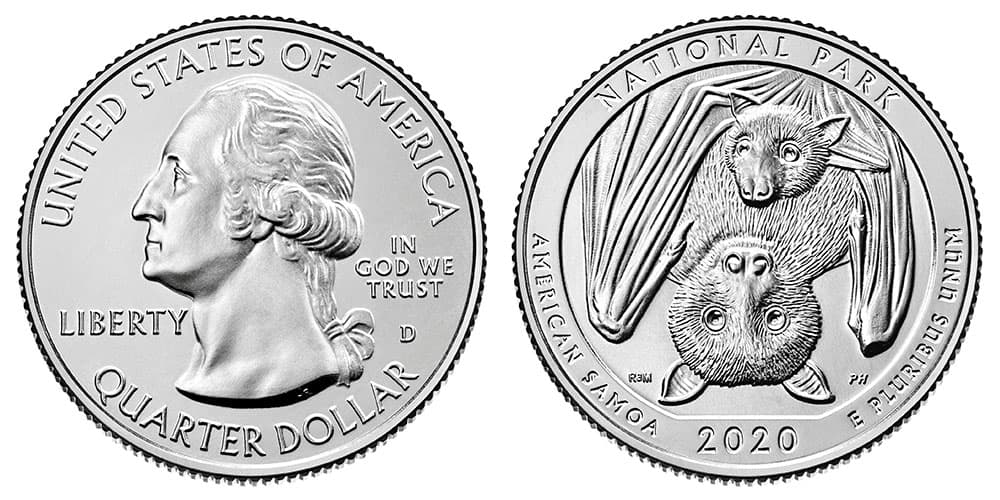 The Denver Bat quarters can also be identified by their mint mark. Look for a small “D” on the obverse beneath the motto “In God We Trust”.

The Denver quarters are more collectable than their Philadelphia counterparts. There’s a premium on their value from MS64 and upwards. That starts off at a humble $1, with an MS64 Denver quarter valued at $6 by the PCGS.

But the gap opens up for the finest examples. The highest quality 2020 Denver Bat quarters to have been graded by the PCGS are MS68. And those are valued at $215. That’s half as much again as the same grade in a Philadelphia Bat quarter.

You can spot a coin that was struck at the Mint facility in West Point by the “W” on the obverse. But the West Point quarters struck in 2020 also have another distinguishing feature.

They have what’s known as a privy mark. These marks can be used for several purposes, including to show that the coin is part of a set, or to commemorate a special occasion.

In the case of the 2020 W Bat quarter, the privy mark commemorates the 75th anniversary of the end of the Second World War. It’s a 75 inside an irregular shape – the outline of the Rainbow Pool at the war memorial in Washington D.C.

The West Point 2020 Bat quarters attract considerable interest from collectors. An example graded MS64 is valued by the PCGS at $30. That’s five or six times as much as the equivalent coin from Philadelphia or Denver.

That value increases to $47 at MS65 and $78 at MS66. The finest examples to have been graded by the PCGS were assessed at MS67. 52 coins have already been graded at this level, and they’re valued at $425 each. 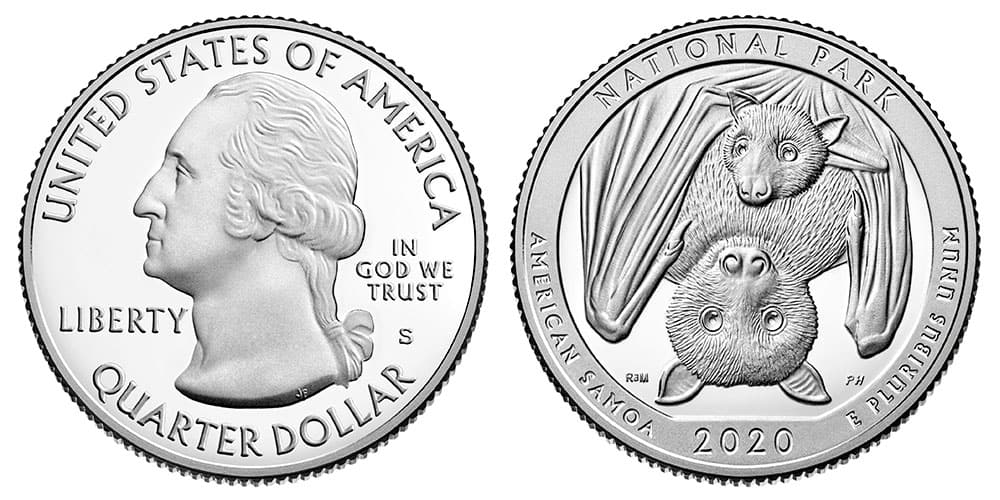 The San Francisco Bat Quarter can be identified by its “S” mint mark on the obverse.

Values tend to be slightly higher than for Philadelphia or Denver quarters. But they’re not as collectable as the coins struck in West Point.

The Type 2 silver Bat quarter was only minted in Philadelphia. It was a proof coin – one struck using carefully prepared dies on highly polished planchets. It was a premium coin for the collectors’ market, so was carefully stored and is readily available today.

All the known examples of this proof are deep cameos. Those are coins that have a marked contrast between reflective fields (the flat parts of the coin) and frosted designs.

The PCGS only offers values for the very finest grades of this coin – PR69 and a flawless PR70. A PR69 is valued at $27, while a PR70 is $45. So if you want to purchase a coin of exceptional quality for a modest outlay, the 2020 Bat quarter proof is a great option. 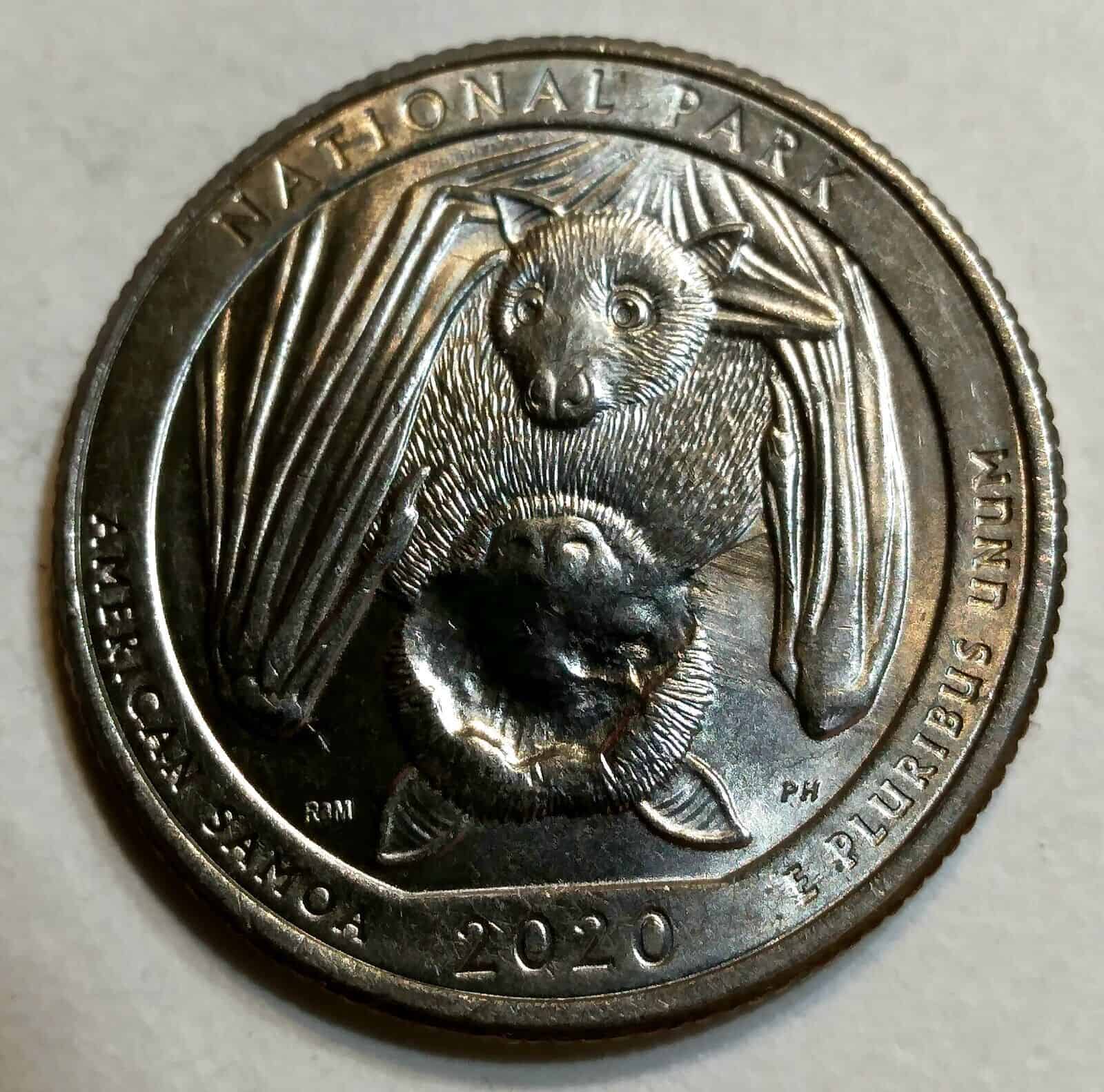 Even modern coins can show mint errors. One 2020 Bat quarter from Philadelphia had what’s known as a “strike through” error.

This type of error happens when a foreign body gets between the planchet and the die. The debris is then struck through onto the coin face. Sometimes it’s retained on the coin itself, and sometimes it isn’t.

The 2020 P Bat quarter had a dramatic strike though error which appeared on the bat’s face. It shouldn’t have got through the quality control process, but somehow it did.

This YouTube video from Blue Ridge Silverhound looks at this 2020 Bat Quarter error coin in detail.

The 2020 quarters featuring fruit bats commemorate the National Park of American Samoa. The value of an individual coin will largely depend on its condition. High quality coins in excellent condition are the most valuable. And interesting errors can be valuable too.

But even some gem quality coins can be worth fairly modest sums. The PCGS values a 2020 Bat quarter struck in Philadelphia and graded MS65 at just $7.

What’s the value of a Fruit Bat Quarter minted at the West Point Mint?

2020 Quarters struck at the Mint facility at West Point are particularly sought after by collectors. As well as the W mint mark, they have a privy mark commemorating 75 years since the end of the Second World War.

A 2020 West Point Bat quarter graded MS64 is worth about $30. And the finest known examples, graded MS67, are valued at over $400 apiece. Not bad for a quarter that’s only a couple of years old.

So we're not going to talk about the fact that they made a Covid quarter and tried to cover it with all the "cute image" and Samoa and National Park talk. LOL