1904 was an interesting year for American coins. It was the first time that external artists were invited to redesign coins because President Theodore Roosevelt wanted our hard currency to have more artistic merit. This decision began the death throes of the Indian Head Penny as well as the Barber Coinage. Let’s take a look at the 1904 Indian Head Penny Value.

History of the 1904 Indian Head Penny

In the early days of our nation’s history, we used British coins from our UK Colonists and Spanish coins from our Mexican neighbors. But starting in 1792, we started minting our own coins, mostly in gold and silver. We did have copper pennies, two-pence, and three-pence for postage, but these were just for domestic use and weren’t legal tender until 1864.

Back then, mint engravers were in charge of coin design. Since they already worked for the government, they didn’t get extra credit for their ideas. Yes, they were allowed to sign their work, but they would usually place a barely visible initial at the cut-off line of the portrait, or hidden somewhere in the artwork. The Indian Head Penny was an excellent example of this.

The designer, James B. Longacre, didn’t put his initials on the coin until it became legal tender in 1864. And he hid it in the locks of Lady Liberty’s hair so you can’t even spot it unless you know where to look! Conversely, external artists would place their initials on some visible part of the backdrop, and still do! It makes sense – they need to drum up business…

But this seemingly innocent gesture caused clashes between the mint and external artists, and it’s a problem that traversed several coins including the Lincoln Cent, the Mercury Dime, and even the 50 States Quarters of 1999 to 2008! Back in 1864 though, the presence of coins with and without the L raised prices drastically due to the 1864-L Penny’s conditional rarity.

The Closing Era of the Indian Head Penny

Still, these were problems that were yet to affect the 1904 Indian Head Penny. Elsewhere, Chief Mint Engraver Charles Barber was battling Roosevelt’s favorites – Augustus Saint-Gaudens, James Earle Fraser, and Victor David Brenner. These three artists worked in the same studio, with Monsieur Saint-Gaudens as the boss and the other two as his assistants.

Saint-Gaudens was a personal friend of Theodore Roosevelt’s, and the president asked the mint to hire him. His task was to beautify American coins, starting with the $2.50, $5, $10, $20, and 1c coins. He died before finishing his commission, and the assistants mentioned above took over. They later produced the Buffalo Nickel and the Lincoln Cent respectively.

Meanwhile, the Indian Head Penny was chugging along and would survive until 1909 before the Lincoln Penny replaced it. The coin depicted a younger version of Lady Liberty adorned in pearls and a Native American man’s feathered tiara. It was minted from 1859 to 1909, and in those five decades, coiners had mastered its minting process and honed it to perfection.

This might be why the 1904 Indian Head Penny only has one error listed in the Cherry Picker’s Guide – the FS 301 – though we’ll talk about that later. But the lack of mint mistakes might also be due to disinterest in the coin. It circulated for 50 years so numismatists took it for granted and didn’t consider it collectible. Today though, the investors are getting curious!

Features of the 1904 Indian Head Penny

When you’re reading about coins, you might come across some unfamiliar jargon, so let’s start by demystifying some of it. Coins are made from blank discs called planchets that are punched out of metal sheets. The discs are punched using a blanking machine, and each sheet has a designated metal composition based on its intended size and denomination.

The front or heads side of a coin is called the obverse and the back or tails side is called the reverse. The thin sides are called edges. The words on a coin are called mottos or legends while the images are known as devices and the backdrop or background is called the field. The edges of a coin can be smooth or plain, but they might also have reeds and some writing.

The Obverse of the 1904 Indian Head Penny 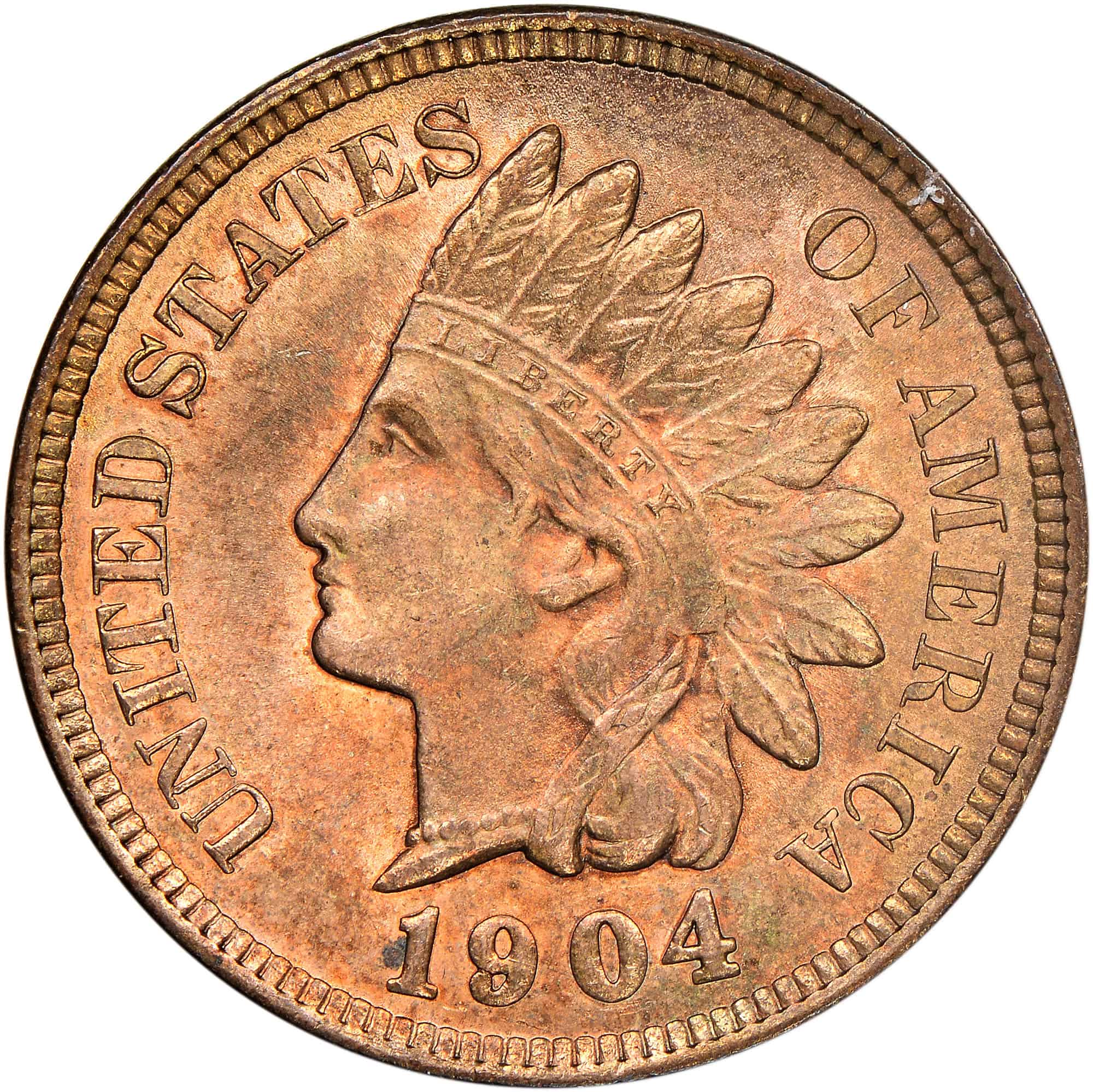 The obverse (heads side) of the 1904 Indian Head Penny features a young Lady Liberty. She has a strand of pearls around her neck and is wearing a Native American man’s headdress. The words ‘United States’ are in front of her face while ‘Of America’ sits behind her head. The date is at the bottom of the coin. The L in her hair identifies the designer, James B. Longacre.

The Reverse of the 1904 Indian Head Penny 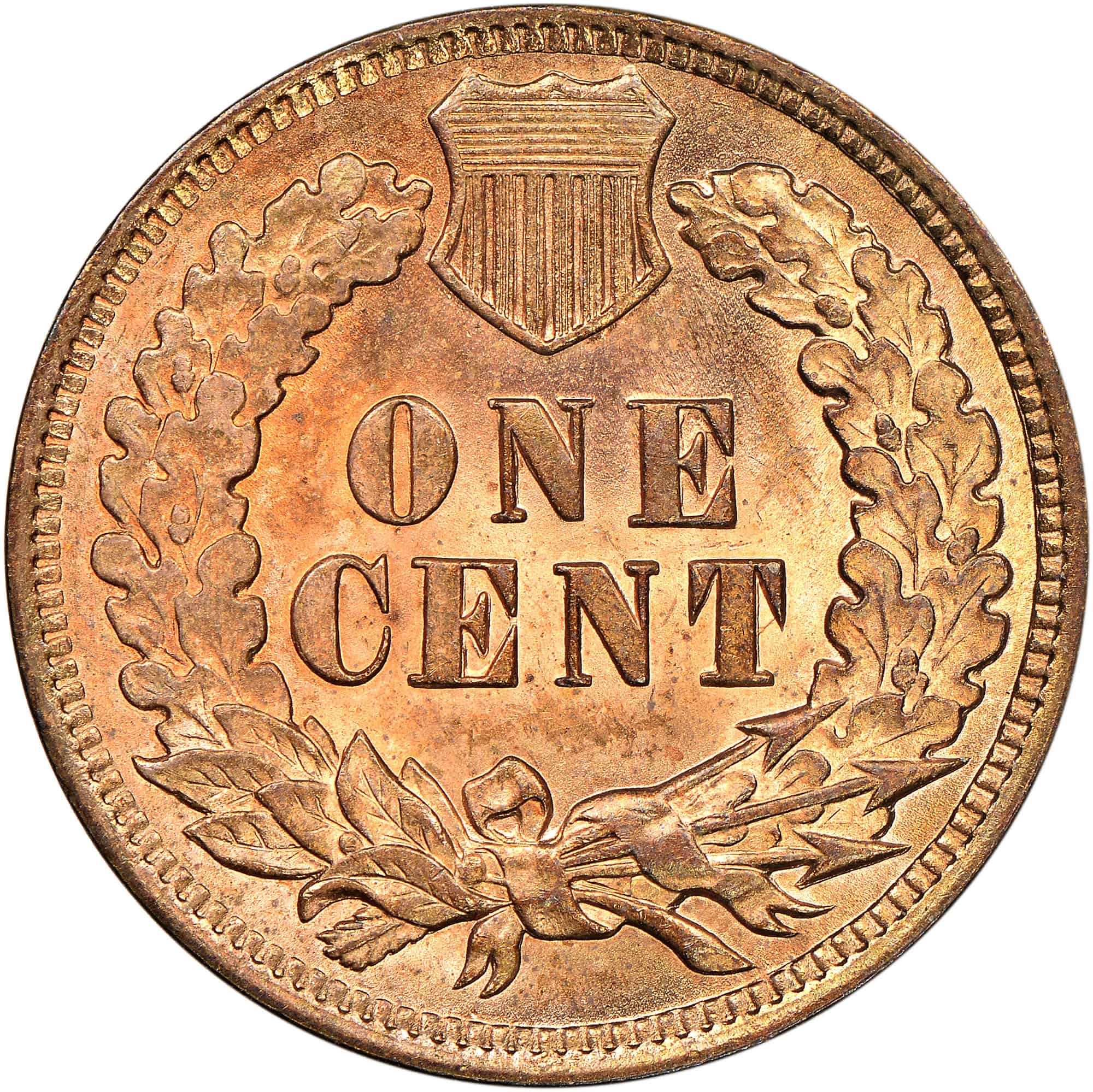 The reverse (tails side) of the 1904 Indian Head Penny has its denomination, One Cent, right in the middle of the coin. These words are surrounded by a wreath of oak sprigs tied with a ribbon. The ribbon holds three arrows at the bottom of the coin. At the top of the coin, a shield sits between the tips of the oak wreath. It has denticles on its front and back rims.

Other Features of the 1904 Indian Head Penny

The 1904 Indian Head Penny is a bronze coin, sometimes described as French Bronze. It’s made of 95% copper and the 5% balance is a mix of tin and zinc, though it’s sometimes plain tin or plain zinc. The coin weighs 3.11g and is 19.05mm in diameter, so it’s one of the Small Cents. For reference, earlier cents were larger and often measured 28mm to 29mm across.

Mint marks can sometimes add extra value to the price of a coin. But in 1904, coins could only be minted in Philadelphia so they had no mint marks. You might see them listed as (P) coins because of this. But since these were copper coins, they were color-graded as RD for red, being the best quality, followed by RB for reddish-brown, and finally, BN from brown. 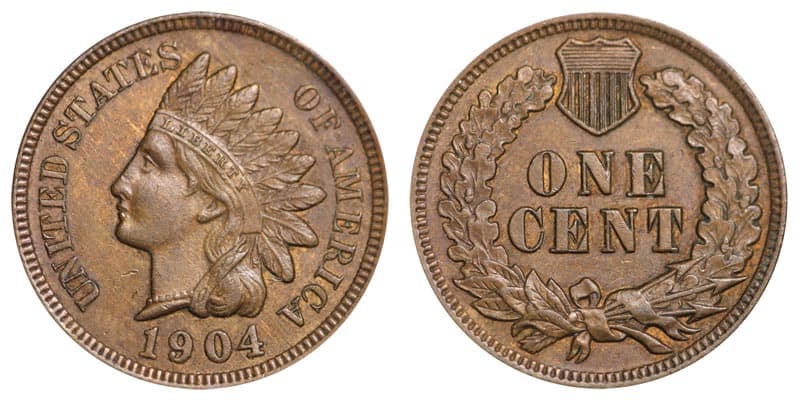 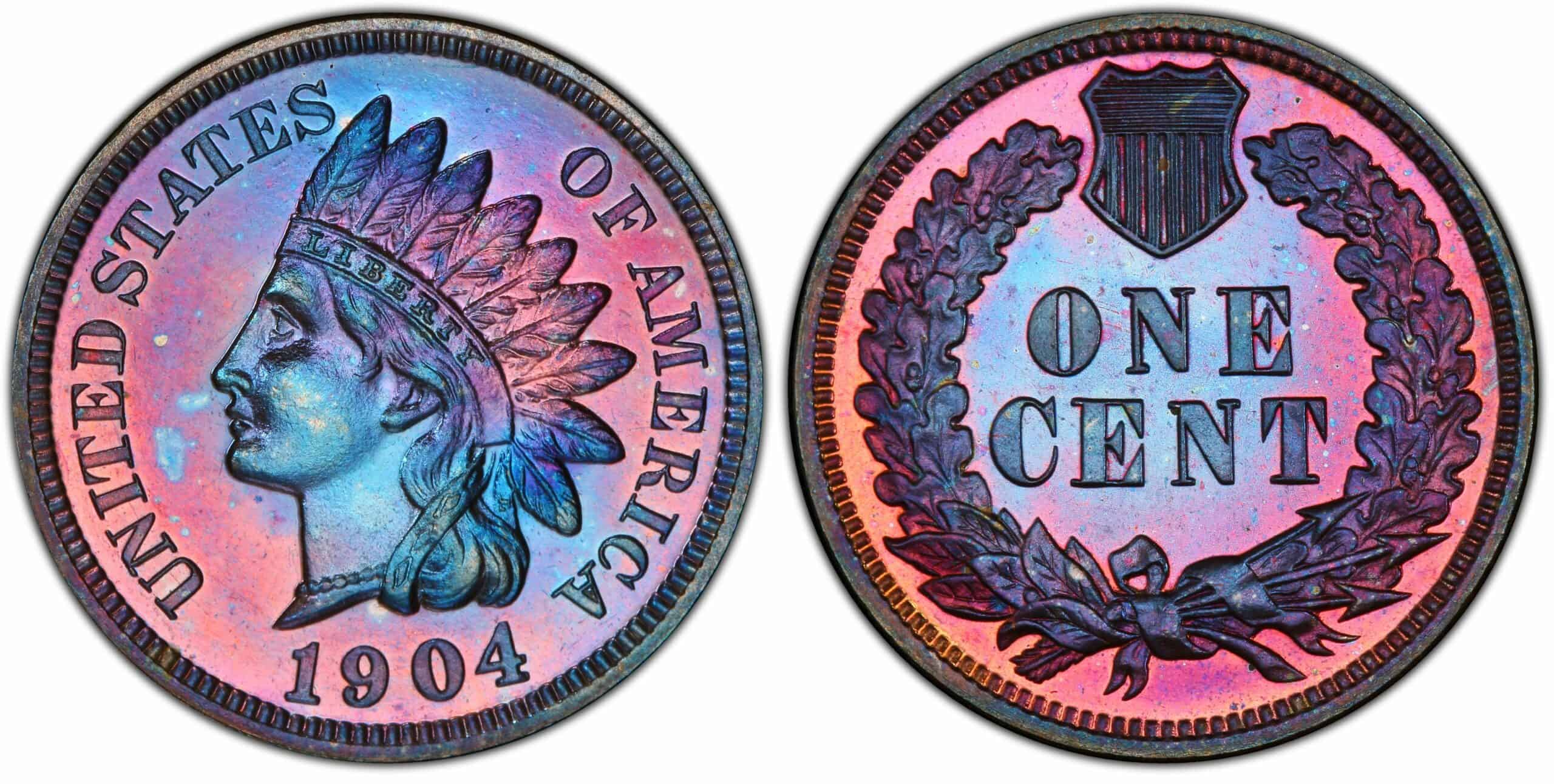 Proof coins are high-quality coins minted in a unique way to give them extra clarity and sharper detail. Initially, they were made to test dies before the mass production of business strike coins, which are also called regular strikes or circulation strikes. Once the proof coin had verified the die as accurate and correct, a copy would be sent to the archives for records.

The mirroring is achieved by tumbling the planchets among stainless steel balls for extra shine, then rinsing them off. The die is also polished with horse hair brushes. For the frosting, you could pickle the dies in acid or etch them with computerized lasers. But some of the acid etching wears off after every strike. The first, shiniest coins are Deep Cameo or Ultra Cameo.

These days, proof coins have a mirror-like finish, and that was also the case before 1900. But thanks in part to Theodore Roosevelt’s currency beautification project, certain coin designs were extra curvy. This made it harder to polish them sufficiently, so from around 1909 to 1917, the mint started making Matte Proofs using a technique developed at the Paris Mint.

These matte proofs were unpopular at the time, but are sought-after by collectors today. Instead of using the standard reflective planchets and dies, matte proofs were made with high-quality dies then sandblasted to achieve that matte finish. These coins were then stored in tissue paper that was laced with sulfur. The paper prevented tarnish but caused toning!

Coins start life as 8” prototypes made of plaster, rubber, and epoxy. These go into a reducing machine to make a steel master hub, which then strikes a steel template to make the master dies. These dies make working hubs, which make working dies. And the working dies strike planchets to form coins. All these stages involve at least two strikes inside a dated coin press.

If the target moves between strikes, you can get doubling or tripling errors that can raise the value of the coin. Other minting mistakes include denomination errors, mixed metal combos, contaminants that get mashed onto coins, die caps from jammed feeders and hoppers, or coins from other countries. Let’s take a look at some mint mistakes you can convert to cash. 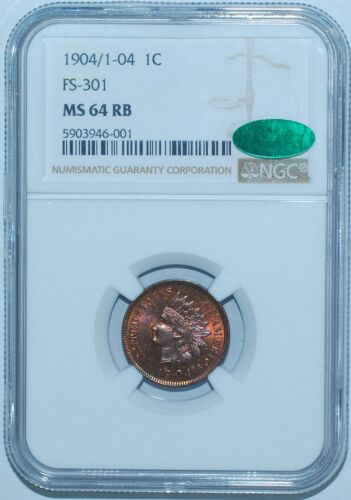 The 1904 Indian Head Penny doesn’t have too many verified errors, but the RPD is fairly easy to spot with a jeweler’s loupe or coin microscope. First off, FS means First Strike, and it refers to errors that were discovered, confirmed, and listed within the first 30 days of the coin’s existence. So they’d have to be evaluated and recorded within a month of their release.

Sometimes, the planchet’s position will shift between die strikes if it’s not securely placed. When this happens before the first strike, you can get an off-center error that leaves part of the planchet unmarked. And this mint error is obvious enough that you can spot it without a coin microscope. In MS 63, this 10% Off-Centre Indian Head Penny sold for more than $250.

FAQs About the 1904 Indian Head Penny

How Much is my 1904 Indian Head Penny Worth?

What Year is the Rarest Indian Head Penny?

They only minted 852,500 that year, and only 3 of them are currently available for sale. That said, some people believe 1909-S is the rarest because it has the lowest mintage – only 309,000. But if you combine that with the 1909 (P)s, about 14.6M Indian Head Pennies were made that year, which still gives 1877 lower volumes. Besides, older coins are always rarer.