The Indian Head Penny was minted from 1859 to 1909, though a few 1858 pattern coins do exist. Oddly, the portrait wasn’t Native American at all! It was Lady Liberty wearing the male Native American feather headdress. It was quite a popular coin, both with the mint and with the public. And collectors still love it today, so let’s study the 1899 Indian Head Penny Value.

History of the 1899 Indian Head Penny

US coins were first minted in 1792, and the 1793 penny was a 3cm coin of pure copper. But as copper prices rose, the melt value of the coin surpassed its face value, so the size of the coin was shrunk to about 19mm, with its metal composition changing to 88% copper and 12% nickel. The newer, smaller coins had a whitish tone and were nicknamed Nicks or Whites.

These early pennies were thicker, and during the Civil War, they were hoarded for their nickel content. Starting in 1864, the mint made the coins slimmer and switched their metal mix to 95% copper and 5% tin or zinc. You could use these coins for commercial transactions but you couldn’t pay taxes with them because only gold and silver counted as legal tender.

Like all copper coins, the Indian Head Penny is graded according to the quality of its copper coloration. The highest grade is RD for red, followed by RB for red-brown or reddish-brown and the lowest grade is BN for brown. But this mostly applies to the post-1864 bronze cents since the earlier Nicks or White Cents of 1857 to 1863 had a brighter and lighter appearance.

James B. Longacre and the Feathered Tiara

The coin was designed by James Barton Longacre, who was the Chief Engraver at the Philadelphia Mint. He made 12 different pattern coins, including the feathered tiara. Though typically worn by Native American men, he felt it was an American symbol of liberty and was more appropriate than the earlier Phrygian caps that – to him – represented slavery.

The mint preferred this design to his previous Flying Eagle, which had high points of relief on both sides, making the coins harder to mint and stack. He claimed that he had based Lady Liberty on Crouching Venus, a statue that the mint had borrowed from the Vatican. Also, while nickel coins were more likely to be hoarded, they were harsher on mint equipment too.

The dies that struck bronze planchets lasted longer than the dies striking nickel, meaning the mint could save money and raise revenues. And since pennies had always been the mint’s most profitable coins, Mint Director James Pollock was a big fan of these new non-nickel coins. However, monopolizing nickel moguls like Joseph Wharton strongly opposed them.

Following this agitation, base metal coins like the Indian Head Penny were formally accepted as legal tender via the Coinage Act of 1864. Abraham Lincoln signed the act into law in April. Early Indian Head Pennies don’t have Longacre’s initials, but he inserted an L on a few 1864 Pennies and beyond. About 20 of the Proof 1864-L Indian Head Pennies are known to exist.

Features of the 1899 Indian Head Penny

Certain terms are used to describe the features of a coin, so let’s go over the most important ones. The blank discs that make a coin are called planchets. They’re punched from a coiled metal sheet made of the right metal mix. The sheet is flattened then punched into discs in a blanking press. The heads side of a coin is called the obverse and the tails side is the reverse.

The images on a coin are called devices, the words are legends or mottos, and the backdrop is called the field. The thinnest sides of a coin are called its edges, and they can be reeded or smooth/plain. To maintain the shape and thickness of a coin, the mint uses a detachable three-piece mold. This system was first used in England’s Soho Mint during the late 1700s.

The Obverse of the 1899 Indian Head Penny 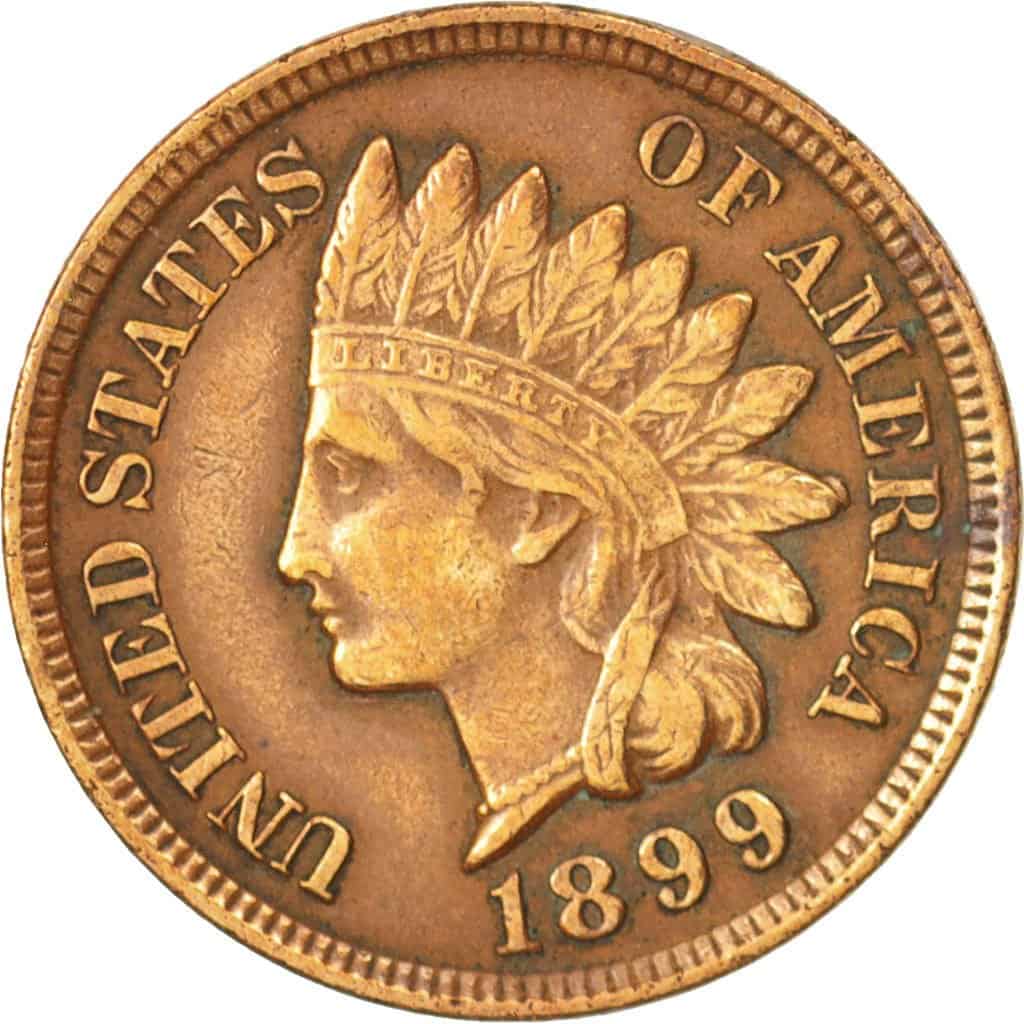 The obverse (heads side) of the 1899 Indian Head Penny features a young Lady Liberty with a string of pearls and a Native American man’s headdress. She faces left, with ‘United States’ in front of her face, ‘Of America’ behind her head, Liberty on her headband, and L for Longacre hidden in her hair. It has denticles along the rim. The mint date is at the bottom.

The Reverse of the 1899 Indian Head Penny 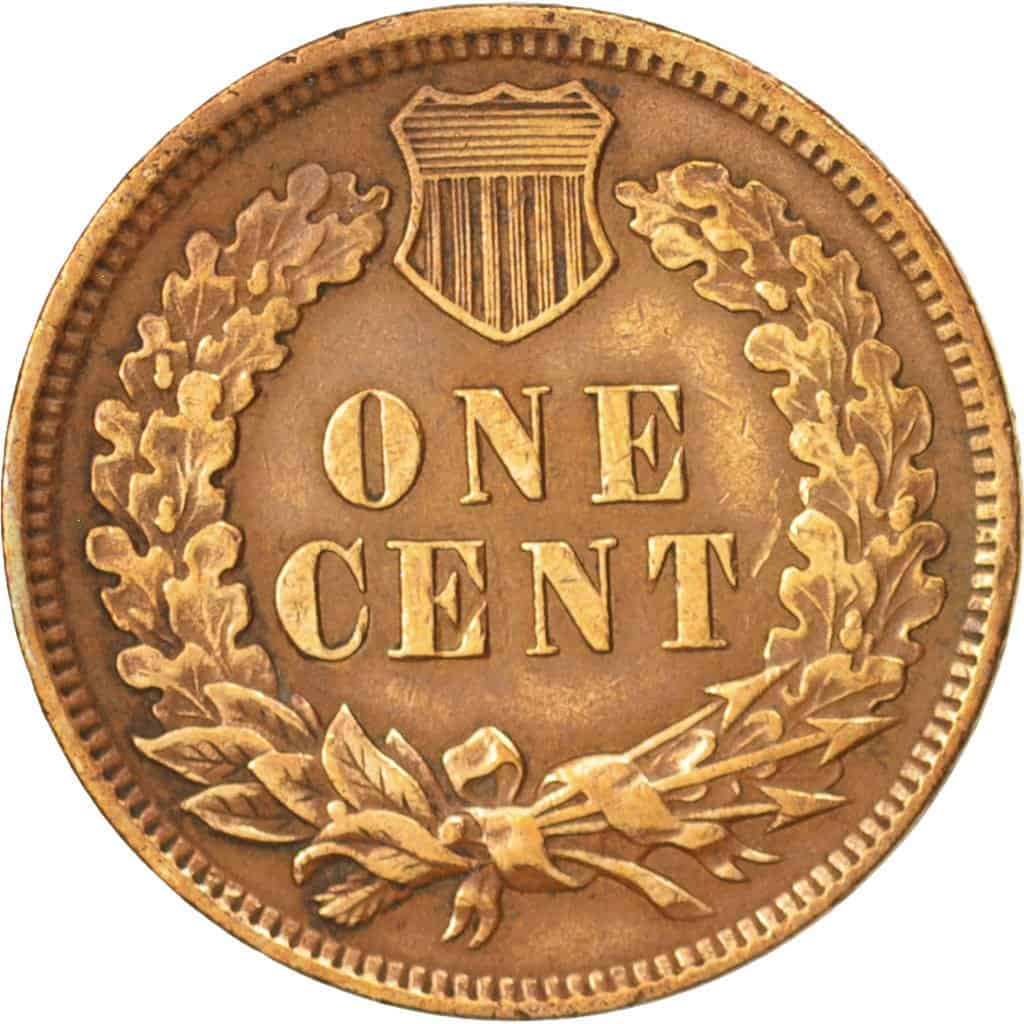 The reverse (tails side) of the 1899 Indian Head Penny has denticles as well. The coin’s face value, One Cent, sits in the middle of the coin, framed in an oak wreath with a ribbon. The ribbon is wrapped around three arrows at the bottom with a shield at the top. For reference, 1859 coins had a laurel wreath and a ribbon instead but didn’t have the shield or arrows.

Other Features of the 1899 Indian Head Penny

The 1899 Indian Head Penny was 95% copper and 5% tin or zinc, sometimes both. It was 19.05mm in diameter and had a smooth edge without any reeds. The coin weighed 3.11g. The model for Lady Liberty is thought to be Longacre’s daughter Sarah at age 12, but both father and daughter denied this rumor. Also, she was 30, so the apocryphal timing doesn’t line up.

Some people collect coins for pleasure while others are interested in their investment value. And the resale price of a coin is driven by mint marks, mintage volumes, rarity, and errors. In 1899, coins could only be minted in Philadelphia, and that didn’t change until 1906. This means 1899 Indian Head Pennies had no mint marks, so that doesn’t influence their value. 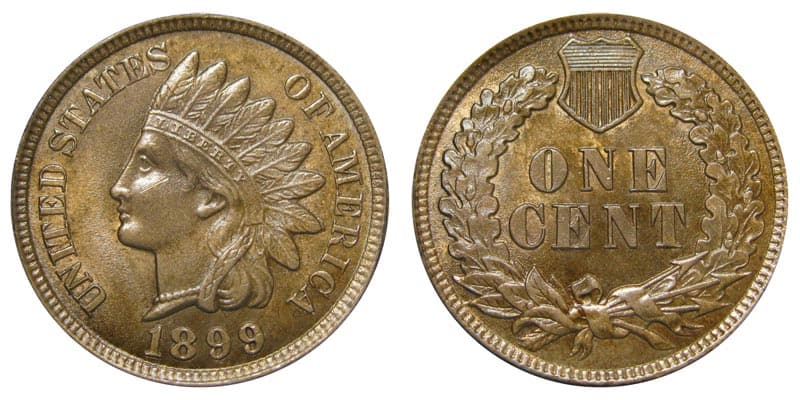 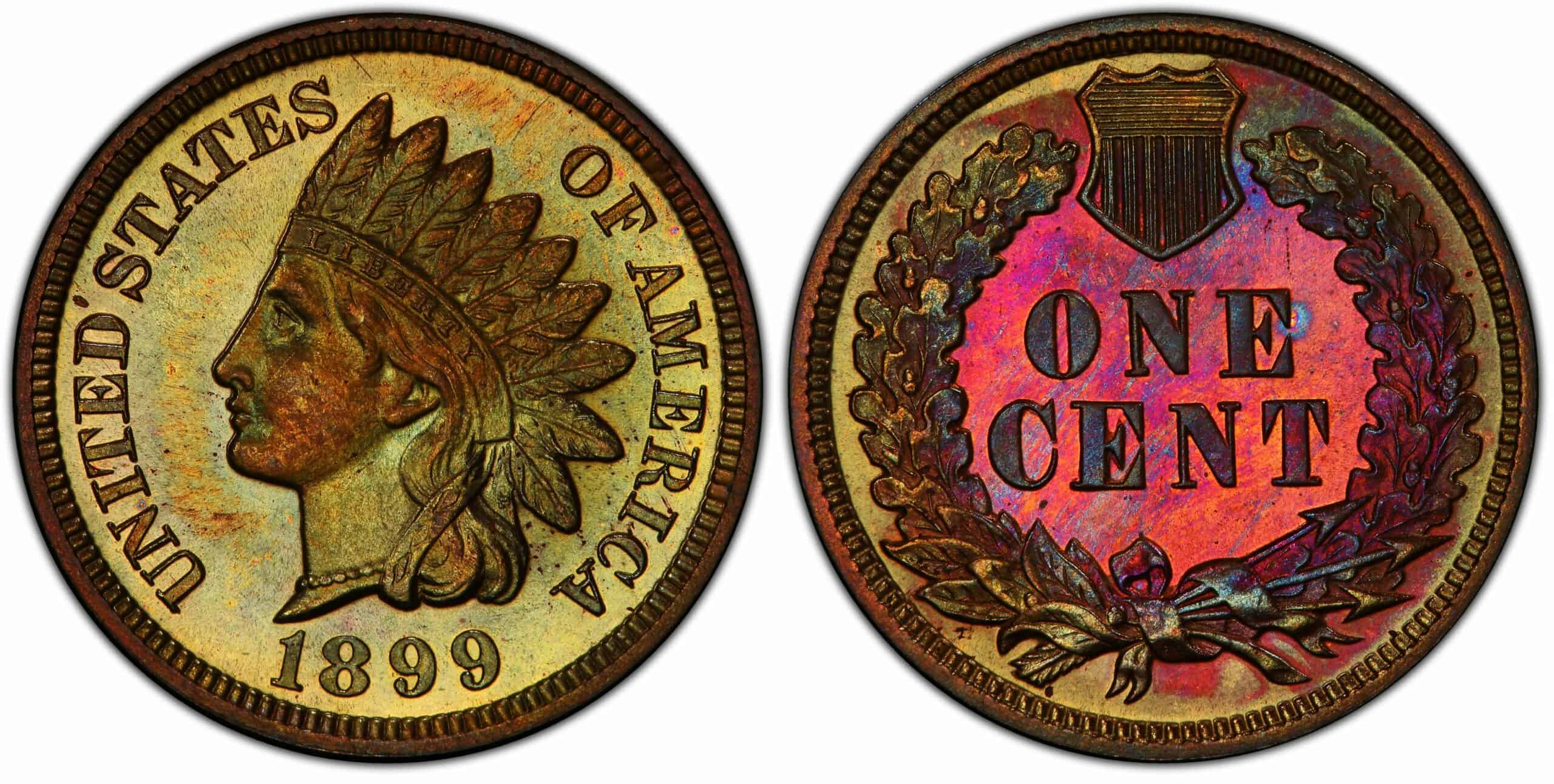 The Philadelphia Mint made 2,031 Indian Head Proof Pennies in 1899. Back then, proof coins still used the matte finish that was popular in France. It wasn’t until 1936 that the US Mint re-introduced reflective proof coins. Also, proof coins were initially a quality control tool. Their purpose was to ensure the dies were accurate, and a copy was sent to the archives.

But as numismatists started paying attention to American coins, the mint would sell them proof copies at premium prices. Although they had a matte finish, proof coins had sharper details and almost zero physical blemishes. Plus, nobody wanted to sell theirs because it was seen as a future investment. Their mint condition and scarcity are what made them valuable.

Reflective proofs are made of burnished planchets that are polished before striking. The dies are pre-polished as well. But matte proofs are made on unpolished planchets and dies. The coins are then sandblasted after striking to give that distinctly grainy finish. This technique was popularised by the Paris Mint and adopted by the US in the late 1800s and early 1900s.

After minting, matte proofs were packed in special sulfur-infused tissue paper to prevent tarnish. This paper sometimes toned coins after years of storage. When matte proofs were introduced, collectors preferred mirrored proofs, so the mattes were unpopular. They only made about 2,000 proofs per coin, so they’re attracting interest in today’s secondary market.

Matte proofs were made between 1909 and 1917, while coins before 1908 and after 1936 were mirrored proofs. The reflective fields of the planchet and die were burnished for extra shine while the frosted devices were pickled with acid for that hazy finish. This frosting faded with every strike, so the shiniest – the first 50 to 100 – were graded Deep Cameo or Ultra Cameo.

Coins from 1899 are bona fide antiques, so they’re generally worth reselling. And if they have errors, they can be worth even more. But how do these mint mistakes occur? Well, a coin prototype is used to make a master hub, which is used to make master dies. The master dies make a working hub, which makes a bunch of working dies. These eventually make the coins.

The hub and die all strike their targets multiple times, so if the metal moves between strikes, the next imprint will appear on a slightly different part of the coin, causing errors such as doubling, tripling, off-centers, etc. Other errors include using the wrong planchet, striking a foreign object onto the coin, pushing the metal outside the collar, etc. Let’s explore a few.

Errors discovered within a month of a coin’s original release date are labeled as FS, meaning First Strike. RPD means re-punched date. And FS 301 is an error where the second strike of the date landed slightly to the left at the die stage, probably because the die moved between hub strikes. Check the 8 and the tails of the 9s. An MS 65 RD was $660 in January 2019.

RPDs are defined as varieties because the die error is transferred onto every coin made with that flawed die. Hundreds or even thousands of these coins might be made before the error is caught and corrected. For FS-302, you need a coin microscope to spot the doubling on the serif of the 1, inside the 8, and inside the second 9. An MS 63 sold for $124 in January 2017.

FAQs About the 1899 Indian Head Penny

While lots of 1899 Pennies exist in personal collections, you can only find a few hundred in high grades, so they’re relatively rare. In January 2023, only 66 of these coins are up for sale.

What Year is the Rarest Indian Head Penny?