Do you know which Roosevelt dime with mistakes is worth your time and money? Some of these coins that the US mints began releasing in 1946 have interesting errors.

Not every error dime has the same value. Some, like the proof coins without mint marks, can make you rich. Others with rim clip flaws are a lot more than just their face value.

Either way, it’s the joy of every collector to add such error coins to their list. Most of them are rare in today’s market, making them more valuable.

Let’s have a close look at the most valuable dime error list. You’ll know which Roosevelt dime error is worth owning.

This mercury dime is a treasure that most collectors wish to have on their list. Its errors are in the striking of the year mark on the obverse.

So, besides the coins being old, their imperfections give them the best market price. The workers at the mint punched number 1 and later placed number 2 on top. You’ll see the number 1 on the outer left of the number 2.

This over-the-date error attracts most people in auctions and other avenues of selling the error dimes. Here’s more about this coin.

This Roosevelt dime is also among those with a missing mintmark. While the craftsmen made the coins, they left them without the mintmarks.

Besides, San Francisco minted the coins in a few numbers. It shows that getting them in today’s coinage market is not easy. So, that’s why people value them.

On top of the error and rarity, the beauty of this coin, when in its best mint state, is amazing. If you own these coins, know that you hold a fortune. Here are more specifications about the dime. 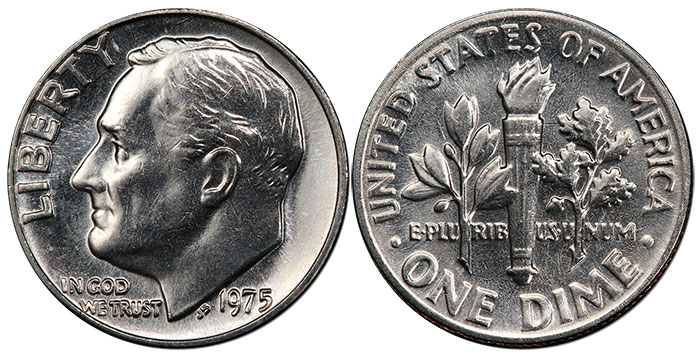 Remember, these coins are rare to get in today’s market. This coin will grant you a fortune if you have it at home and need some cash.

Keeping it in great condition will make you earn more from it. Also, you’d be lucky to own the coin’s proof versions. The following are the other facts about this dime: 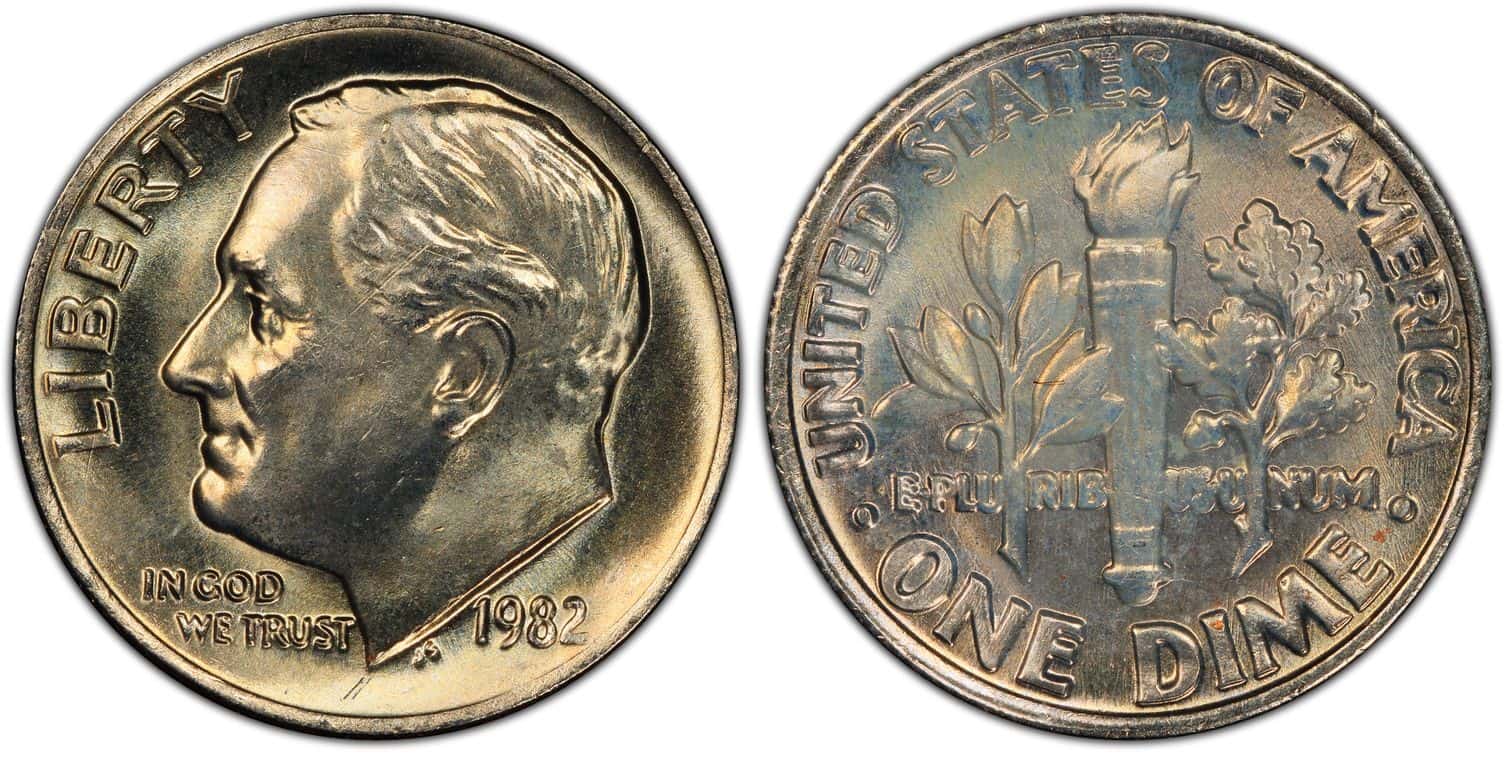 In 1980, the Philadelphia mint began making its coins with the mark “P.” Still, some other coins, like this 1982 Roosevelt dime, don’t have the mintmark.

This common error makes people go for it to fill their lists. Also, the Philadelphia mint made and shipped them to Ohio. But only a few of them with errors went into circulation. 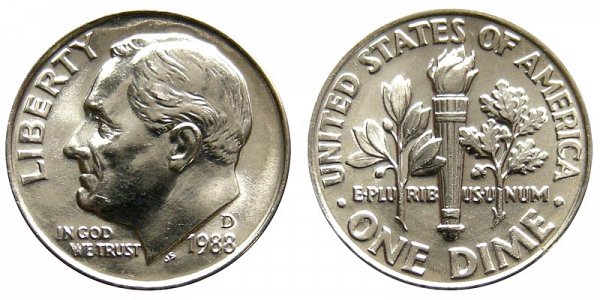 Repunched coins carry a huge value in today’s coinage and collectibles market. This gem from the Denver mint is also a target for many collectors today.

Here, the craftsmen at the mint punched the letter onto the working die, but it left more impressions. These marks tend to overlap and look like they are two in one.

This error appears as a beautiful mistake in the eyes of most collectors. You’ll earn a huge profit if you have such a coin in a great state.

Remember, only a few such coins are present today. Below are the other key facts about this coin. 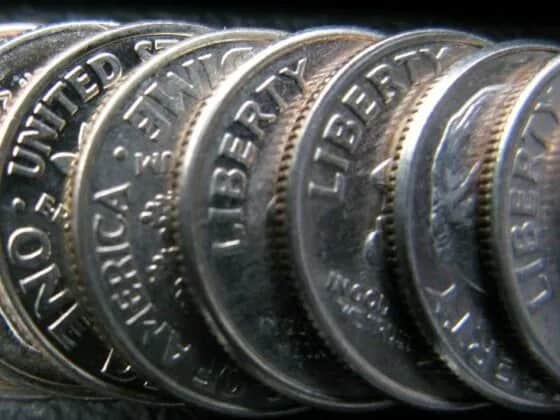 In 1983, the San Francisco mint made coins without the mintmark. But this time, they were proof coins. It shows that these coins have a high market value today.

The mint made the coin collectible and not for circulation. It’s why the coins are rare to get.

Expect them to have a deep frosted touch on the raised areas. This design makes the dime have a fine polished look.

So, besides lacking the mintmark, this coin’s beauty makes it more valuable. Also, below are the other key facts about these coins.

The Denver mint also made several Roosevelt dimes without the “D” mark. Though it’s a common error, collectors always yearn to fill up their list using such dimes.

Since they were proof coins, you should expect them to be rare and high-value. You’ll get them in one of their best silver conditions.

Most miners and collectors would love to own a proof dime with errors on the list. Here is more about this amazing dime. 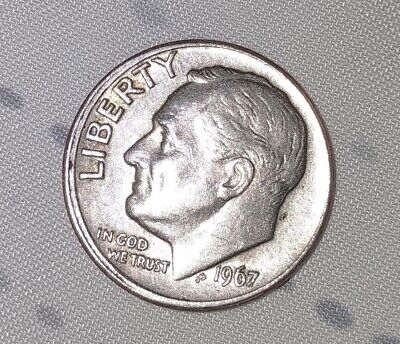 As a collector, your list will be incomplete without having this 1965-error coin. It has a double error and a clip on the rims.

PCGS grades the coin at a high-mint state level despite these errors. Rim clip errors come because of malfunctioning machines while minting the coins.

The doubling is on the “IN GOD WE TRUST” lettering and “JS” under Roosevelt’s neck. Such errors make collectors anxious to add them to their list today.

It sells for at least 69 USD for the clipped one. 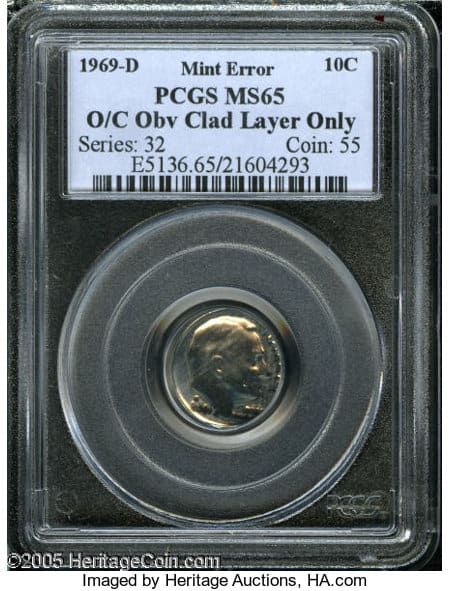 As for this 1969 dime from the Denver mint, it has a unique error. The mint double-struck the coin because they first placed the details on the wrong planchet.

So, during the second strike, the details became 90% off-center. Also, the coins have a straight clip on the sides. Which collector or miner wouldn’t be interested in such an error coin?

Be sure to sell or buy this coin at a huge price when it’s in a great mint state. They are valuable because of their high rarity level. Here are more facts about this coin.

Collectors love to go for punched Roosevelt dimes because of the rare error. You’ll see the mistake on the top right part of “D.” If such flaws happen in mints, the coins never go into circulation.

But as for this 1969 dime from the Denver mint, they were lucky enough. Such coins came out in low numbers. So, expect them to have a high rarity level in today’s market.

If you own such a coin, please treasure it well. Besides, if you sell it, expect to make a fortune. Please take a look at more aspects of the coin. 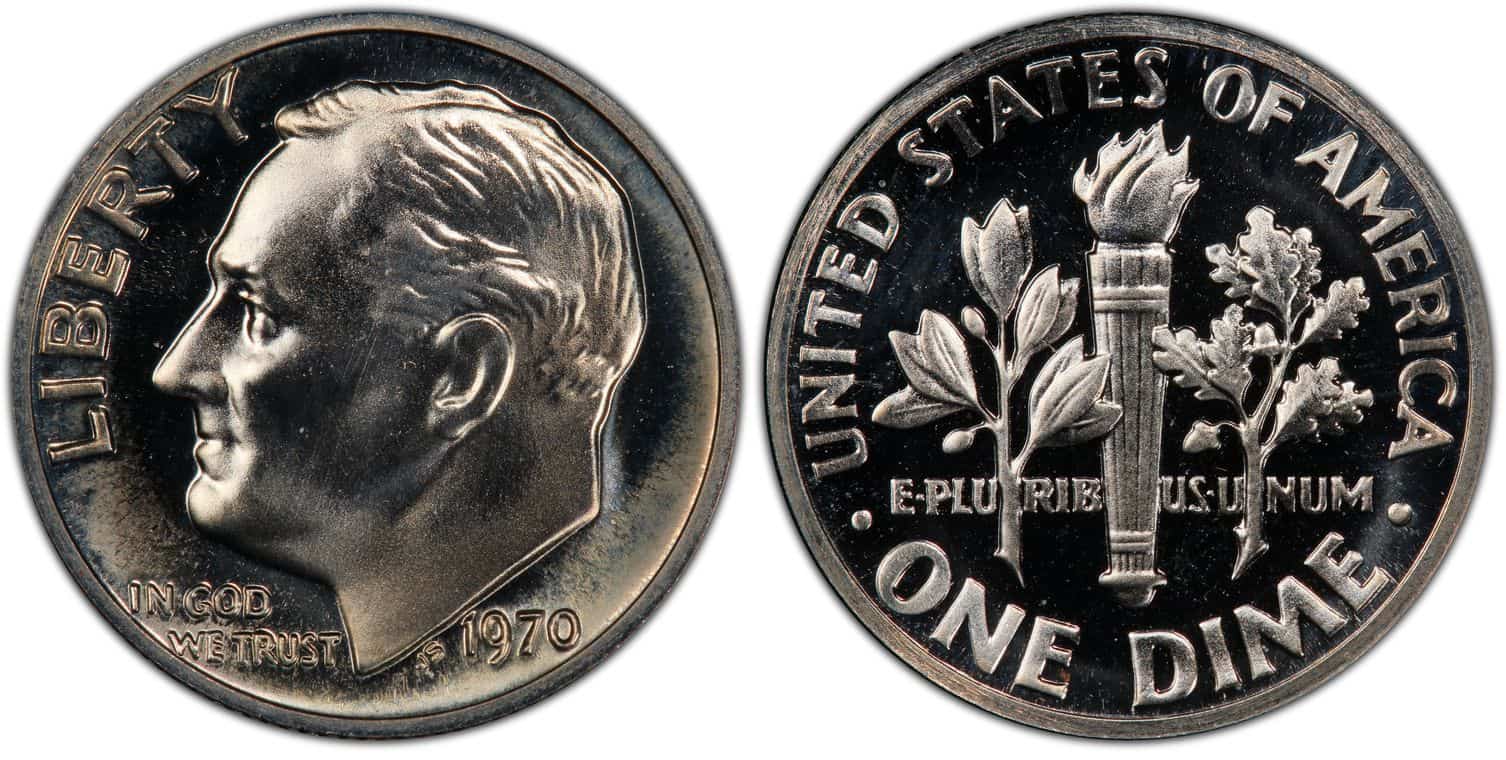 This Roosevelt proof coin is another dime that was quite extraordinary. It’s a gem from the San Francisco mint that the mint struck without its mint mark “S.”.

It’s not easy for such mistakes to happen in mints. If it happens, the mint discards such coins.

But as for this proof dime, it became an exception. That is why it has a high market value.

The mint only made 2000 pieces as collectibles and not for circulation. Expect to get most of them in a crisp state. Here are other interesting facts about the dime.

This Roosevelt dime will also give you a great profit because of its unique error. It’s not easy to find dimes with missing clad layers.

Here, some of the 1969-D dimes have missing clad layers either on the reverse or obverse. Doesn’t that error sound interesting?

Expect most people to go for these coins also because of the rarity. Read on to see more about this coin. 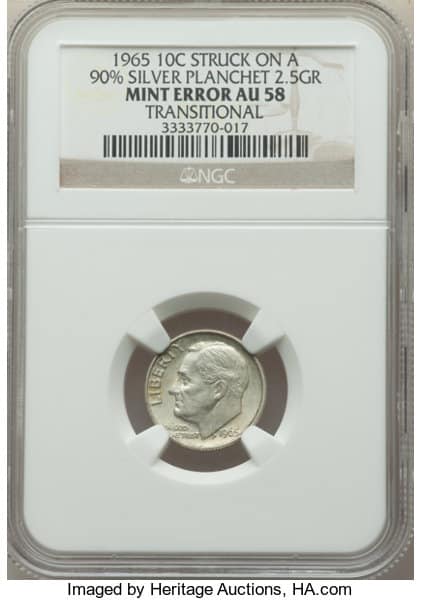 As of 1965, the US mints stopped making Roosevelt dimes using silver. Instead, they began making them using clad metal.

But as for these coins, they became a rare exception by getting a silver body. Collectors who know and are interested in the history of dimes would pay a lot to acquire these dimes.

Also, these coins had no mintmark. So, most collectors presume that the Philadelphia mint struck these error dimes.

The imperfection makes the dime to be one of a kind. Please take a look at more about this coin. 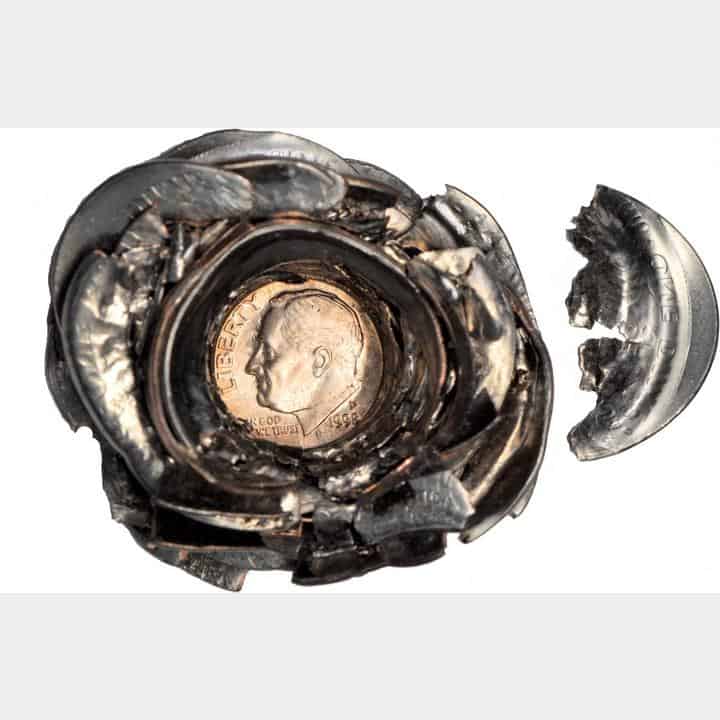 You’ll never get coins with such an error in the coinage history. These dimes are a group of 32 1998 Roosevelt dimes that the mint bonded together due to a challenge at the mint.

But the flaws came during the final touches of the process. The mint workers fed the blank coins into the machines but never ejected them. In the end, all the coins fell into a single stack.

Such an error excites collectors and minors. Why the Philadelphia mint chose to strike the coins in such a manner isn’t clear.

Since it’s rare, expect to pay more to acquire it on your list. The following are more facts about what to know about the coins. 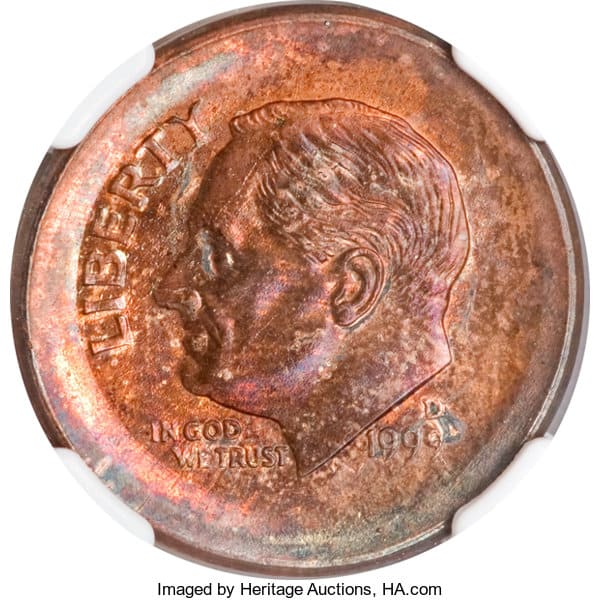 Your first impression of this coin will show you the many errors it carries. It’s these mistakes that draw many collectors to buy it.

Instead of the body color being silver, it’s brown. It shows that the mint struck the coins on a planchet too big for its art. Some of the dime’s details haven’t touched the coin’s edges.

Remember, it’s not easy to get dimes with such mint errors. If you have one, please take good care of it. Also, below are the facts about this dime: 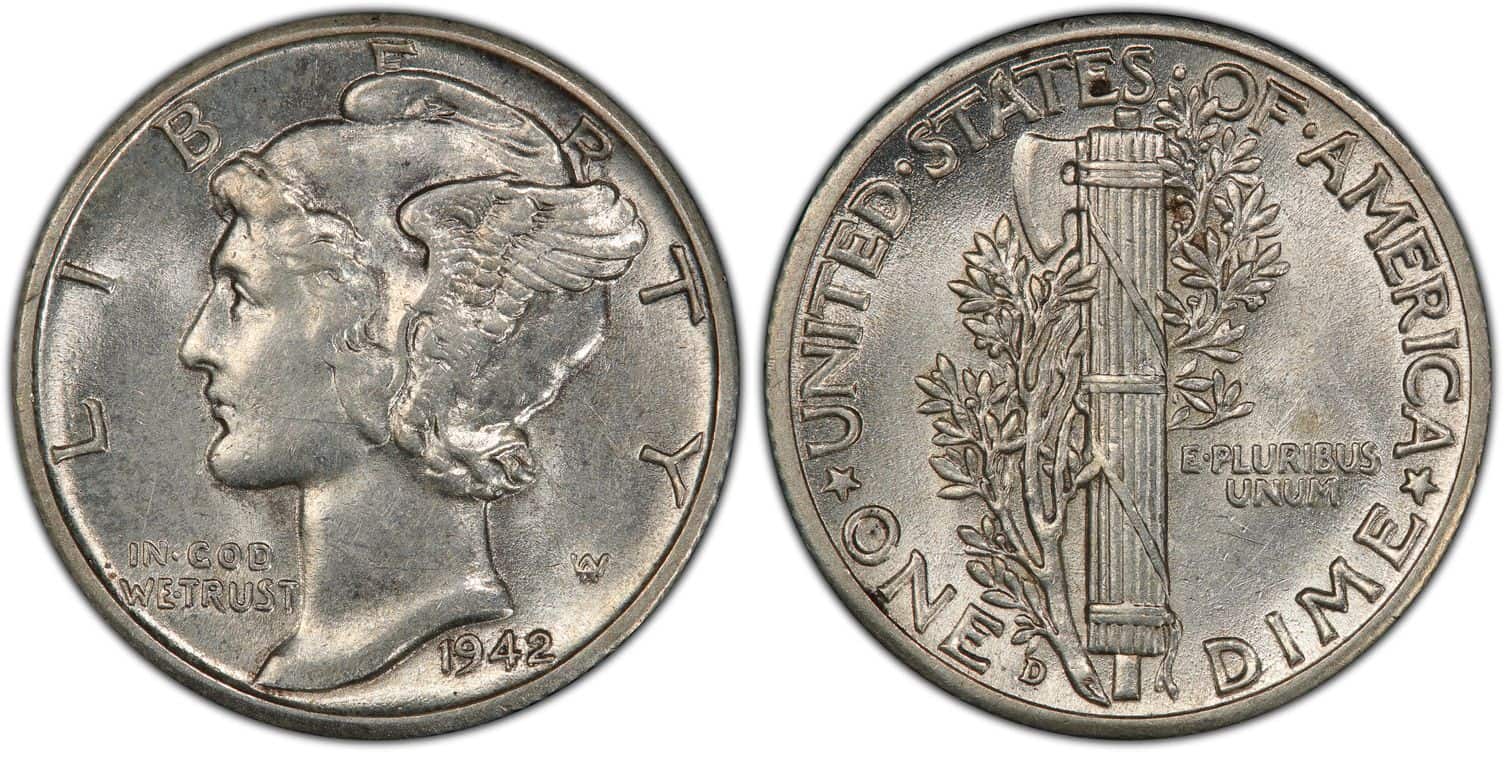 The Denver mint also made the same mistake as the Philadelphia mint when making their 1942 dime. Its workers also placed an overdate of number 2 over number 1.

Number one appears under number two. Most collectors doubt if the errors were intentional. Better still, today, the coin is a great treasure.

This fault is rare because the workers don’t make mistakes in the mints. It’s the rarity of this coin and the error that makes most collectors go for the coin. The following are the other aspects to know about this coin.

Various Roosevelt dimes had different errors ranging at different values. These error coins weren’t supposed to make it out of the mints, but somehow, they did.

The rarity of some of the error coins make collectors pay a lot to get them. Some have double strikes, rim clips, or wrong planchet strikes.

If you get the proof coins with errors, be ready to pay a fortune to acquire them. Ensure you keep such error coins in the best condition if you own them. They might one day save you after you sell them.

So, which error coin dime has excited you the most? Please let us know.

I have a 2023 dime with errors no one knows about

I have a 2000 P Roosevelt dime that the date was stamped over when it was mented and the 2 in the year is the only thing that was not stamped over.Anyone know anything out there let me know .

I have a one of a kind dime I need help with. If anyone has a minute maybe I can show a 2013 P double stamped and miss printed dime I have aquired. In all my research I have not found a dime like this. It is a one of a kind. Any help will be appreciated and compensated. My name is Chad and my number is 7198594326.

Hello I have read most of your information about the coins and impressed me, I have thousands of usa coins how can I go through grading etc thanks.