Rob Paulsen » 1979 Susan B Anthony Dollar Value (How Much Is It Worth Today?)

The 1979 dollar coin is of historical significance given that it is the first United States currency in circulation to bear the profile of a real woman instead of an imagined female figure.

If you wonder whether your 1979 dollar coin is worth anything, you have come to the right place. There are several varieties of the dollar coin, including some interesting errors and proofs.

Like other coins, the 1979 dollar coin value will depend on the coin’s condition and grade. Some rare dollar coins from 1979 can be worth a few hundred dollars.

In this article, you will learn about the history of the 1979 dollar coin, its distinguishing features, numismatic value, and error varieties.

The 1979 dollar coin is also known as the Susan B. Anthony dollar in honor of the women’s rights advocate by the same name.

Aside from wanting to honor Susan B. Anthony, the U.S. Treasury Department hoped to do away with the one-dollar paper note, which only lasted 18 months in circulation yet required so much money to mint compared to coins. The mint boss, Stella Hackel, estimated that the Treasury would save $19 million annually by replacing the dollar notes with smaller coins.

On October 10, 1978, after Congress had approved legislation to issue the Susan B. Anthony dollar, President Jimmy Carter signed it into law.

United States Mint Chief Engraver Frank Gasparro began designing the new coin. His early designs depictED the allegoric Lady of Liberty on the obverse and a soaring eagle on the reverse. However, Congress required the design to feature women’s rights advocate Susan B. Anthony. This move would mark the first time the profile of a real woman appeared on circulating United States currency.

The U.S. Mint produced huge quantities of the new dollar coin in 1979, hoping for a good reception by the public. The Treasury assumed the public would appreciate a smaller-sized dollar coin, a break from the larger Eisenhower coin. A total of 433,613,944 1979 dollar coins were minted that year between the Philadelphia, Denver, and San Francisco mints.

However, the new small-sized dollar coin was not as popular as the Treasury Department had hoped. There were numerous complaints that the new coin looked too similar to the quarter dollar, which was equally small. The paper dollar was still in circulation, and people were more familiar with it.

The poor reception saw a sharp decline in the production of the Susan B. Anthony dollar in consecutive years. By 1981, the coins were only struck for collector sets, and none were made for circulation. The next time the dollar coins would be struck was in 1999, after requests from the U.S. Postal Service. The 18-year hiatus was the longest production gap in U.S. coinage history.

Features of the 1979 Dollar Coin

In this section, we will look at the unique features of the 1979 dollar coin. The Susan B. Anthony dollar coin is easy to identify because it is so different from other U.S. coins. Here’s what to look for:

The Obverse of 1979 Dollar Coin 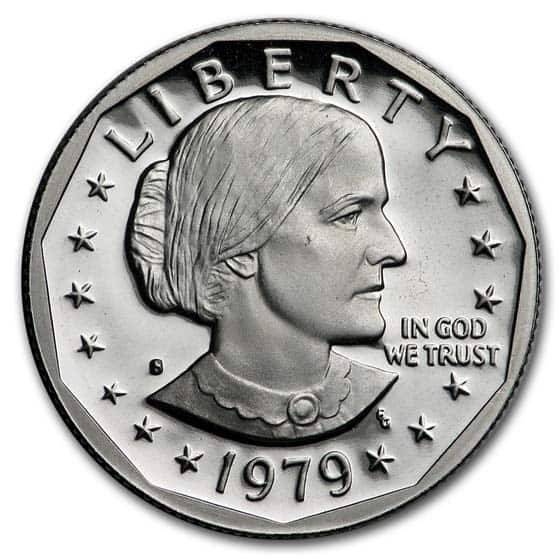 Stars are stamped around the coin’s edge. The coin’s inner rim is shaped as an 11-sided polygon while the edges are reeded.

The mint mark is above the lady’s shoulder on the left side of the coin. The 1979 dollar coins were minted at the Denver, Philadelphia, and San Francisco mints and will have the mint marks D, P, or S, respectively, depending on where the coin was minted.

The Reverse of the 1979 Dollar Coin 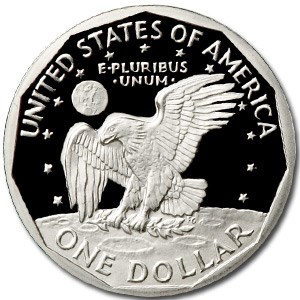 On the reverse or back of the 1979 dollar coin is a left-facing eagle holding a laurel in its talons. The bird’s wings are spread out as it lands on the moon, a symbolic representation of the Apollo 11 mission’s moon landing.

Above the eagle’s bald head, you will notice Earth in the background with the map of North America inscribed.

Above and around the coin’s edge, the words UNITED STATES OF AMERICA are inscribed while the Latin phrase, E PLURIBUS UNUM, is stamped below in a smaller font.

Other Features of the 1979 Dollar Coin

Each coin weighs 8.1 grams and is 26.5mm in diameter. It is worth noting that the diameter is quite close to the quarter dollar’s 24.3mm and a half dollar’s 30.6mm; this similarity is cited as the reason the 1979 dollar coin was not well received by the public.

Here are the types of 1979 dollar coins you should familiarize yourself with: 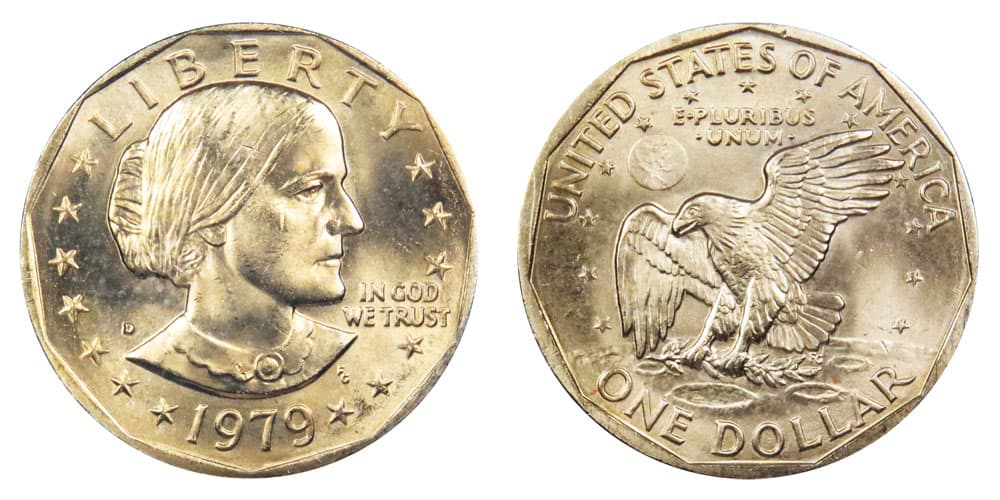 The 1979-D dollar coins were minted in Denver and will therefore have the D mintmark just above Anthony’s right shoulder or on the left side of the coin.

According to numismatic services, the 1979-D silver dollar has the lowest value. This could be because the coins minted here are ordinary with no varieties or errors.

The 1979-S dollar coin is the business variety minted at the San Francisco facility and will feature the S mint mark right above Anthony’s right shoulder.

Typically, coins printed at this facility are proof-only. However, in 1979, the Treasury put the business variety dollar into circulation, although it is possible to still come across the rare brilliant uncirculated coin in mint sets. 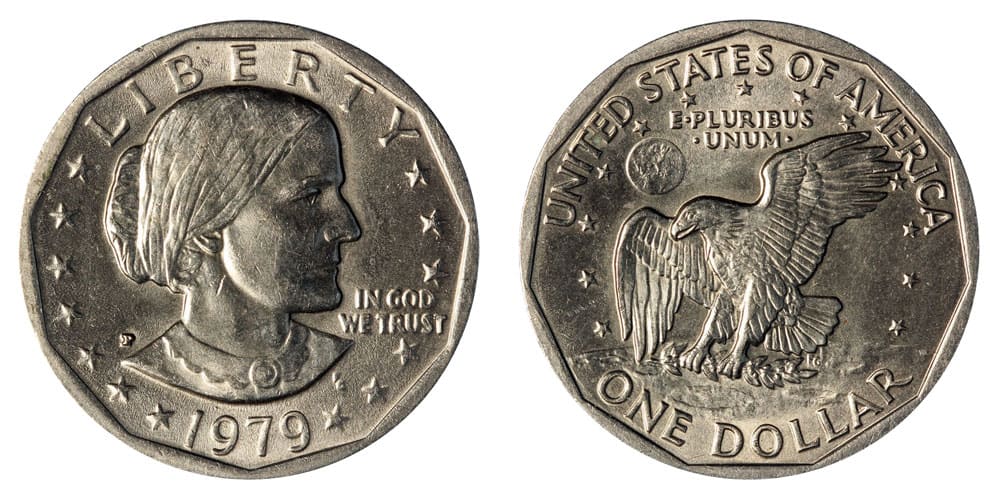 The Philadelphia mint produced two planchets in 1979, resulting in two coins with different obverse dies. The first coin has a wide rim, so the date (1979) is stamped unusually close to the outer rim.

Also known as a near date, these coins were only struck at the Philadelphia mint. Susan B. Anthony coins from the Denver and San Francisco mints dot have the wide rim variety.

The U.S. Mint produced a collector set of the Susan B. Anthony dollar. Several of these sets contained the 1979 wide rim variation, although these are considerably scarce and valued at a premium.

Circulated 1979-P wide-rim coins are valued at between $6 and $10, depending on the coin’s condition. Rare uncirculated ones are worth $67. 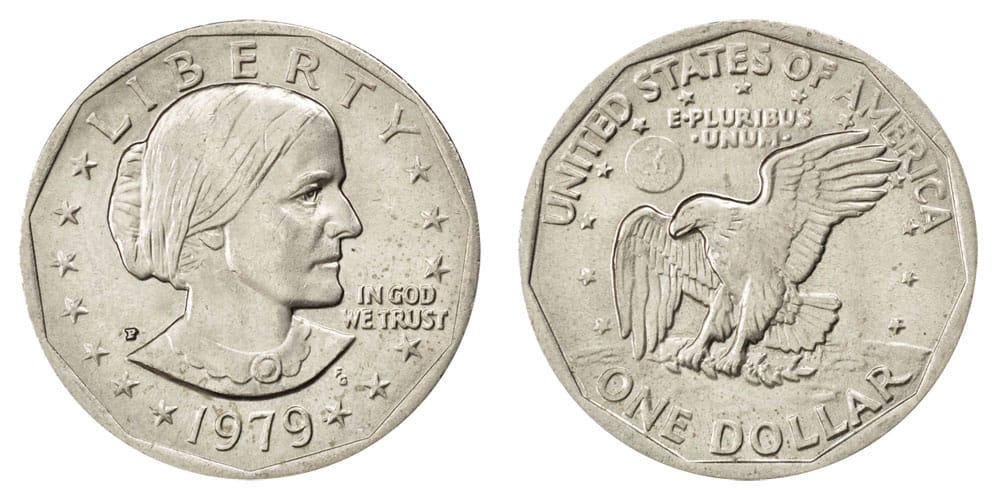 The second coin minted from the two different planchets is the narrow rim 1979-P dollar.

The coin features a thin, narrow rim and the year of issue (1979) is placed further away from the rime compared to the Near Date variety.

The narrow rim variety was only produced at the Philadelphia mint and featured the P mint mark. Even in uncirculated condition, this variety is far less valuable than the near-date variety. 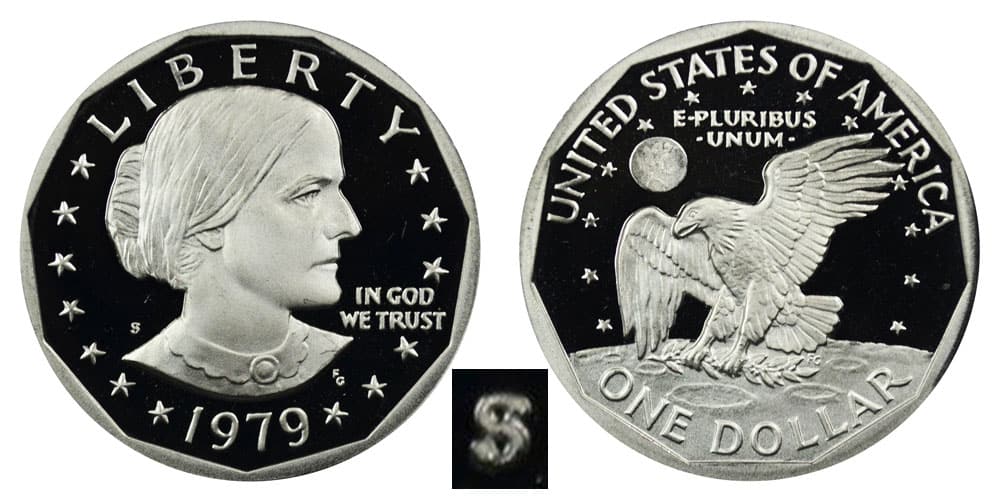 At the San Francisco mint, the facility used an old die that resulted in an unclear mint mark on the 1979 dollar coin. Coin grading companies refer to this variety as the 1979-S proof type 1. We will discuss this proof variety below as it is considered an error coin.

The mint later replaced the old die with a new one which struck a clearer S mint mark. The mint mark depicts clear serifs at the top and bottom of the S.

The number of these Susan B. Anthony type 2 proofs available is unknown, but the coins are less common and more valuable than the Type 1 proofs.

The 1979 dollar series had one error coin: The 1979-S proof type 1. Specifically, this coin has a blob error, also known as a cud error.

A blob coin error happens when the striking die is worn out. In the past, mint operators would use coin dies until the die was completely worn out. Making new dies was expensive, and the operators had to prolong the life of the die as far as possible.

The massive pressure involved in minting coins, coupled with the continuous striking of the planchet, can damage the die over time, resulting in blob errors.

The 1979-S proof type 1 dollar is an error coin because it has a blob error on the mint mark. An old, worn die struck the first coins made at the San Francisco mint that year.

At the time, mint marks were still being struck by hand into the die. The punch used to strike the mintmark onto the die during the 1979 dollar production was worn out. The result was a blurry S mintmark.

The S mintmark on these proof coins seems filled in. The serifs at the top and bottom of the S are invisible.

As the production run ended in 1979, the minting facility made a new punch to make the 1979-S proof type 2 coins. As mentioned, these had a clearer S mint mark.

The 1979-S proof type 1 is more common than the type 2 variety and therefore has a lower numismatic value. This coin is only available as proof and is worth $7.88. You can learn more about the value of Susan B. Anthony error coins so you can identify rare and high value varieties.

Are there any valuable Susan B. Anthony dollars?

Most Susan B. Anthony coins are worth their face value since they are circulated or have low mintage grades. The 1979 dollar proof sets are worth a bit more at $67.These proof coins from the San Francisco mint are uncirculated, which explains their slightly higher value than the other varieties in the same year.