Rob Paulsen » 1971 Liberty Silver Dollar Value: How Much is it Worth Today?

The first official American Dollar was a note, not a coin. It was known as a Silver Certificate, and even today, $1 coins are unpopular because people prefer $1 bills. But early silver dollars earn premium prices at auctions, so they’re still worth exploring, if only for their melt value.

In 1971, Eisenhower Dollars were produced in both silver and clad (cupronickel) versions. The silver $1 variants contained 40% silver and 60% copper and came from San Francisco. Let’s do the math and dig into the facts to conclusively confirm the 1971 Silver Dollar Value.

History of the 1971 Silver Dollar

The US began minting $1 in 1794, and over the years, these coins have come in both specie (gold and silver) and base metal (copper, tin, zinc, etc.) The US also has golden dollars, which are different from gold dollars because they have no gold content, just the color. These golden dollars include Sacagawea, American Innovation, and Presidential $1 coins.

From 1794 to 1971, silver $1 coins bore Lady Liberty as their device. The device is the portrait or image on a coin, while the background of the coin is called the field. Several ladies posed as the Goddess of Liberty, and she was depicted in various iterations and poses including Flowing Hair (from 1794), Draped Bust (from 1795), and Seated Liberty designs (from 1836).

While gold is generally more valuable than silver, there were certain seasons when silver currency made more sense. Early on, $1 were coins exported, melted, and brought back as bullion. And in the 1850s, the gold rush made a silver $1 more valuable than a gold $1, so the coin export business resumed. Finally, in the 1960s, silver prices led to massive hoarding.

This is sometimes called silver stacking because citizens can later re-sell the coins for their melt value, so these $1 coins are a convenient form of bullion. To control the coin shortage, the mint introduced $1 in base metals, beginning with the Eisenhower Dollar in 1971. Its pure copper core was coated with 75% copper and 25% nickel to mimic the silver sheen.

This brought the overall metal composition to 91.67% copper and 8.33% nickel. But the coins were unpopular and only lasted until 1978 since people felt they were too big. The next $1 coin was the Susan B. Anthony $1, and that one got rejected for being too small. Seems the US has a goldilocks problem with its $1 coins, and as it turns out, only the $1 bill is just right!

Starting in 1873, American $1 coins were 90% silver and 10% copper. These Trade Dollars were coined to compete favorably with silver $1 from other countries. They were mainly used for trade with Asia, so you’ll often spot Asian counter-stamps on them. Chinese traders placed these holes or chop marks on the silver American $1 coins to verify their authenticity.

As we mentioned, the public felt Morgan, Peace, and Eisenhower $1 were too big while Susan B. Anthony $1 was too small, so they were seen as inconvenient for everyday trade. You can find both coins in fairly good grades since they mostly lived in bank vaults. And since nobody used them locally, the mint stopped making new $1 until 1921 to 1928, then in 1934 to 1935.

In 1962, a few rare $1 years were found in holiday coin bags – people often ordered $1 coins as Christmas presents. These rarities made citizens rush to the bank with silver certificates, redeeming them for $1,000 in $1 coins. They sifted through coin rolls seeking treasures to resell. Due to the resulting shortage, the mint officially stopped redeeming silver certificates.

In 1965, about 300K silver dollars were made for use in casinos, but they never circulated and were allegedly melted by the mint. Congress also passed the Coinage Act, forbidding the mintage of new $1 silver coins for five years, and setting their metal mix at 40% silver to reduce the melt value of the coin. This was intended to deter silver stacking by coin hoarders.

The Fuss About the Eisenhower Dollar

At the time, the melt value of silver meant a 90% silver $1 coin was now worth $1.29, and as hoarding continued, the final silver certificate redemption was slotted for 1968. In 1969, talks began to resume minting $1 coins. Dwight Eisenhower was the 34th President of the United States, and he died in March 1969, so he was a logical contender for the new $1 coin.

While the 1971 Dollar was meant to be silverless, some congressmen felt the base metal composition was an affront to Ike. Also, his widow, Mamie Eisenhower, wrote to congress saying how Ike had loved silver dollars, often gave them out as gifts, and actively collected silver dollars minted in 1890, the year he was born. So Congress allowed those 40% silver $1.

Since no $1 coins were minted after 1935, the 1971 Eisenhower Dollar was expected to draw attention. The coin came in two versions – silver and clad. The Silver Eisenhower $1 is 40% silver and 60% copper while the clad base metal $1 is 91.67% copper and 8.33% nickel. The clad version was for circulation since the melt value of base metals was lower than silver.

But the silver variant was targeted at numismatists, who were less likely to melt down or hoard their $1 coins. The 1971 Silver Dollar was only minted in San Francisco, but the mint had lots of Silver $1 from other years. In 1973, the Mint tried selling this stock of 3M silver $1 to the public. But they wouldn’t bite and sales trickled until 1980 when the final set was sold.

From Day One, most people preferred Spanish $1 coins to American ones. And since $1 coins have never circulated except as Christmas gifts, the mint stopped making them for public use on 11th December 2011. The mint still issues collector’s coins though, and you can buy $1 coin rolls from the bank to look for rarities, treasures, and errors among earlier circulated coins.

Features of the 1971 Silver Dollar

Since the 1971 Silver Dollar was aimed at collectors, you’d assume they were all proof coins. But some are graded as PR while others are designated PF (proof-like) or MS (mint state). This is because the earliest batches were non-proof coins sold for $3 in blue envelopes (aka Blue Ikes) while the proofs were priced at $10 and sold in brown boxes (aka Brown Ikes).

The Obverse of the 1971 Silver Dollar 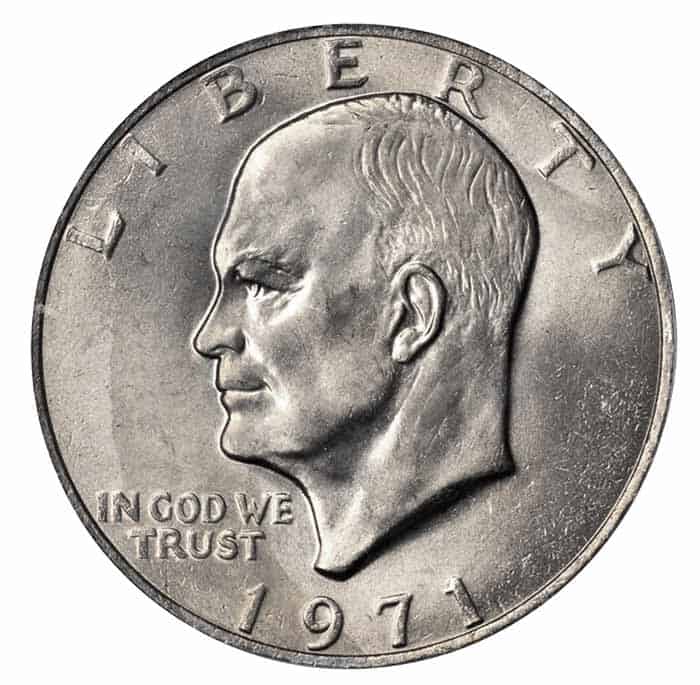 The obverse (heads side) of the 1971 Silver Dollar has a portrait of Dwight Eisenhower facing left, with Liberty on the upper collar and the mint date on the lower collar. The mint mark is above the date, slightly below his neck. The legend In God We Trust is in front of his face. Both sides were designed by Frank Gasparro. His subtle FG is hidden at the neckline cut-off.

The Reverse of the 1971 Silver Dollar

The reverse (tails side) of the 1971 Silver Dollar bears the insignia of Apollo 11, America’s 1969 Moon Landing Mission. The symbol is an eagle landing on the moon with an olive branch in its talons and its wings partially spread. The eagle has 13 stars arranged around it. It also has a few moon craters below its feet and the Earth in the background above its head.

The upper collar reads United States of America with E Pluribus Unum on the upper right of the Earth. The lower collar reads One Dollar. FG (Frank Gasparro) sits just under the eagle’s tail. This reverse design was developed from the mission patch that the astronauts wore on their lunar mission. The patch was designed by Michael Collins, an Apollo 11 crew member.

Other Features of the 1971 Silver Dollar

This makes a total mix of 60% copper and 40% silver. Some 1971 Silver Dollars were proof coins, meaning they were coined on a special planchet (the blank discs that coins are minted on). Proof planchets are burnished before minting to guarantee the mirror-like cameo finish.

Less shiny proofs are graded as D-CAM or deep cameo. The dies are also treated with special chemicals to enhance the clarity of the design. 1971 Silver Dollars were sold by mail from 1st July to 8th October 1971 and were posted on October 17th 1971, Ike Eisenhower’s birthday.

While over 120M $1 coins were minted in 1971, only about 4M of them were proofs while about 7M were uncirculated. The silver dollars were only coined in San Francisco while other mints produced clad cupronickel dollars. This difference in mintage and the melt value of silver sets the premium price for Silver Ike Dollars. Let’s verify the 1971 Silver Dollar Value.

Verified errors can greatly add to the value of a coin. But these flaws may have to be graded and listed to ensure they’re not counterfeited mistakes! Let’s look at a few valuable errors on the 1971 Silver Dollar, sometimes called the Ike Dollar because that was Eisenhower’s nickname.

Coins are sometimes graded as PF instead of PR, meaning they’re proof-like in quality rather than verified proofs. PF could also mean they were graded by ANACS (American Numismatic Association Certification Service). The ANACS system uses the PF code for its proof coins.

The error on this coin is a double strike with a slight off-set. This means the planchet shifted a little to the left between strikes, so you can see an extra ‘We’ on Ike’s neck and a shadowy silhouette around his head and chin. In PF 63, this silver dollar sold for more than $4,000. 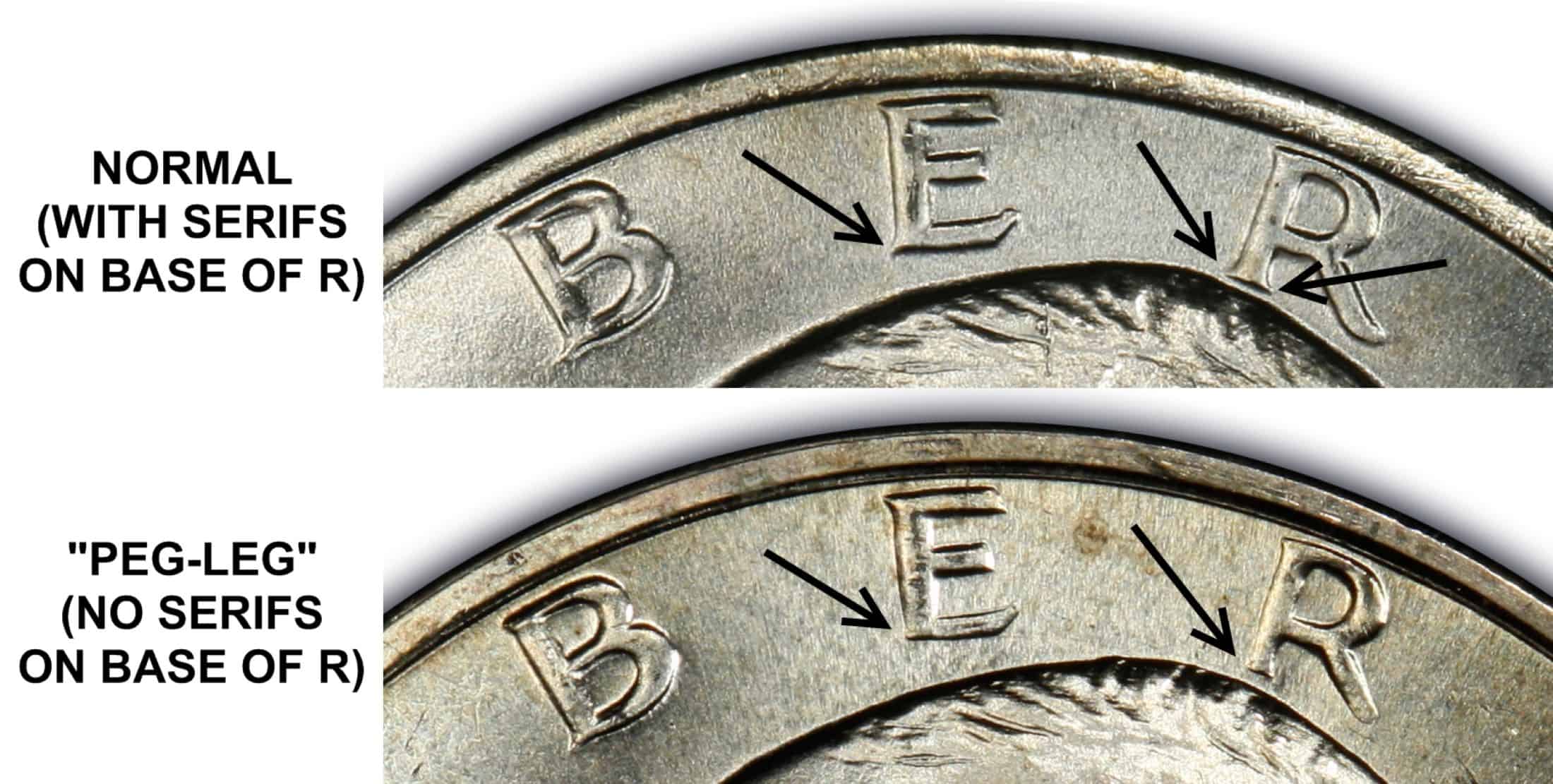 To make a coin, the mint will first produce a master hub, which makes a master die, which then makes a working hub, and that’s used to make working dies. It’s these working dies that mint coins, and if they’re flawed, they can produce a batch or variety of identical error coins.

Mint workers will sometimes spot die errors and try to fix them. The peg leg is a shortened R in Liberty and probably resulted from over-polishing the die to remove a blemish. In MS 66, a peg leg error sells for about $500. This one isn’t graded as a proof, so it’s likely a Blue Ike.

DDR means double die reverse. It happens if the die used for the back of the coin (aka the tails side) shifts while it’s being struck by the hub. This leads to doubling, and can sometimes cause tripling or quadrupling, depending on how many times the die or planchet was struck.

Doubling is often clearest on the letters and numbers. On this coin, you can see doubling on the words America, Pluribus, and on the stars. This 1971 Silver Dollar in PR 69 D-CAM is in near-perfect condition. (PR 70 and MS 70 are the highest grades.) It sold for over $9,000.

Before 1990, mint marks were placed manually with a hand-held punch. You can sometimes see a blurring, doubling, or tripling on the mint mark if the coin shifted between strikes. It can be the same mint mark e.g. S/S or a mixed mark e.g. D/S for movement between mints.

This error is called an RPM or re-punched mint mark. On this 1971 Silver Dollar, the S/S adds to the price of this already valuable MS 67 coin. It’s not graded as a proof coin, but it has that clarity of detail and is likely one of the $3 collector’s coins. It’s worth over $8,000.

After this, the die treatment starts to fade. The mirror-finish gets less and less distinct, but if the coin still shows a strong contrast between the reflective field and the frosted device, it’ll be graded as a deep cameo or a D-CAM. This PR 67 D-CAM error coin sold for over $1,400.

FAQs About the 1971 Silver Dollar

What makes a 1971 Silver Dollar Rare?

Out of the 125M Ike Dollars minted in 1971, barely 11M were 40% silver dollars. And very few of these coins entered circulation because many were hoarded and/or later melted for bullion. All the others were clad coins, and this low mintage number makes them quite rare.

Check the mint mark. In 1971, Silver Dollars were only made at the San Francisco Mint while the other mints made clad coins. Look for the S mint mark on the obverse, in the space above the date. Next, check the edges. Clad coins are prone to corrosion, so you might see traces of exposed copper where the nickel coating has worn off. Silver dollars retain their silver edge.