The 1953 $2 bill value is relatively low, although this banknote with Thomas Jefferson’s portrait on the front page is rare in circulation. In most cases, the reason is superstitious, and Americans often use the term Dirty Tom when talking about it.

To make things even weirder, many vending machines, money-changing machines, and electronic cash registers don’t accept these banknotes at all. On the other hand, their printing is cheaper than $1 banknotes, so they are occasionally produced and released into circulation.

The first $2 bill was printed on 29th November 1775, during the first year of the American Revolutionary War. Then, the Bureau of engraving and printing started producing $2 Bills as Legal Tender notes from 1862 to 1966. However, they were replaced with modern Federal Reserve Notes in 1976.

Besides, its design was slightly changed, and you can notice a smaller treasury seal moved to the right. However, these notes were still without the IN GOD WE TRUST that became mandatory in 1963.

You can often hear that Americans nicknamed this bill Tom because of Jefferson’s portrait. However, it is also known as Dirty Tom because of its connection with election rigging, prostitution, bribery, and gambling. Most people also consider it bad luck because of the deuce.

Unlike older versions with silver certificates with a redeemable amount in silver coins, banknotes printed in 1953 came without such certificates. On the other hand, these bills came with a red seal.

This seal type allowed the government to raise funds during the Civil War without redeeming them for silver. In other words, Legal Tender notes were a kind of loan to the government.

The modern small-size $2 bills with that seal, including those printed in 1953, are only money. It was impossible to replace them with silver, although the US was still on a silver standard that year.

The 1953 $2 bill is a Legal Tender note, and the second one with a smaller size. You can recognize four series produced from 2nd May 1953 to 7th November 1963, but all have the same design besides the treasury secretary and treasurer’s signatures. 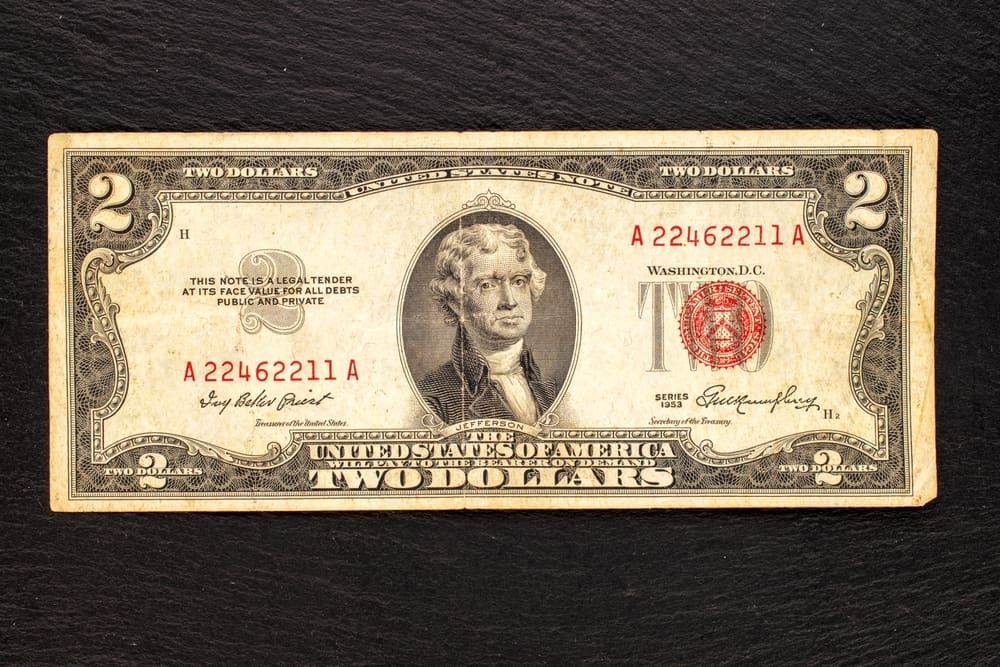 The 1953 $2 bill has the 3rd American President, Thomas Jefferson, placed on the front page. Besides the red seal and the secretary’s signature on the right, you can notice the treasurer’s signature on the left below the number 2.

The inscription UNITED STATES NOTE and denomination TWO DOLLARS are placed below the centrally positioned portrait. 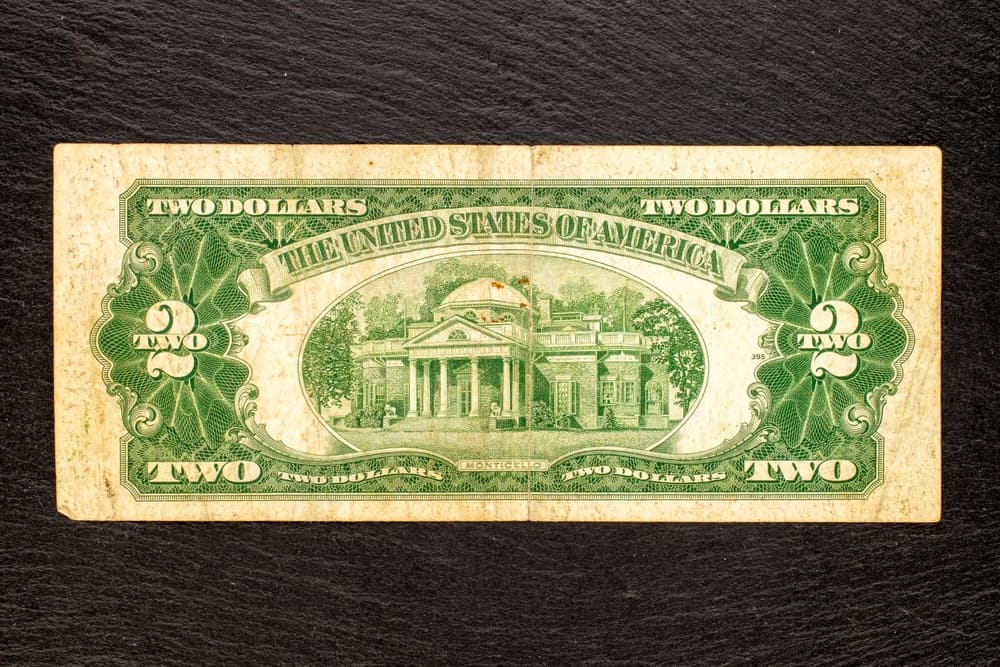 The beautiful 1953 $2 back page includes centrally positioned Jefferson’s home, Monticello, with an inscription, THE UNITED STATES OF AMERICA, above. A house name MONTICELLO is under the building, and the denomination TWO DOLLARS is written twice on both bill sides.

Besides a red seal and required signatures, you will recognize a specific printing, paper quality, and texture.

This banknote contains two seals on the front page. You can see the black Federal Reserve bank one on the left and the red treasury seal on the right.

Each 1953 $2 bill has a serial number with eight numbers and two letters at the beginning and end of the line. Only two letters are forbidden to use for this purpose:

Each banknote has two identical serial numbers, but sometimes one digit is altered, making this note valuable and collectible. You can sometimes see a star instead of the second letter when the banknotes are replaced for some reason.

Many collectors look for 1953 $2 bills with unique numbers, like those with:

Banknotes with these combinations typically cost more than regular ones.

The 1953 $2 bill with a red seal has two signatures on the front page, but their combination depends on the type:

The interesting thing about US banknotes is the specific printing type and texture. Only original bills have a recognizable raised printing that is impossible to counterfeit. You can feel it under a finger while moving it along the surface.

This Legal Tender note is made of cotton and linen in a 75%: 25% ratio. Security fibers are added as an additional measure of protection against possible counterfeiting. 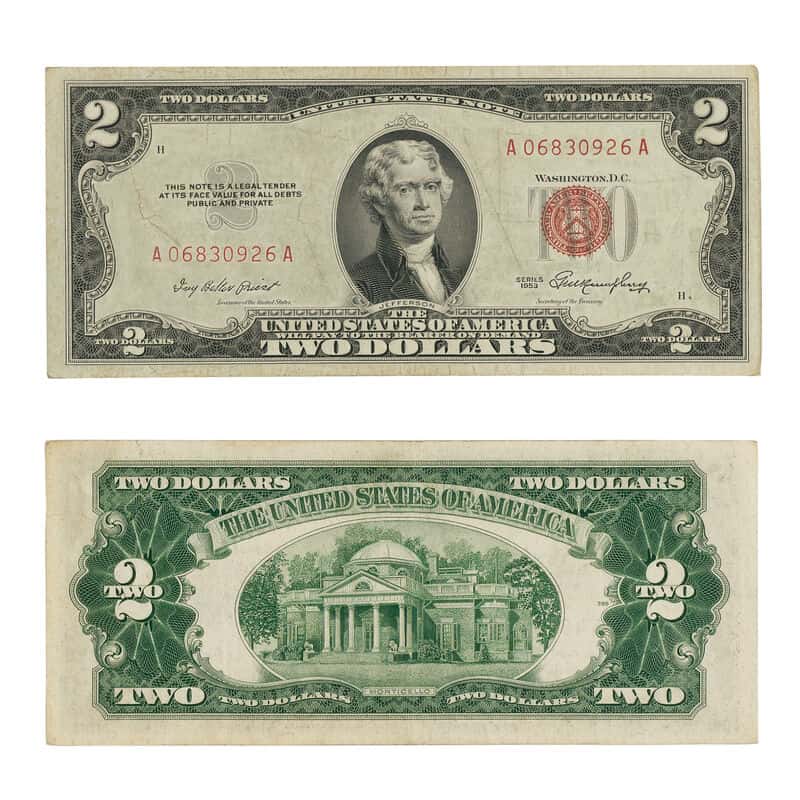 Believe it or not, $2 bills are the rarest currency denomination in the US, accounting for less than 0.001% of American currency in circulation. It is estimated that approximately 1.2 billion of these banknotes are in use, or ten times less than $1 bills.

However, even such a low number was the American banking system’s nightmare. Americans hated and avoided these banknotes, and they never widely circulated.

Even today, there is no place for them in most cash drawers, and you can’t use them in some electronic cash registers, vending machines, and money-changing machines.

However, some collectors appreciate $2 bills and specialize in collecting them. All four 1953 $2 bill series are valuable to their collections.

Since millions of 1953 $2 bills with a red seal were printed, they are not rare, meaning their price is low. Their value typically depends on a few significant factors, including:

The rule of thumb is that older banknotes in an uncirculated condition are the most expensive and cost $15 to $30. The price also depends on the serial number, so pieces with rare and unusual combinations will cost more.

For instance, you can expect up to $90 for a banknote with a star, while notes with rare serial numbers can bring you a few hundred dollars. On the other hand, standard $2 bills that spent some time in circulation are worth less than $10.

Most Americans know this banknote as the Dirty Tom or Whore Note and avoid it because of its bad reputation. You can find several reasons for such an attitude referring to its use in the past, like:

Despite persistent efforts to use this banknote in circulation and attempts to use it to pay salaries to civil servants and military members, the matter has not changed.

The newest problem with this banknote occurred in 2016 when one girl was questioned after using a $2 bill to pay for lunch in school.

It was a traumatic experience for the eighth-grade student because people knew almost nothing about this banknote. Finally, consulting the bank was necessary to finish that ugly episode after the bill’s authenticity verification.

Nowadays, it is the only non-redesigned US bill because even counterfeiters avoid mashing with it.

It is pretty challenging to find 1953 $2 bill errors because of strict control during printing and low production.

There is only a slight chance of coming across misprinted bills. The rule of thumb is that those rare banknotes are always more attractive, collectible, and expensive when the error is more dramatic. Such misprints typically affect serial numbers, seals, orientations, and cuts.

Nothing. There are no rare two-dollar banknotes among those printed in 1953. However, misprinted bills and those with a unique serial number or a star are rarer than others and can be worth more money.

Unfortunately, you can’t find the 1953 $2 bill that costs a lot of money. However, you will get a premium of about $90 for those with a star (★) in a serial number.

The 1953 $2 bill value primarily depends on its condition. Most pieces used for circulation cost less than $10, but uncirculated banknotes come in a price range of $20 to $30.

What is the rarest $2 bill?

The rarest and most expensive $2 bills are large-size banknotes issued from 1862 to 1918. Those in uncirculated condition are collectible and can be worth more than $10,000.