If you’ve found a 1944 quarter in your pocket change, you might be wondering if it’s valuable. If so, you’ve come to the right place!

We’re going to investigate the 1944 quarter value, and what separates rare coins from the rest. And we’ll find out more about its design and history as we go.

History of the 1944 Quarter

The quarter minted in 1944 is known as a Washington quarter. It’s one of a long series – they were first struck way back in 1932 and continue to be made today.

The coin was originally launched to celebrate 200 years since the birth of George Washington, the first president of the USA. His image is shown on the obverse (the “heads” side), hence the nickname of Washington quarters.

The 1944 coin is made of the same materials as the first ever Washington quarters, i.e. 90 per cent silver. 10 per cent copper was added into the mix to give the coin more strength.

The recipe stayed the same until 1965, when the rising silver price was causing problems. Not only were the coins becoming more expensive to produce, people were starting to hoard them. Soon, it was conjectured, the silver content might be worth more than the face value of the coin.

It wasn’t just the quarter that was faced with this problem. The same applied to the dime. And in 1965, silver coins were replaced with coins made of copper. The surfaces of the new coins were coated in an alloy of nickel and copper so they still looked silver.

It isn’t just the composition that differs between 1944 quarters and those produced after 1965. Some subtle changes were made to the design too. From 1965, the areas of highest relief were made lower. That made it possible to capture all the detail of the design in the new, harder coin.

A huge number of quarters were struck in 1944 – well over 132 million. That makes it the highest mintage of any Washington quarter in the first three decades of production. (It isn’t the most common in top condition, though.)

Features of the 1944 Quarter

The Obverse of the 1944 Quarter 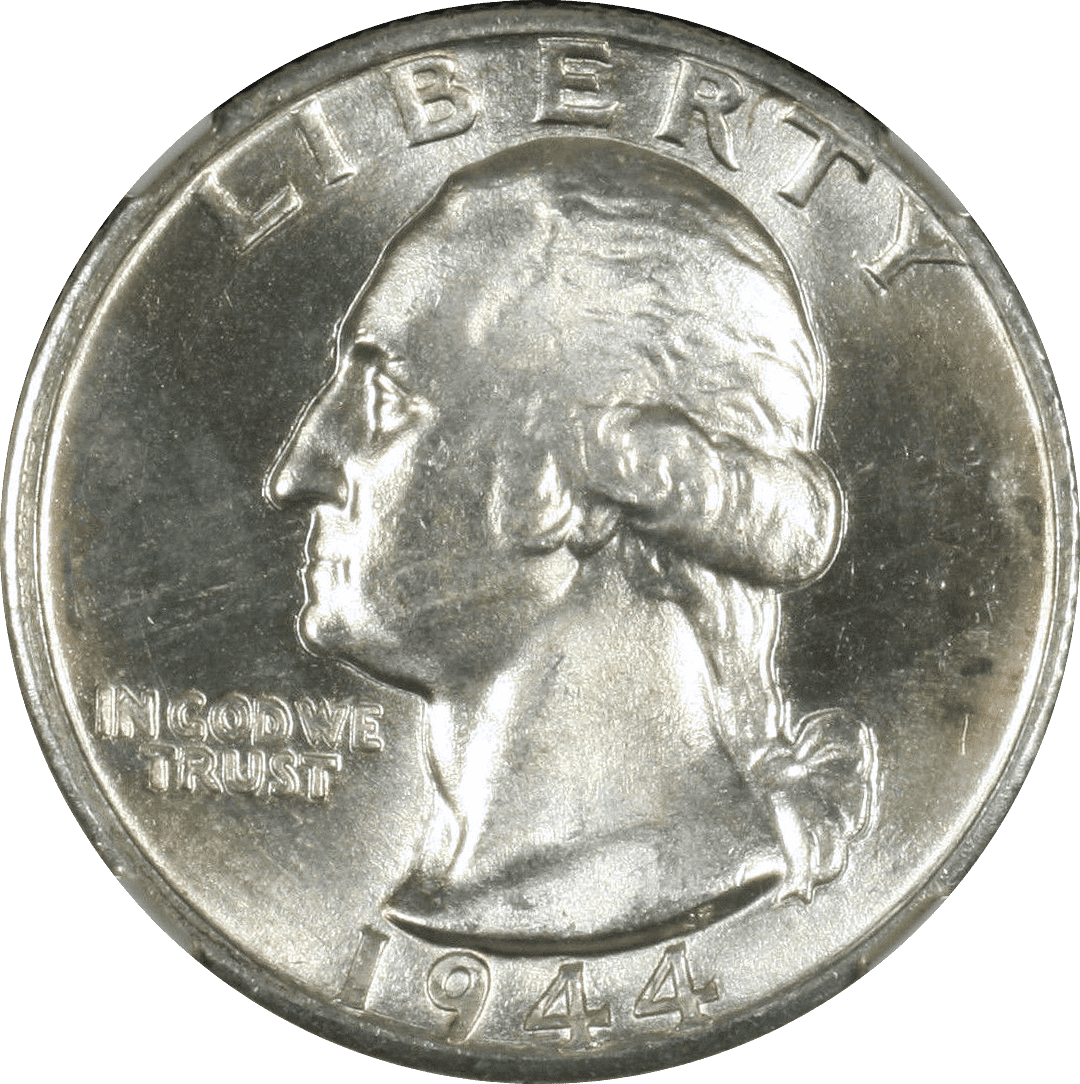 The obverse of the 1944 quarter is what gives it the nickname of the “Washington quarter”. It shows the first president of the USA, George Washington.

The portrait is the work of John Flanagan, who depicted Washington in profile facing left. Only his head and shoulders are shown.

The selection of Flanagan’s portrait for the coin attracted some controversy, both at the time and in later years.

The original idea for a coin commemorating the bicentenary of Washington’s birth was that it would be a half-dollar. And it was to be struck only in the bicentennial year, 1932. But it was later decided that a quarter should be used instead, and Washington’s head should appear on it permanently.

An image of Washington had already been selected for the half-dollar coin. It was by an artist called Laura Gardin Fraser, and it had been chosen by a committee set up to oversee the bicentennial celebrations.

But as the new coin would be a permanent change, it was for the Treasury to decide what image to use. They launched a competition, stating that the Washington portrait had to be based on a bust by the French sculptor Jean Antoine Houdon.

The committee thought this was good news: Fraser’s portrait had been based on that bust. (Houdon’s sculpture was considered the definitive depiction of Washington.) It was therefore resubmitted as part of the competition.

But despite protests from the bicentennial committee, the Treasury Secretary, Andrew W. Mellon, preferred Flanagan’s portrait. Mellon was succeeded by a new Treasury Secretary, Ogden L. Mills, before the coins were launched. The committee asked him to reopen the decision, but he refused.

So in 1932, and for all the years since, it’s been Flanagan’s portrait that’s appeared on the quarter. Look closely and you’ll see his initials, “JF”, tucked discreetly at the lower edge of Washington’s neck.

The bust of Washington is surmounted with the word “Liberty”, and the motto “In God We Trust” appears on his left. The date is at the bottom.

The Reverse of the 1944 Quarter 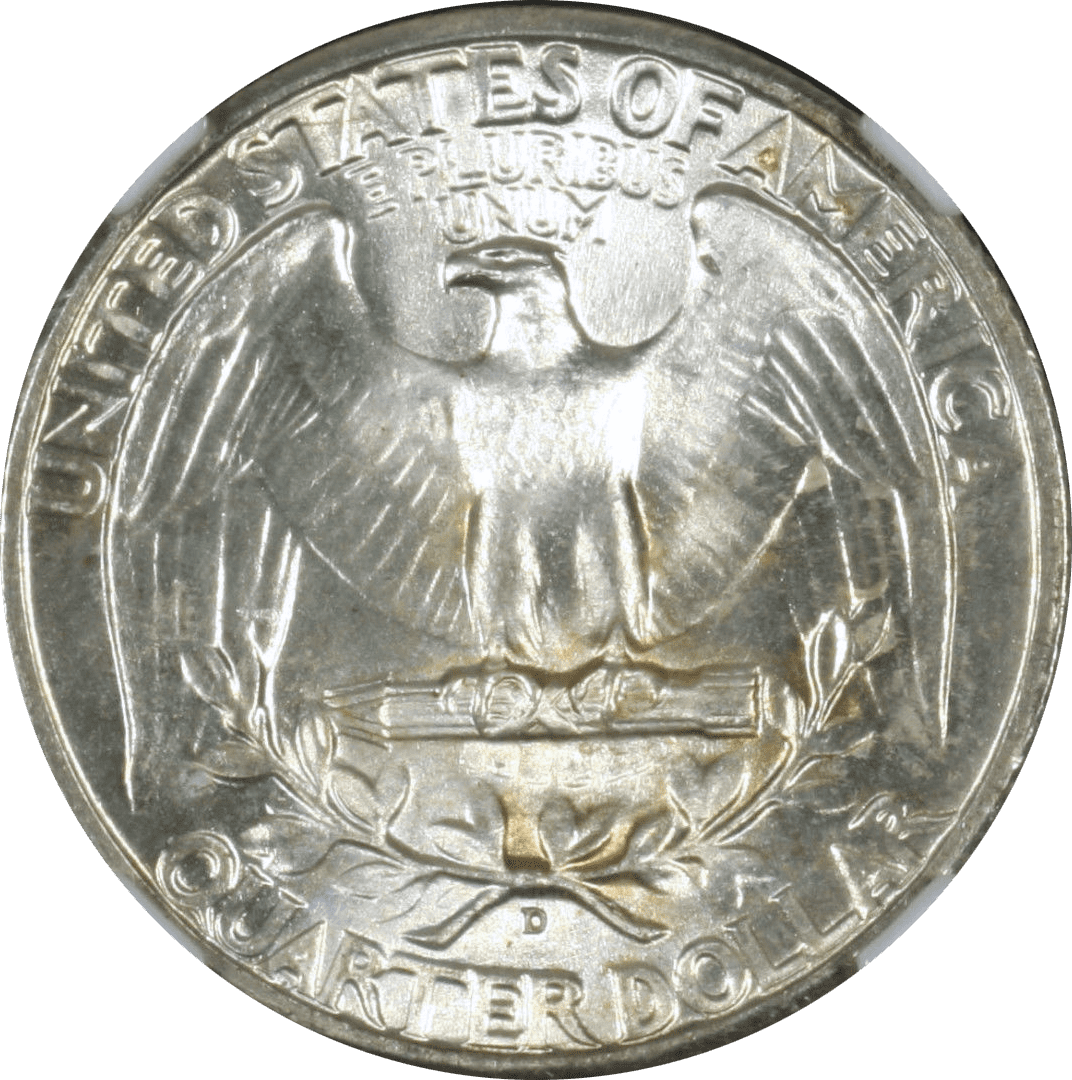 Turn your 1944 quarter over, and you’ll see more of Flanagan’s work. He also designed the image of an eagle with outstretched wings, perched on a bundle of arrows. A garland of olive branches below the eagle symbolizes peace.

The eagle takes up almost the whole of the coin surface. The words “United States of America” are fitted in between the edges of the wings and the rim of the coin.

Just above the eagle’s head, following the same curve, is the Latin motto “E pluribus unum”. This appears on all US coins and means “From the one, many”. It’s a reference to the country’s creation from the states.

At the bottom of the dollar, again curving along the coin edge, is the denomination. This is inscribed in full as “One dollar”.

Later Washington quarters have the mint mark on the obverse. But in 1944 it appeared on the reverse – “D” for Denver and “S” for San Francisco. Look for it just above the denomination and below the ribbon tying together the olive branches.

Other Features of the 1944 Quarter

The 1944 quarter measures 24.3 millieters in diameter and weighs 6.30 grams. It’s the same size, but a little heavier than the later copper cored quarters. Those weigh 5.67 grams.

It also has what’s known as a “reeded edge”. Turn it on its side and there are a series of grooves running at right angles to the coin face. These marks are made by the collar which holds the coin in place as it’s struck. And they were originally designed to stop people shaving silvers of precious metals off the edge.

In 1944, the dies used to strike the designs were changed. The new versions had a much clearer typeface. And the date is slightly larger than in earlier mintages.

This YouTube video from BigDCoins looks in detail at the design of the 1944 quarter. And it compares the appearance of the coin at different grades. 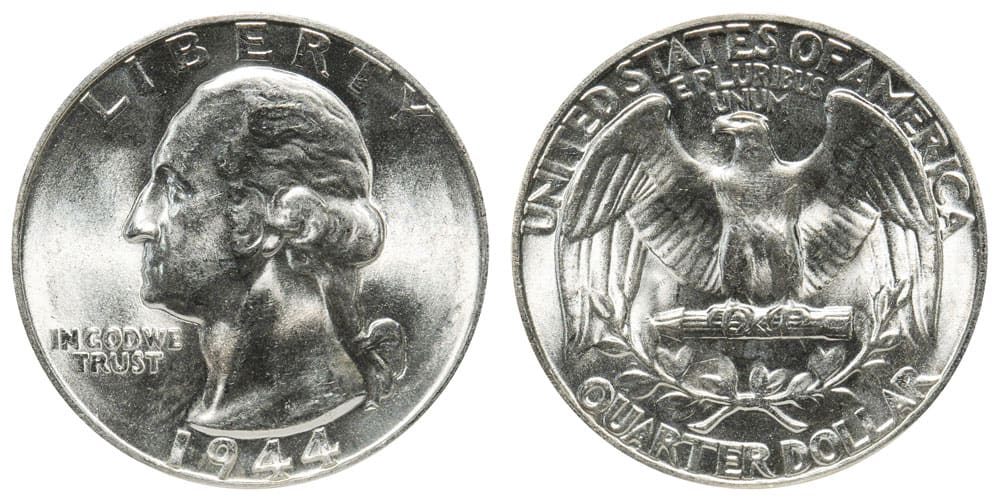 If your coin doesn’t have a mint mark, it was made in Philadelphia. And it was one of over 100 million 1944 quarters struck there that year.

About three quarters of 1944 quarters came from Philadelphia. So at most grades, values are slightly lower than for quarters struck in Denver or San Francisco. That changes at the very highest gem quality grades, though, where lower availability is reflected in higher prices.

You can pick up a nice 1944 Philadelphia quarter in extremely fine condition (graded X45) for about $7. And even uncirculated coins can be found at only slightly higher prices. A mint state coin graded MS60 is worth about $10.

The better the quality, the rarer the coin and the higher the price. At MS65, a 1944 P quarter is valued by independent coin graders the PCGS at $32. At MS67, that value rises more than tenfold to $325. That’s higher than an equivalent coin from Denver or San Francisco.

The finest known examples are graded MS68. The PCGS has graded just two coins at this level and values them at $13,500 each.

The Denver facility struck over 14 million quarters in 1944. That’s a much lower figure than the Philadelphia mintage. And if you have a coin with a D mintmark, at most grades it will be worth more than a Philadelphia counterpart.

Many of the coins are well struck with great luster. And it’s possible to get your hands on a very attractive coin without spending a fortune. 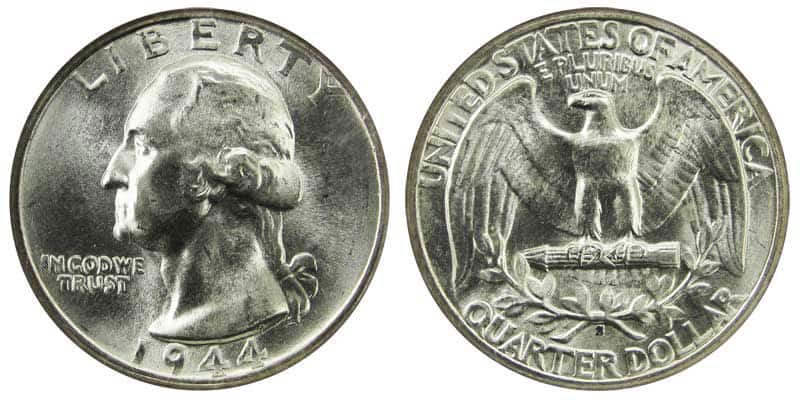 San Francisco struck fewer 1944 quarters than either Denver or Philadelphia. Just over 12.5 million coins came out of the presses there. Values are similar to Denver quarters at circulated grades.

In mint condition, San Francisco quarters can command a premium. At MS60, the PCGS values them at $26 – well over twice as much as coins from the other facilities. That rises to $50 at MS65.

The finest 1944 S quarter graded by PCGS is a single coin graded MS68+, with strong toning on the obverse. It was last sold at auction in 2018, making just under $4,000. The other main coin grading agency, the NGC, has certified a further two coins at the equivalent grading of MS68*. 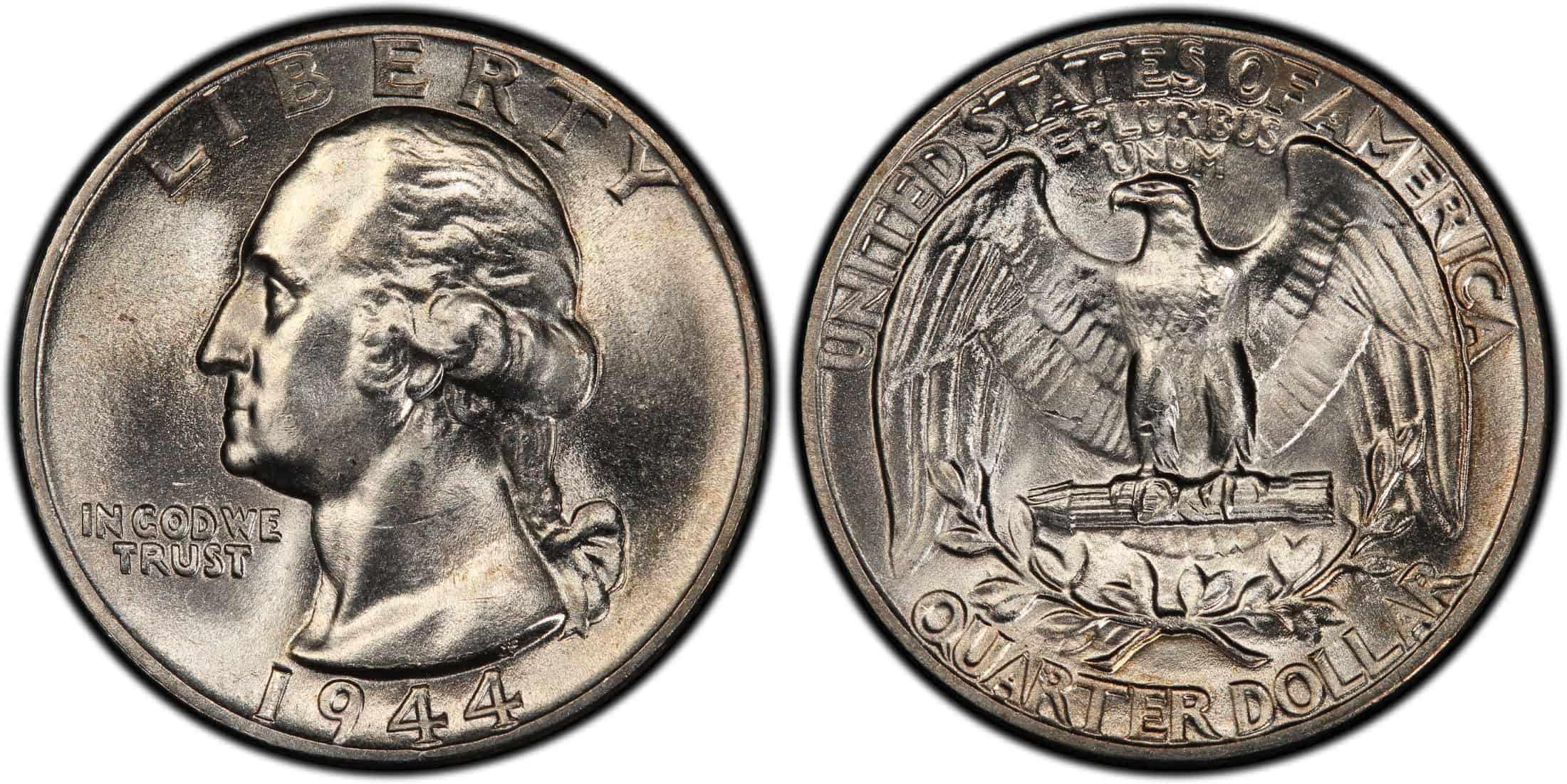 Double die errors result from an error in the die used to strike them.

To capture every detail of the coin design, in the past dies had to be struck twice. And if there was any movement between the strikes, the die would be left with a double image. This would then be transferred to the coins struck from that die.

If the doubling is shown on the obverse, it’s known as a “double die obverse”, often shortened to DDO in coin descriptions. (And yes, the other possibility is “double die reverse”, or DDR.)

1944 quarters struck in Philadelphia, Denver and San Francisco all include examples of double die obverse errors.

Look for the doubling on the letters and date on the front of the coin. With Denver and San Francisco quarters, doubling appears on the letters “JF” at the base of Washington’s neck too.

A 1944 S quarter graded AU55 (about uncirculated) with a double die obverse error sold at auction for $75. A higher quality MS64 coin from the same mint facility sold for $135.

On some of the 1944 quarters struck in Denver, the mintmark has been re-punched. The original mintmark is often quite difficult to spot – you’ll need a microscope or coin loupe. In coin descriptions, you may see the error abbreviated as RPM.

Because the error is relatively subtle, it doesn’t command huge prices. A 1944 D quarter with re-punched mintmark, graded MS65, sold at auction for $25.

This YouTube video from Couch Collectibles looks at errors in quarters from the 1940s. And it shows examples of both these 1944 errors.

Yes – or at least, they’re 90 per cent silver. (The other 10 per cent is copper, added to make the coins more robust.)

The composition of the Washington quarter was changed in 1965. Coins from that year onwards have a copper core clad in cupronickel. Turn them on their side, and you’ll often see signs of the copper coming through.

1944 quarters were minted in three facilities – Philadelphia, Denver and San Francisco. In 1944, the Philadelphia mint facility wasn’t using a mintmark. So if your 1944 quarter was struck there, you won’t find one.

With Denver and San Francisco quarters, look for the mintmark on the reverse. It appears just above the letters “D” and “O” in “dollar”, and below the ribbon that ties together the two olive branches.