History of the 1937 Buffalo Nickel

A nickel is a 5-cent coin with a silver tone. It has no actual silver in it though – just a core of 75% copper coated with 25% nickel for that sparkly grey shine. The top coat is how the coin got its nickname because earlier half dimes from 1792 to 1873 were made of silver. Back then, dime was spelled disme, but the ‘s’ was silent, and it soon exited along with the silver.

As we mentioned, the first two nickel series after the silver half dime were the Shield Nickel (1866 to 1883) and the Liberty Head or V Nickel (1883 to 1913). These coins were stately, but not especially pretty. So in 1904, President Theodore Roosevelt requested the mint to make coins that had more artistic merit. He asked them to hire professional sculptors for the task.

This upset the mint engravers, but they had no choice. In 1904, Augustus Saint-Gaudens was commissioned to redesign the gold coins i.e. the eagle ($10) and the double eagle ($20). But he died of cancer in 1907, and one of his assistants stepped in to redesign the nickel. James Earle Fraser offered two sketches – one featuring Abraham Lincoln and one buffalo design.

The buffalo is actually a bison since buffaloes are mostly found in Asia and Africa while bison are indigenous to America. The mint opted for the buffalo design and paid Fraser $2,500 for his work. But he had to do several rounds of edits to appease conflicting forces – both for practical reasons and partisan ones. And he got another $666.15 for the extra work.

As an aside, Buffalo Nickels (21.21mm) are slightly larger than Shield Nickels (20.5mm). And V Nickels were intended to be even larger at 22mm, but Charles Barber, the Mint Engraver, shrunk them down to 21.21mm. This is an important distinction because the size of V Nickels (plus the missing CENTS on some coins) encouraged counterfeiters to gild them as $5 coins.

The End of the Buffalo Nickel

The public loved the Buffalo Nickel, and so did the president. But numismatists, media experts, and critics disagreed. They noted that while the coin was magnificent in its new state, it would be unsightly in circulation because the features would soon wear off. These complaints had some merit since several parts of the coin’s design had a high relief level.

The spots that were most raised were the cheekbone on the portrait, the mintage date, the tail of the bison, the horns of the bison, and the coin’s denomination. These raised sections made dies wear out three times faster than V Nickel dies. To partially resolve this, Fraser flattened the hill that the bison was standing on. He also thickened the font on the wording.

These changes meant Buffalo Nickels came in Type 1 (with the hill) and Type 2 (with flatter ground). Ironically, the edits made dies break even faster, so even today, lots of Buffalo Nickels appear to be dateless. There was also some controversy with Hobbs Manufacturing. They made counterfeit detection devices and felt the Buffalo Nickel would stump their tests.

Clarence Hobbs spent over six months demanding various changes. In the end, Fraser got fed up and wrote a 10-page protest letter to Franklin MacVeagh, the Secretary of the US Treasury. MacVeagh held a legal-style hearing involving both parties and their lawyers. He concluded the coin didn’t need the changes Hobbs was insisting on, so coinage finally began.

And although the coin was so punishing on dies, federal law stipulates a coin must be used for at least 25 years before its design changed. Still, the Mint was happy to replace the Buffalo Nickel in 1938, switching over to the Jefferson Nickel. That said, about 7B Buffalo Nickels were coined in 1938, along with close to 29B Jefferson Nickels. That was a busy year!

Features of the 1937 Buffalo Nickel

The Buffalo Nickel was issued from 1913 to 1938. The mint was eager to make the switch because V Nickels (aka Liberty Head Nickels) were so prone to fakery. Criminals would coat them in a thin layer of gold, add reeds to the edge, and claim they were $5 gold coins! Buffalo Nickels are far more distinct and not as easy to counterfeit, so let’s check out their key points.

The Obverse of the 1937 Buffalo Nickel 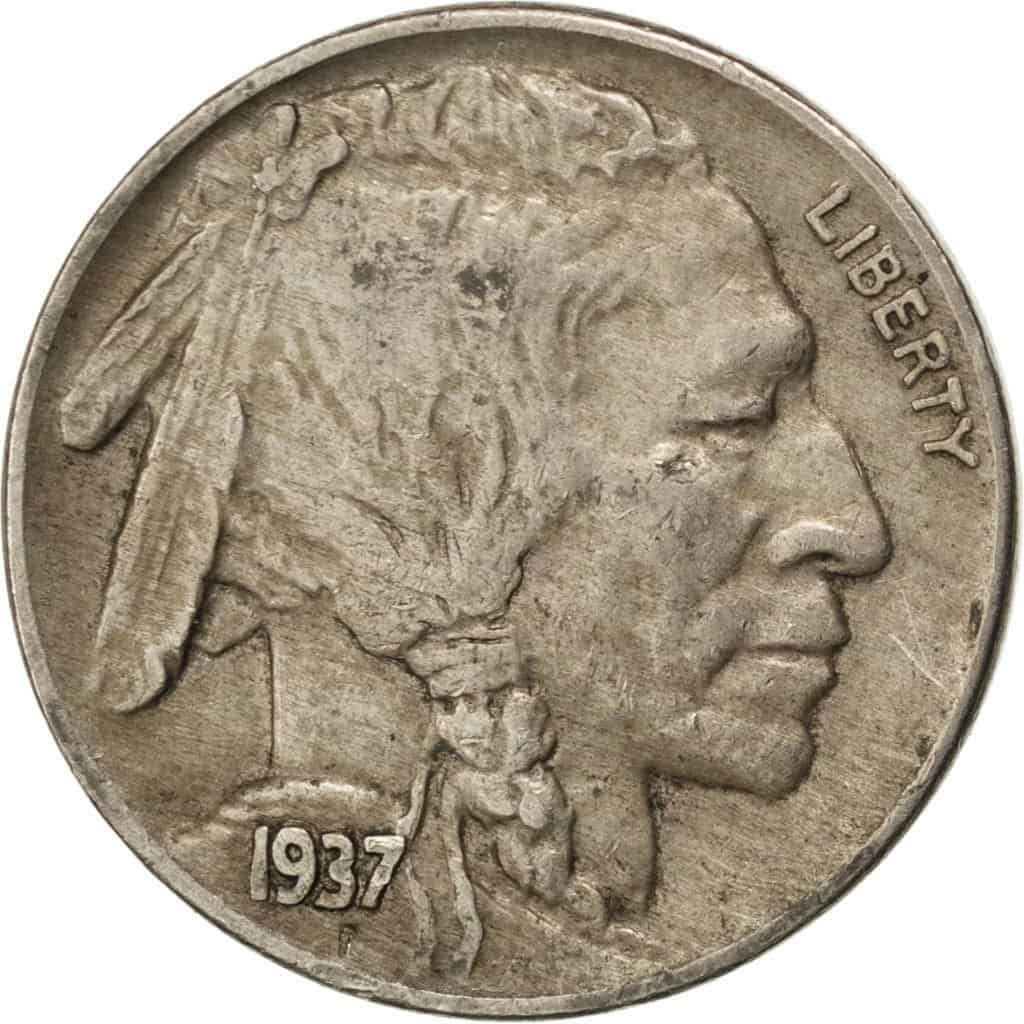 The obverse (heads side) of the 1937 Buffalo Nickel features a Native American man with traditional feathers styled into his hair. It’s a large portrait that almost touches the rim of the coin. This device (that’s the technical name for the image or portrait on a coin) faces right.

The legend Liberty sits on the right, in front of his forehead and nose. The mint date is on the left, below his neck. The designer’s initial – F for Fraser – is under the mintage date, so on many Buffalo Nickels, both the date and the designer’s signature have worn off in circulation.

The Reverse of the 1937 Buffalo Nickel 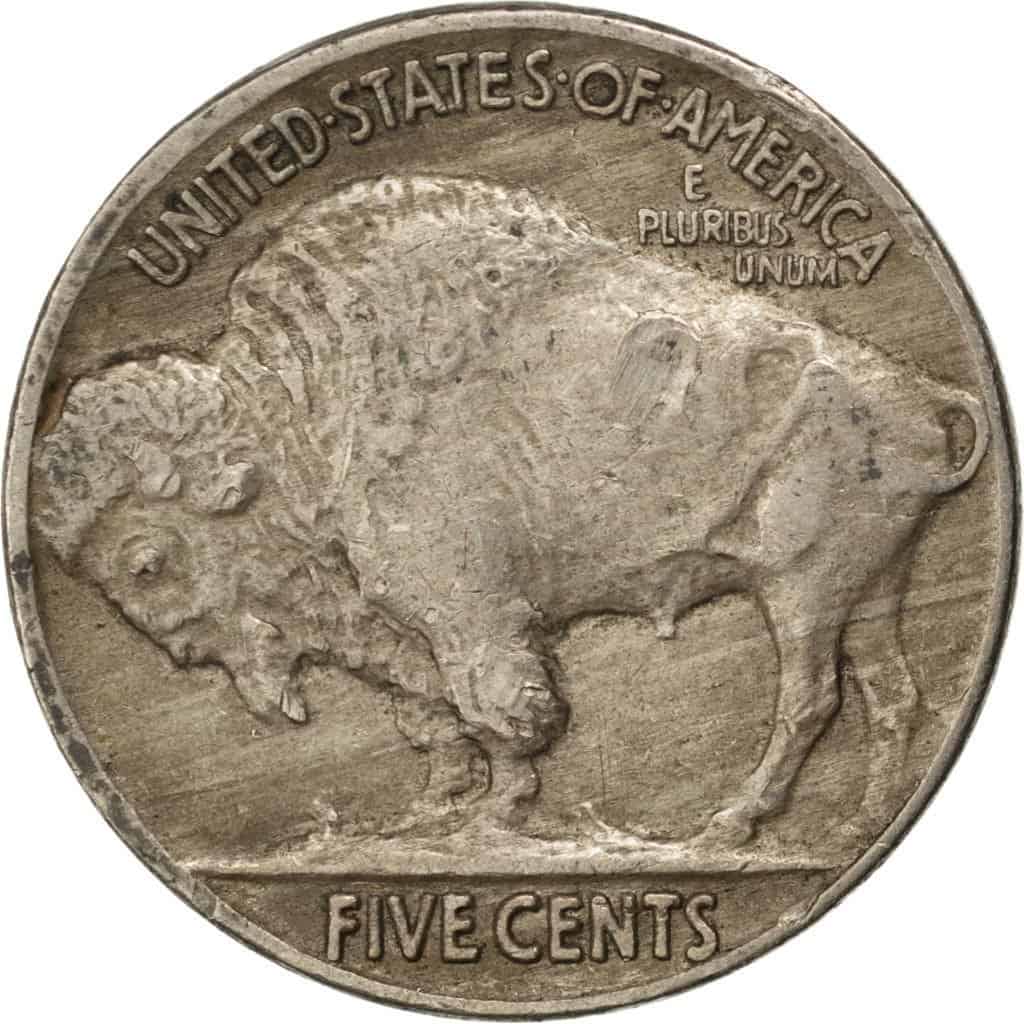 The reverse (tails side) of the 1937 Buffalo Nickel features a bison facing left. It’s an equally tight device that fills the coin from left to right. The upper collar reads United States of America, and E Pluribus Unum is squashed underneath. At the bottom of the coin is its denomination, Five Cents, and the mint mark is at the base, below the words Five Cents.

Other Features of the 1937 Buffalo Nickel

The first and final few years of any coin series have high collector’s value. And since Buffalo Nickels were phased out in 1938, these last two mint dates can fetch a pretty penny. Error varieties are worth even more, so let’s walk through the categories of 1937 Buffalo Nickels. 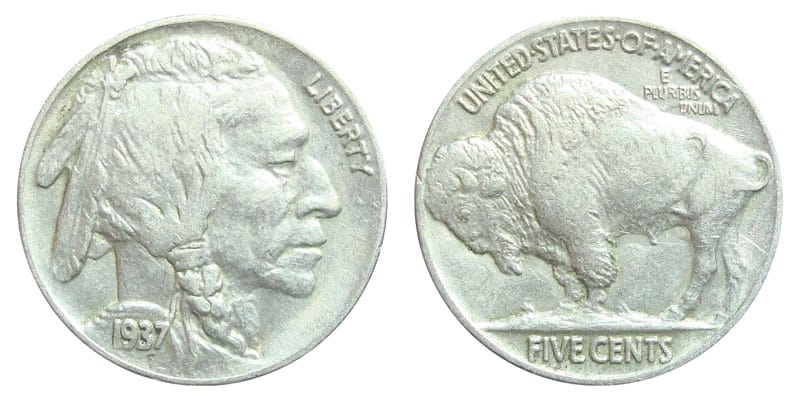 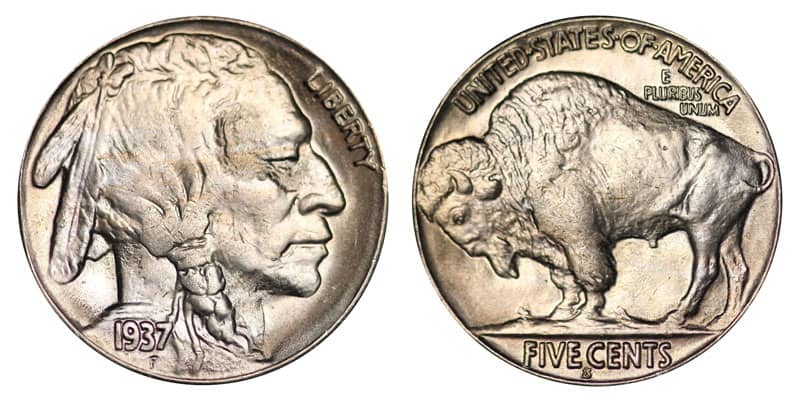 1937 saw 17,826,000 Buffalo Nickels being coined at the Denver Mint. This is a curious category because a regular 1937-D in mint state would barely get you $50. The famous 3-legs error occurs on 1937-Ds as well, but error-free 1937-D Buffalo Nickels aren’t worth assessing since the grading fee starts at $30 and so far, even the highest-graded D-nickel is under $50.

Because Buffalo Nickels wore out dies so quickly, the dies were used well past their ‘expiry date’, which means the coins had lots of errors. One reverse die had a flaw, so mint workers polished it to undo the blemish. But they buffed it so much that one of the buffalo’s legs came off, and every coin minted using that die had the same 3-leg error, creating the 3-leg variety.

A variety is when multiple coins have the same mistake, possibly because they all used the same damaged die. Varieties could have a handful of coins or even several thousand. And the 3-leg 1937 Buffalo Nickel variety is worth about $600 in low grades but can get as high as $6,000 in mint states. One mind-blowing sample in MS 68 was auctioned for over $48,000! 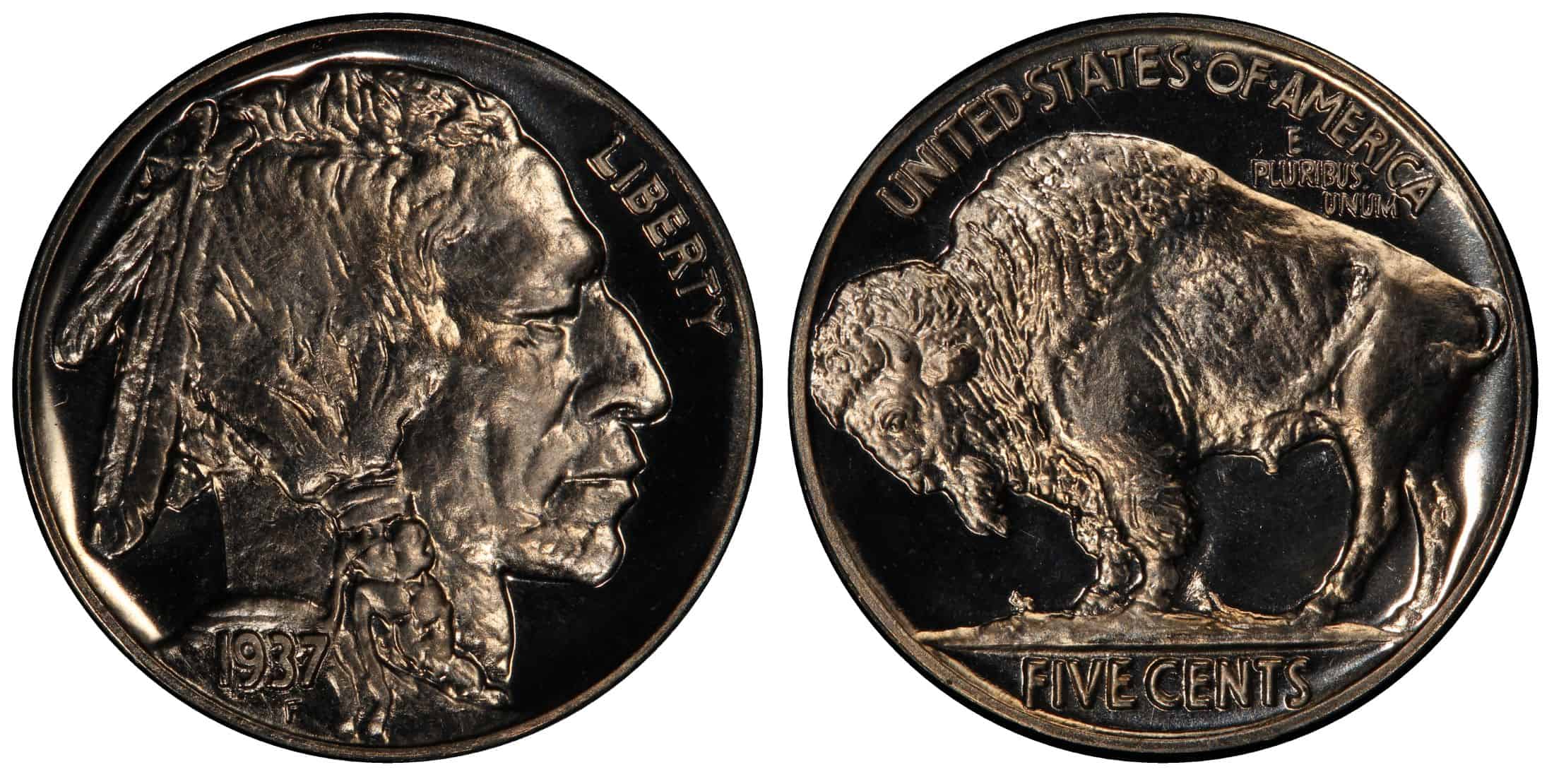 In 1937, Proof Nickels were coined in Philadelphia, meaning they had no mint marks. While many of us assume Proof is a coin grade, it’s actually a variety of coins minted with special dies and coined on customized planchets. They’re burnished for that mirror shine and the dies are chemically treated for clarity. A 1937 PR 68 Buffalo Nickel is worth over $40,000.

Errors make coins less pleasant to look at and play with. But in the eyes of a collector, those errors could be worth thousands of dollars! Still, it depends on the type of mistake on the coin. Some are only a few bucks, and others are faked for profit. Let’s explore some top flaws!

While many of the details on a coin are machine-made, the mint date was done by hand until 1989. So on pre-1990 coins, a hand-held punch was used to verify the source mint of the coin and if the coin moved between strikes, the mint mark would shift. This is called an RPM or a re-punched mint mark. An S/S/S (punched over itself three times) is worth $150 in MS 65.

As we just mentioned, RPMs can have the same mint mark re-stamped. The example above was an S/S/S which means the S was re-punched 3 times. This example is a D/D, so a D on top of another D. But FYI, you can also have S/D or D/S RPMs if the coin was recycled at a different mint. This 1937 D/D Buffalo Nickel in MS 65 was auctioned for $185. Not too bad.

FAQs About the 1937 Buffalo Nickel

What makes a 1937 Buffalo Nickel Valuable?

Errors. A typical 1937 Buffalo Nickel is only worth a dollar in low grades, mostly due to the melt value of its copper content. In mint state, you can get a few thousand dollars for a graded nickel. But if you have the 3-legs error, you can auction your coin for about $50K! It only occurs on 1937-D Buffalo Nickels though, so ignore (P) and S in your coin roll search!