Rob Paulsen Coin » 1900 Indian Head Penny Value: How Much Is It Worth Today?

Indian Head pennies are unique one-cent coins minted from 1859 to 1909 when the US Mint started Lincoln wheat penny production. Most of these beautiful pieces are heavily worn out because of the long time spent in circulation.

On the other hand, the 1900 Indian Head penny value can be high for pieces in the mint state. These coins are collectible nowadays, while well-preserved specimens are rare and can be worth a fortune.

History of the 1900 Indian Head Penny

The US Mint started minting Indian Head pennies in 1859, and the production lasted until 1909, when the Wheat penny appeared. The reason for this replacement was Lincoln’s birth anniversary, which was an excellent reason to break tradition.

Unlike previous American coinage, the new Lincoln penny was the first coin with one historical person on the obverse. Even the Indian Head penny didn’t show an authentic Native American but an imaginary portrait of Lady Liberty wearing a headdress.

Mint chief engraver James Barton Longacre created this lovely coin design. The idea was to depict an Indian, but he showed Lady Liberty instead. However, that didn’t affect the chosen name, and the coin is still known as the Indian head.

Longacre believed that the headdress was typical for the primitive races in America, making it more appropriate for the coin design than the Phrygian cap.

His attitude was that this emblem was a well-defined symbol of national inheritance and a memorial of American Liberty. No one asked the Native Americans about their opinion on the subject.

The first Indian Head pennies minted from 1859 to 1864 were made of 88% copper with added nickel. However, the Philadelphia mint switched to a 95% copper-tin alloy in 1864, making the only composition change in the 50-year production.

Most experts and collectors consider the Indian Head penny the most popular small-cent series in American coinage, right next to the Lincoln penny. Plus, they are in a group of the earliest American coinage, making them historically significant.

Despite their age, these coins are widely available on the market, particularly those in the lowest grades. Only pieces of high quality can be expensive and appealing to serious collectors, including a few key specimens and rarities.

Features of the 1900 Indian Head Penny

Despite the name, the 1900 Indian Head penny depicts a girl wearing an Indian headdress. There is one more intriguing thing about this coin. As you know, the US coinage recognizes dollars and cents, but this coin type is widely known as a penny.

Penny is actually the British coin, while American one cent is an official currency in the United States of America. It is the piece with the lowest value in the US since 1857, when the half-cent was abolished.

One cent equals one-hundredth of a dollar and has no connection with the British penny. However, the name is still actual without any particular reason besides a habit.

Americans like collecting these lovely copper coins produced from 1859 to 1909 when Lincoln pennies replaced them in honor of assassinated President’s birth centenary. 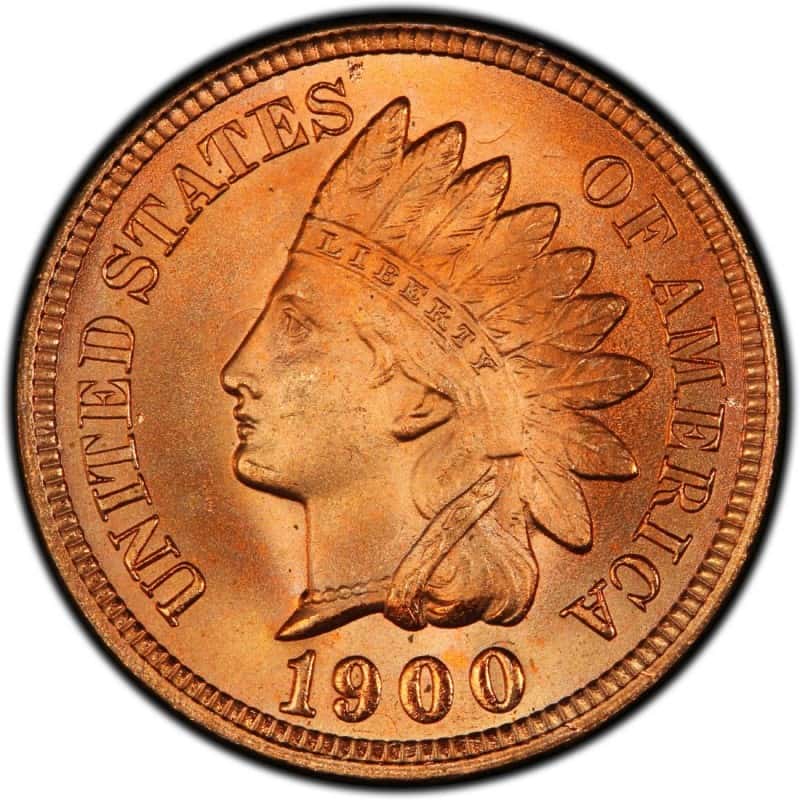 Despite the name, you can see Lady Liberty on this coin obverse. Ironically, the coin got the name Indian penny honoring the people who lost their land at that moment and ended up in the reservations.

Engraver Longacre probably chose this design because of the low relief of the laurel wreath. Such an option made minting effortless and coins long-lived.

There is a rumor that the model for the obverse was Longacre’s 12 years old daughter, but he stated that the model was a statue of Crouching Venus. In any case, the obverse contains the central bust with the UNITED STATES OF AMERICA along the reeded rim and the DATE below.

You can also notice the LIBERTY inscription along the ribbon in Liberty’s hair. A small letter L, representing Longacre’s initials, is struck between the lowest feather and the hair curl. 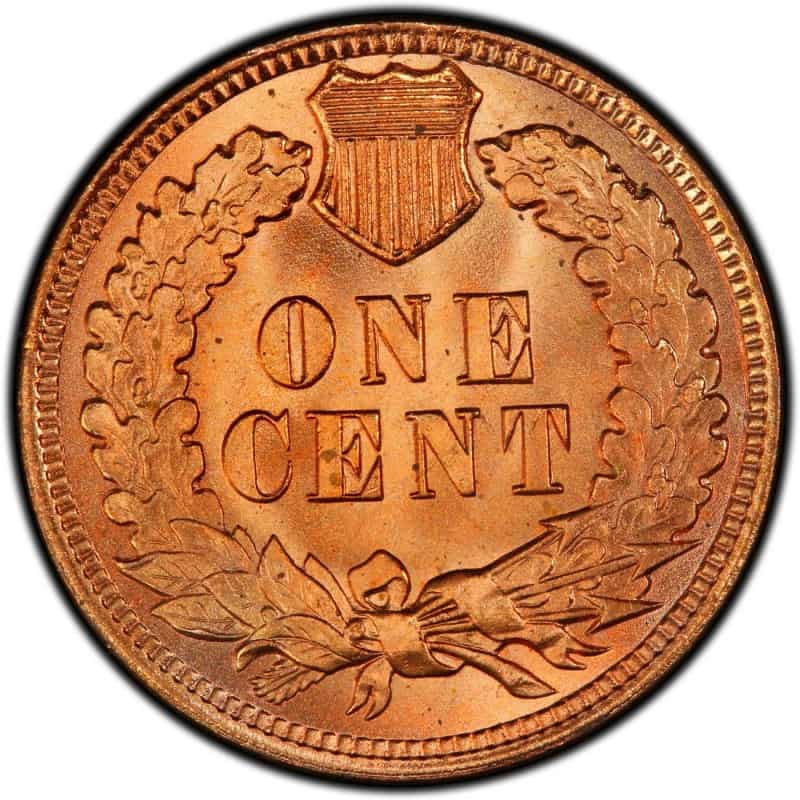 The elegant 1900 Indian Head penny reverse design includes centrally positioned ONE CENT, representing the denomination. It is tied with a ribbon at the coin bottom, fastening three arrows to symbolize war.

You can notice a rich oak wreath placed around the composition and a shield with seven horizontal and six vertical stripes, representing the first thirteen states.

Other features of the 1900 Indian Head penny

Their presence was the first attempt to prevent fraud before the new style with the reeds along the coin edge occurred.

The idea was to create the coin in a way that made any attempt to cut its edge impossible. That way of cheating was a common practice in the past, especially with specimens made of gold and silver.

In 1900, only the Philadelphia mint organized the Indian Head penny production. The mintage included two coin types, proofs and those from the regular strike.

After years with low mintage, the US Mint struck 66,833,764 pennies at the turn of two centuries. That was one of the highest produced numbers of these coins in the series. 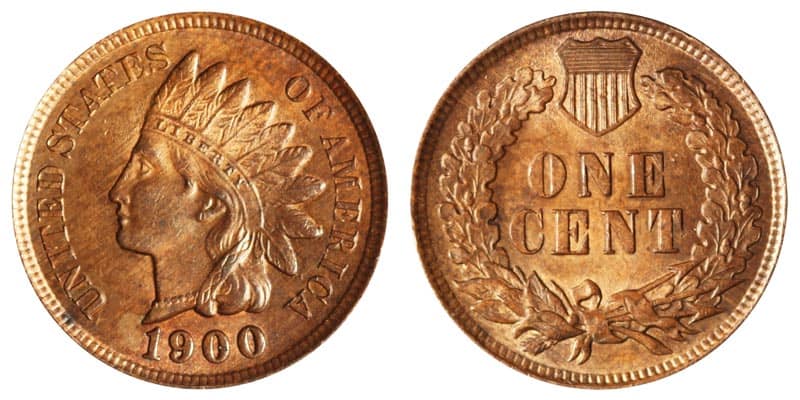 The Philadelphia mint had a high mintage of 66,831,502 Indian Head pennies in 1900. They are typically inexpensive, despite their age, because most are in poor condition. You can expect to purchase one of these coins in the lowest grades for $1 to $30.

Even those in the mint state are affordable for most collectors. In most cases, you should pay $40 to $155 for the best existing specimens. Only coins with the desirable red toning are ultimately valuable, and collectors buy them for $1,300 to $6,250.

Even though the estimated price is high, the most pricey Indian Head penny struck in 1900 was even more expensive. One red specimen in an MS 67+ grade reached $28,200 in 2021 at one of the Legend Rare Coin Auctions. 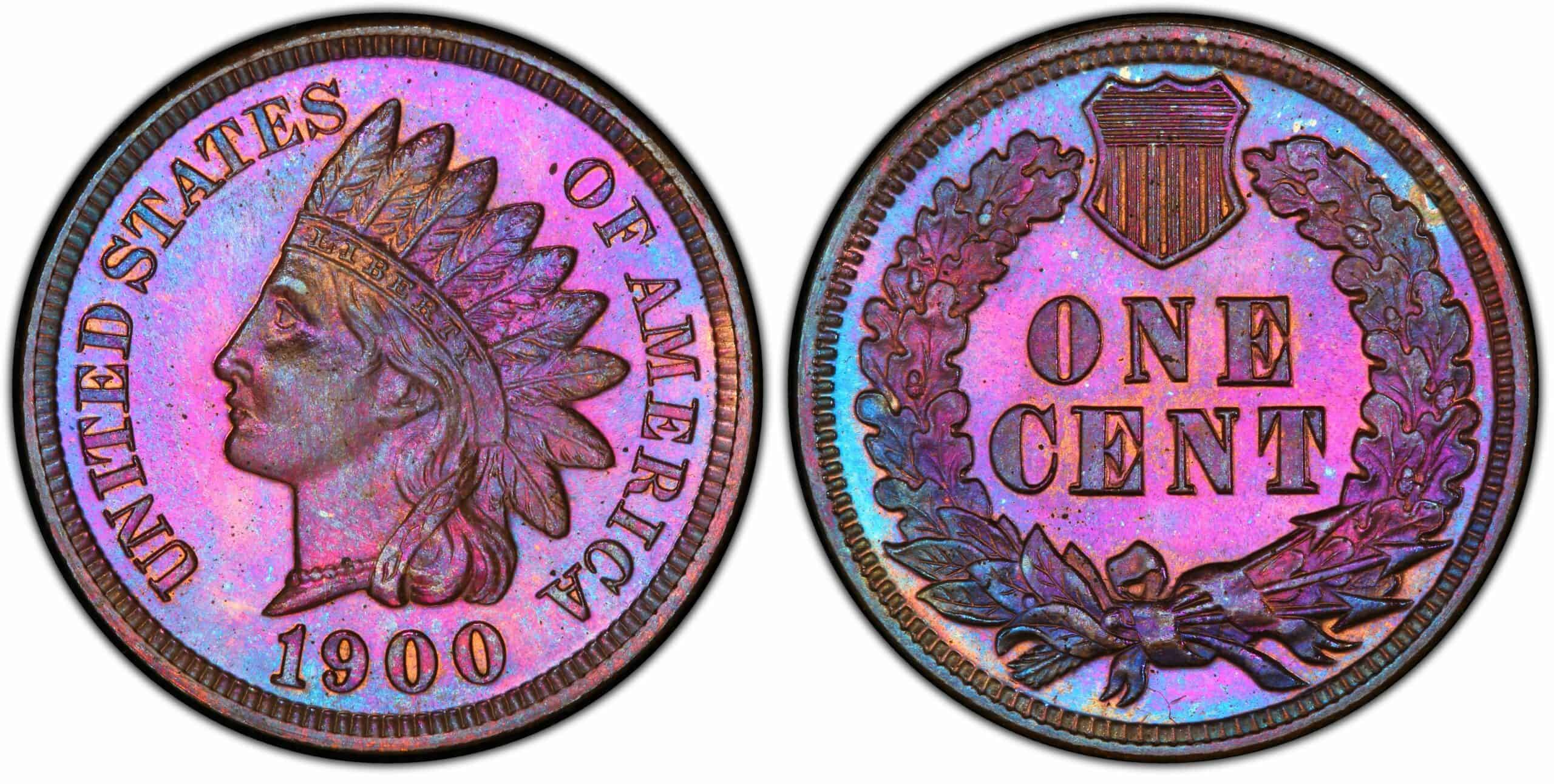 The Philadelphia minted 2,262 proofs in 1900, and you can find them in three colors nowadays. These toning variations directly affect each piece’s value, so you should set aside a high sum for one:

As you can see, the red pieces are the most expensive, and collectors prefer seeing them in their collections. The most valuable coin with this rare color is the 1900 PR 68 RD penny, which sold for $7,800.

Believe it or not, it is almost impossible to find the 1900 Indian Head penny with an error. However, some collectors referred to the existence of pieces with slight imperfections, like the misplaced date and double-die reverse.

FAQ about the 1900 Indian Head Penny

What makes an Indian Head penny produced in 1900 rare?

Since most of these pennies are heavily damaged or worn out after 120 years from minting, these in excellent condition are rare. The particularly scarce category is sharply struck coins with stylish red toning, and they are always valuable and highly appreciated among collectors.

Which 1900 Indian Head pennies are worth a lot of money?

How much is the 1900 Indian Head penny (No Mint mark) worth?

If you are one of the dedicated collectors who prefer the best-rating coins, you can find one of the red-toned specimens for $1,300 to $6,250.

What are the most collectible Indian Head pennies?

Numerous Indian Head pennies in excellent condition are highly collectible and worth thousands of dollars. However, some of them are highly expensive, like: