The 1776 to 1976 Washington quarter is a specially designed US Mint edition. In 1976 was 200 years since the Founding Fathers signed the Declaration of Independence. This coin was a part of this jubilee commemoration and is well-known as the Bicentennial Washington quarter.

Due to the extensive circulation, the 1776-1976 quarter value is relatively low. Most often, the price depends on the condition, the mint mark, and the silver value on the stock market.

In 1776, Founding Fathers decided on Americans’ freedom by signing the Declaration of Independence. Almost ten years later, Congress officially authorized dollar issuance in 1785, and it became the official US currency in 1792 through the Coinage Act.

In the same year, the national mint in Philadelphia began operating, and the first quarter was issued in 1796.

The centennial celebration of the Declaration didn’t cause changes in US coinage, but the bicentennial did. Preparations started already in 1971 with the presentation of draft laws proposing the 1776-1976 bicentennial coinage’s minting.

Although the commemorative coin program has been inactive since 1954, a change in the Act necessitated the quarter, half-dollar, and dollar redesign.

The redesigned coins’ production began in 1975, and the circulations of the Bicentennial quarters, half dollars, and dollars were extensive. Most of these pieces were intended for circulation to avoid hoarding.

In October 1973, the US Mint Director Mary Brooks announced a competition for a new design with a corresponding prize of $5,000 for each winner. It included all American citizens except for government sculptors and competition judges.

While Flanagan’s design with George Washington’s bust remains on the obverse, the winner changed the reverse. However, the winning design underwent minor changes, referred to:

The 1776-1976 Bicentennial quarter appeared with two different compositions. The Philadelphia and Denver mints produced those made of copper and nickel, while coins containing 40% silver and two proof types came from San Francisco. 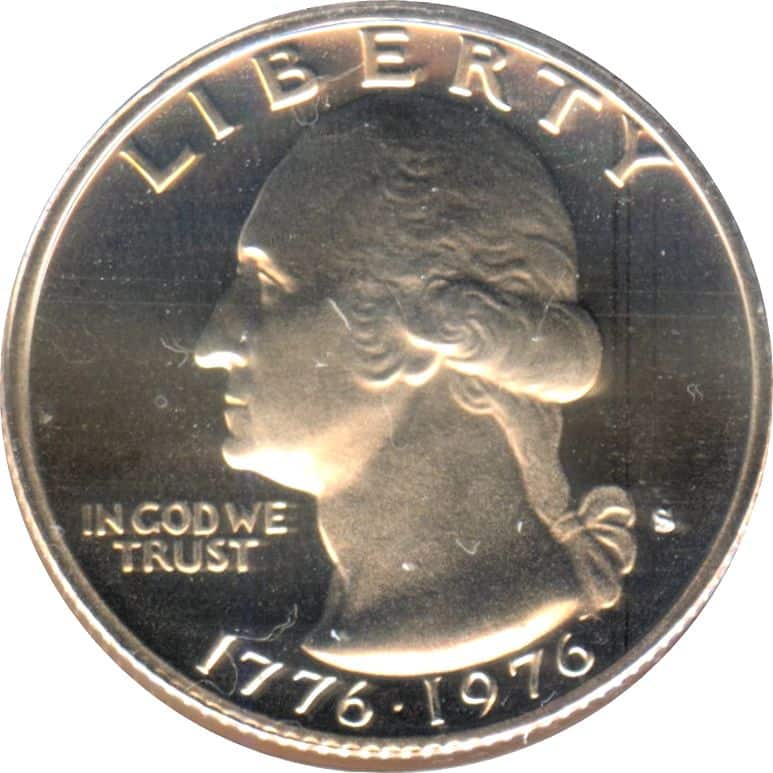 As mentioned, this quarter obverse retained centrally positioned Flanagan’s design of George Washington’s bust. The profile shows the former President with hair tied in a ponytail, a hairstyle characteristic in men of that time.

You can read the word LIBERTY on the upper rim above Washington’s head. In front of the profile, on the left side, is the phrase IN GOD WE TRUST.

Behind the profile, closer to the right edge, you can find the mint mark, except in coins from Philadelphia. The obverse also shows the minting year 1776-1976 characteristic for the bicentennial coins. 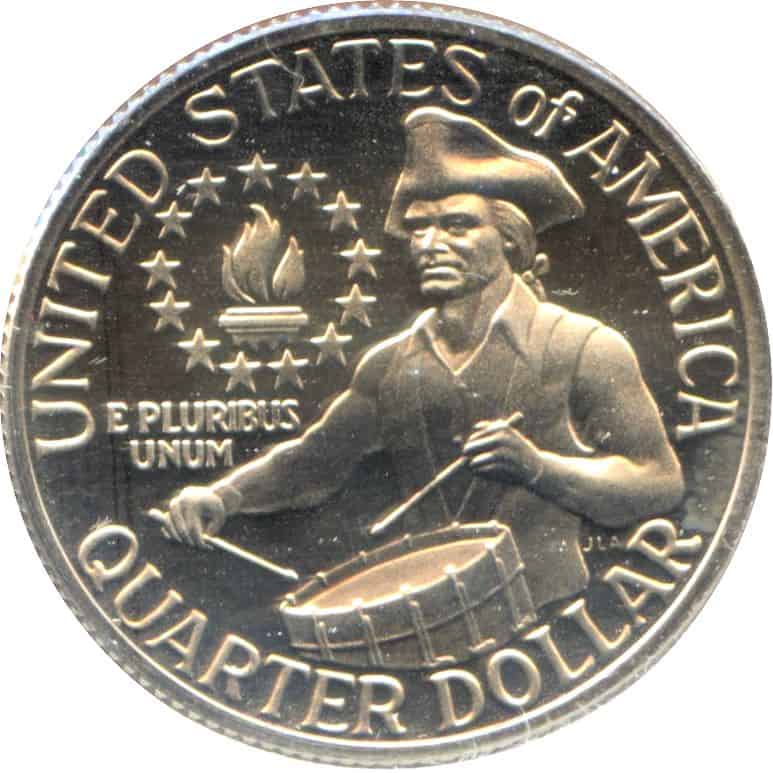 The reverse design for this quarter was the Jack L. Ahr work. On the reverse, you can see a colonial soldier in motion playing drums. To his left is a victory torch inside a ring of 13 stars, representing thirteen original states.

Below the victory torch, you can read a Latin saying E PLURIBUS UNUM, while the inscription UNITED STATES OF AMERICA extends along the upper rim above the drummer’s head. The denomination QUARTER DOLLAR is struck on the bottom edge, while the initials JLA are under the soldier’s left hand.

Other features of the 1776-1976 Washington quarter 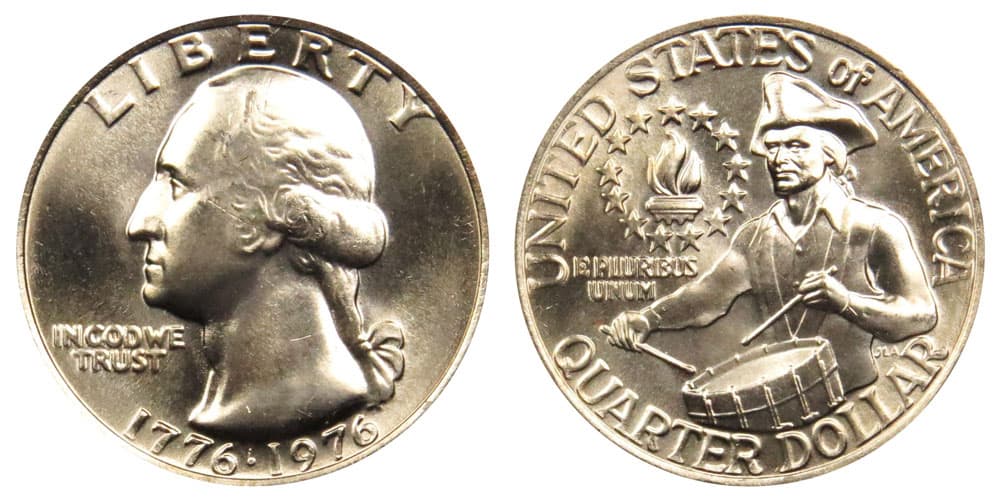 The Philadelphia mint struck 809,784,016 clad Bicentennial quarters made of copper and nickel. As these specimens’ circulation was extensive, some of the pieces haven’t survived by now.

The value of pieces spending years in circulation is low, so you can only get a nominal value of $0.25 for them. On the other hand, it is possible to make a little bit more money, about $6 to $10, by selling specimens in an MS 65 grade.

Only coins with a higher rating can bring surprisingly high premiums. For instance, one collector set aside as much as $1,200 for the 1776-1976 No Mint mark quarter in impeccable condition.

The Denver mint also minted only 1776-1976 copper and nickel quarters. The mintage of 860,118,839 is higher than the individual mintages of the other two mints. You can distinguish these pieces from the others by the mark D on the obverse, to the right of Washington’s bust.

Circulated quarters in average condition typically cost their nominal value, but you can expect a little more than $6 for specimens in the mint state. The most valuable coin is the 1776-1976 D MS 68 clad quarter that won the auction record in 2017. It changed the owner for an impressive $6,463. 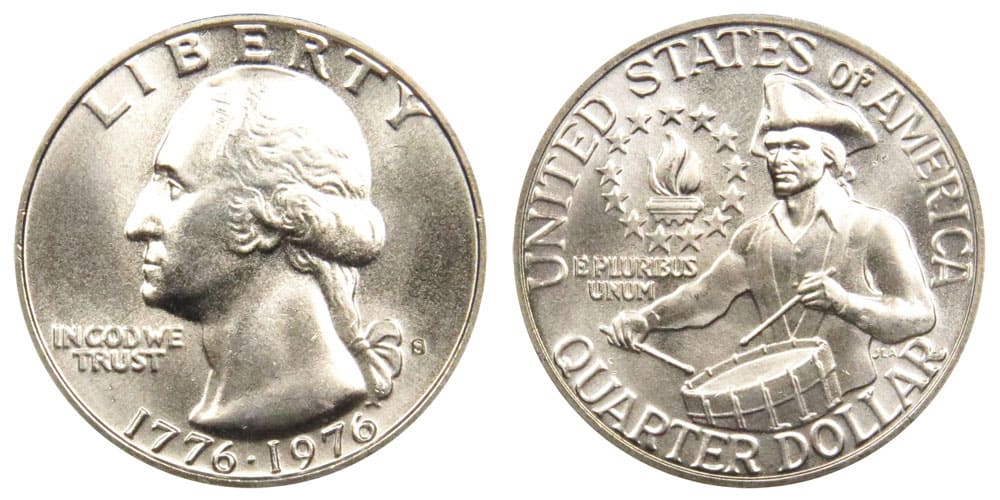 This year, the San Francisco mint minted 11,000,000 proof quarters containing 40% silver and copper. These coins came with the mark S on the obverse, helping you to distinguish them from the quarters from the other two mints.

The San Francisco mint produced 7,059,099 proof quarters with a double date and clad composition. Remember that this mint released both copper-nickel and silver-clad proof specimens, while pieces in the regular strike were all silver-clad. You can effortlessly recognize them by the letter S on the obverse.

Although proofs, these coins’ value is pretty insignificant. You can find them in the price range of $0.25 and $5.5, but the sums they sometimes reach at auctions can be high. For instance, one collector paid $6,038 for the 1776-1976 S proof clad quarter at the Bowers & Merena auction.

Surprisingly, the one in a PR 70 grade with cameo contrast was sold for just $63, and the DCAM specimen with a PR 70 rating changed hands for a modest $920. It shows how volatile and unpredictable auctions can be.

The San Francisco mint produced one more quarter type made of 40% silver with a mintage of 4,000,000 pieces. Their average price is not exceptionally high on the coin market, and you can find those in high grades for an affordable $8.

On the other hand, some of these quarters can bring a surprisingly high profit at auctions. One specimen with a low PR 25 rating was sold for $13,500 on eBay. Interestingly, the 1776-1976 S DCAM PR 70 silver-clad Bicentennial quarter went for $2,760 twelve years before that.

Considering that no minting process is perfect and the 1776-1976 Washington quarter mintage is almost 1,700,000,000, you can expect numerous errors in the series. The rule of thumb is that such specimens often reach incredible prices on the coin market.

This error occurred when a coin was struck on an improperly made die. Therefore, double inscriptions can appear on the obverse and reverse during minting. So far, collectors have found several doubled 1776-1976 quarters with an average price of about $800 to $3,300.

This error typically occurs when a coin die presses an already fully minted coin once again or over a wrong planchet. For instance, it was possible to find the dime design on the 1776-1976 Washington quarter, making these errors unique and valuable. One such specimen reached an incredible $12,000 at auction.

Sometimes, the fabric appears in the coin chambers during minting, and you can see its pattern over the original coin design. You can find such an error on a certain number of the 1776-1976 quarters’ obverse, but they are rare. One collector set aside just under $900 for one such specimen with MS 66 rating.

In this case, the coin was struck through the grease that fulfilled an old or dirty die. This coin came with an unclearly expressed drummer image, but it takes a lot of experience to determine this error.

Due to an improperly mounted planchet, the die struck the coin inaccurately, moving the design to one coin side. This shift can be from 5% to 95%, depending on how many design percent you can see. The smaller the design percentage is visible, the greater the specimen value.

The 1776-1976 Bicentennial Washington quarter minting was extensive, with nearly 1,700,000,000 produced pieces. That is why we can’t talk about its rarity nowadays.

The 1776-1976 No mint mark Washington quarter value is insignificant on the coin market. You can buy a circulated specimen for its face value, while pieces in the mint state cost a modest $5 to $7.

The 1776-1976 Washington quarters containing an error are always scarce and valuable. The rarest are pieces produced in San Francisco without the S mint mark. It is known that then-President Gerald Ford got those rare coins, but there is no confirmation whether they still exist.

Can a send a video??