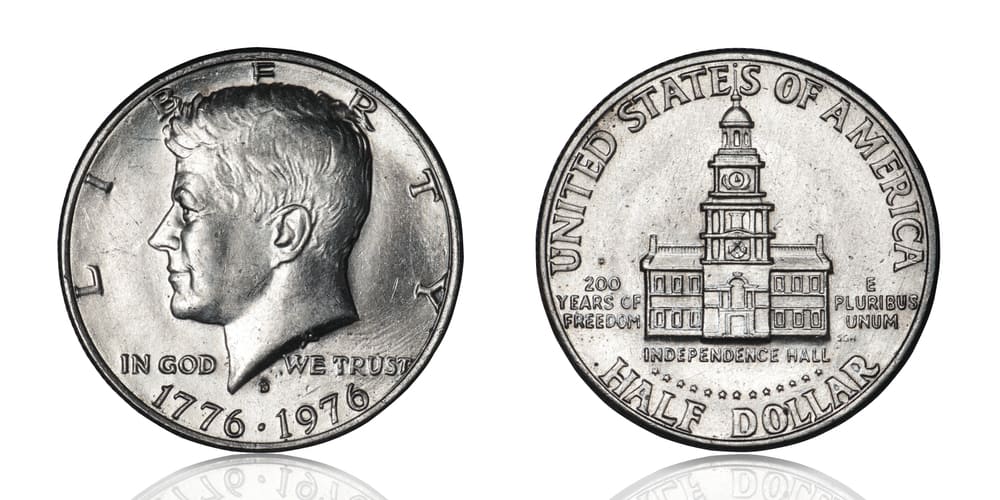 $1 coins have never been popular in the US because they’re bulky. Our preferred coin of choice is the quarter or 25c. The US Mint stopped producing half dollars for circulation in 2002 due to disuse, but they resumed in 2021. How much is a 1776 to 1976 half dollar worth? In mint state, the coin can net $5,000, but a typical coin is closer to its face value of 50c.

While most people prefer dollar bills or credit cards, half dollars and dollar coins have always been popular at casinos. They’re just the right size and weight for slot machines. But the 1776 to 1976 half dollar isn’t just any old coin. It was one of three coins minted to celebrate our 200 years of freedom from the British Empire, so these bicentennial coins are a big deal.

The other two coins were a quarter and a dollar. All three coins were redesigned in a contest that had a cash prize of $5,000, and artists were tasked to revamp the reverse of the coins. That’s the tails side. The obverse of the coins retained their existing device, which in the case of the half dollar was the 35th President of the United States, John Fitzgerald Kennedy – JFK.

Half dollars used to be 90% silver. Between 1965 and 1970, that amount reduced to 40%, and after 1971, half dollars adopted the same copper-nickel clad used in quarters and dollars. It was nicknamed the Johnson Sandwich after Lyndon B. Johnson, the 36th President. The sandwich contained 75% of copper and 25% of nickel around a core of 100% pure copper.

For the Love of John F. Kennedy

You won’t find any half dollars marked 1975 though. JFK first appeared on the half dollar a month after his assassination. Before that, half dollars featured Benjamin Franklin on the front. The coin was intended to honor the beloved president and was 90% silver. People hoarded those 1964 Kennedy half dollars, both for their melt value and historical merit.

As we mentioned, by 1965, half dollars were down to 40% silver. And after 1971, all half dollars were clad coins in base metal, though they made a 90% silver in 1992 and a 99.9% gold version in 2014. Kennedy half dollars have the presidential seal on the back, have the initials of designer Frank Gasparro (FG), and are based on the Kennedy Presidential Medal.

JFK’s neck also has a tiny monogram of Chief Engraver Gilroy Roberts, GR. When the coin was first released, buyers lined up around the block. And some complained that the GR looked like a hammer and a sickle – the anti-communist panic was huge at the time! In total, over a billion Kennedy coins were released to the public, and most of them were hoarded.

As for the bicentennial Kennedy half dollars, the US Mint coined over 500M from 1975 to 1976, all bearing the 1776 to 1976 date. But even today, few half dollars of any kind are found in circulation, and the US Mint has about 200M in storage. This may change after 2021 since it’s minted as an everyday coin and some of the sentimental attachment to JFK has dimmed.

The Silver in the JFK Half Dollar

When the dime, quarter, and dollar were switched to the Johnson Sandwich (cupronickel on the outside and copper in the middle), the metal ratio changed. For clad coins, the top and bottom layers were 25% nickel and 75% copper while the middle was all copper. So the total distribution was 91.67% copper with 8.33% nickel. The half dollar stayed silver a bit longer.

Eventually though, even the Kennedy half dollar had to acclimatize. But why did the coins stay popular with less silver? Well, the outside of the coin still looked sterling. Its outermost cladding was 80% silver and 20% copper while the inner layer was 79% copper and 21% silver. These newer coins had a lower melt value but were just as shiny, heavy, and pretty.

Common Errors in the Kennedy Half Dollar

With most coins, the errors are well-documented. They could be a misaligned die error like a TDR – triple die reverse. This is when the words and images seem to blur, double, triple, or quadruple because the die shifted during minting. Or it could be a damaged die that transferred a crack or blemish onto the face or rim of the coin. Or it may be a strike-through.

That’s when a foreign object slips between the die and the coin so the images are blurred. Struck through coins may be marred by tape, sleeves, apron fabrics, or unknown objects. But before we get into common Kennedy coin errors, let’s talk terms. A planchet is the blank that’s used for the coin. A device is the portrait or image, and the legend is the wording.

You may confuse the rim and the edge since most people use them interchangeably, but the edge is the reeded or smooth side while the rim is the embossed border that collars the coin. The mint mark and denomination are fairly straightforward bits of jargon, and you should be familiar with obverse and reverse. The field is the backdrop of the coin. Now for the errors:

Because so few JFK half dollars ended up in circulation, their condition is largely pristine and we’re not as familiar with their errors. You should also note that bicentennials come in six denominations, but only the quarter, the half dollar, and the Ike dollar had a special reverse for the commemorative coin. The dime, nickel, and penny kept their original tails.

Proof coins are minted for quality control. They’re used to countercheck the die and perfect the design of any coin, so a set goes into the archive for historic purposes. But because these coins are so shiny, a newbie coin dealer may rush to grab them. Slow down though – glossy proof half dollar coins don’t fetch as much as regular half dollars in uncirculated condition.

This is because proof coins have pretty privilege. They’re minted to be stored in a protective case, not to withstand the wear of daily use. So if your grandparents stashed their circulated half dollars in a sock drawer or cigar box, they’ll be in better grading condition than a proof, and will therefore fetch a higher price. Grading is done by assessors like the NGC and PCGS.

For PCGS – Professional Coin Grading Service – you have to be a paid member to submit coins. The lowest membership tier is $69, and coin evaluation ranges from $30 to $300+. At the NGC, you can get a basic coin review for free, but if you want an in-depth appraisal with a certificate, you can sign up for membership starting at $25. Both use the Sheldon scale.

This system grades coins from 1 to 70, with 1 being poor and 70 being premium. Mint State coins are graded MS60 to MS70 while AU (About Uncirculated) has four ratings – AU50, AU53, AU55, and AU58. Proof coins are categorized as PF60 to PF70, and the best prices come from Mint State coins and Proof Coins. Below are some verified prices for JFK coins.

The Hidden Value of Half a Buck

Today, most casino slots are coinless, but Kennedy half dollars are still a popular form of change at sporting events. But how much is a 1776 to 1976 half dollar worth? If you have a silver half dollar in lower mint states or AUs, it’s $1 to $5. Clad half dollars are worth 50c.

But if you can find a high-grade coin of MS63 or higher, you can get over $5,000 for it. Very few of these coins are in circulation, but since over half a million were minted, their resale value is on the lower side. Do you own bicentennial half dollars? Tell us in the comments!